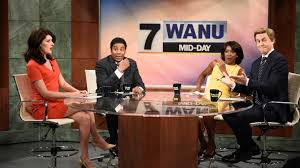 Please don’t let it be one of us… puh-lease! A recent skit from Saturday Night Live pretty much hit the nail on the head when we hear crime reports on our local news...
by Alycia Pascual-Pena October 10, 2019 1773 Views

Please don’t let it be one of us… puh-lease!

A recent skit from Saturday Night Live pretty much hit the nail on the head when we hear crime reports on our local news channels.

Cast members Phoebe Waller-Bridge, Kenan Thompson, Ego Nwodim and Alex Moffat poked fun at local news channels’ coverage of crime and its tell-tale signs of race during a segment on SNL on October 5. The comedians played fictional anchors at WANU-Channel 7 in Miami, Florida, who were relieved to find out the robbery suspect was white.

Waller-Bridge’s character laid out the details of an armed robbery at a gas station. Upon revealing the suspect was a white male, Thompson and Nwodim celebrated with a handshake and mutual expression of relief.

Trying to keep it professional, Thompson said, “We’re just glad that we know what the criminal looks like and he ain’t one of us.”

As the skit continued, another crime story rolled in that seemingly screamed white and wealthy.

“In other news, a Ponzi scheme has shaken some of Miami’s wealthiest residents,” Moffat said, to which Nwodim confidently responded, “That’s one of y’all for sure.”

Yet, Moffat evened the score when he revealed the suspect’s identity.

“He was arrested this morning in Boca Raton,” he said, as the monitor showed a mug shot of a Black man.

Things intensified when they handed things over to their meteorologist, played by Chris Redd.

“And that’s a white man’s name if I’ve ever heard one,” he added, proving that yes, even natural disasters’ nomenclature can be coded by race.

The skit continued hilariously as anchors detailed several incidents, including an assault at the mall over Air Jordans and a vandalism incident at a Cracker Barrel.

At the end of the segment, the anchors reported a story about a man dressed as the Joker.

“Dammit!” Waller-Bridge screamed, as Thompson said what we were all thinking, “We all know who that is.”