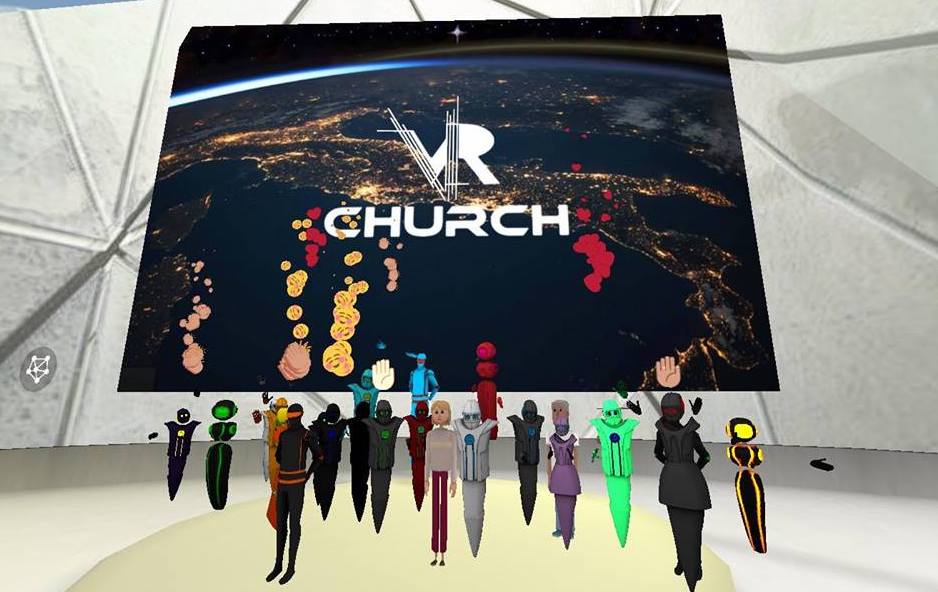 This Pastor Has An Online Church And Is Now VIRTUALLY Baptizing His Members! It’s Called Virtual Reality Church!

For many Christians, being baptized is the ritual of declaring your faith through a symbolic act of purification and rejuvenation. The ceremony, which is usually held in a...
by Raquel Jayson May 20, 2019 427 Views

For many Christians, being baptized is the ritual of declaring your faith through a symbolic act of purification and rejuvenation. The ceremony, which is usually held in a church or in a body of water, is performed by a church leader and can be a pretty powerful moment in your life, even if some are too young to remember it.

The VR Church, which exists only (for now) in the AltspaceVR platform, recently performed what they claim to be the first-ever VR baptism after holding the special ceremony to two of their church attendees in front of a congregation of over a 100 people from all around the world. Normally a baptism in the real-world takes about 10 seconds, but in VR, the individuals stayed under the virtual waters for over a minute, allowing them to really take in the moment for an even more impactful experience.

However, using technology to perform a baptism does raise some concerns from other church leaders about the validity of the VR Church’s sacraments. In the opinion of Alfonso Mendoza Jr. Pastor, Instructional Specialist and ARVR Enthusiast, “The Bible talks about water immersion baptism in which a believer makes a public confession of their faith,” during a twitter messaging exchange with VRScout, adding, “technology, although helpful to reach the masses, should not be used to substitute important events in a believer’s life.”

Pastor DJ Soto of VR Church, sees it differently. During an interview with VRScout, he said, “We brought up the topic of baptism in VR, and took some time to really think about it and discuss it, and came up with the conclusion that yes, we can do baptism in virtual reality.” Soto continues, “Because for us it’s symbolic, it’s about the symbolism of leaving the old life and coming into the new life.”

The idea of virtual churches isn’t new. When the platform Second Life became popular, users turned to it to find ways to worship. Even game streaming site Twitch has people using its platform for weekly congregations. But with VR technology evolving, and VR technology becoming more affordable, church-goers have access to a more immersive experience than Second Life and Twitch can’t provide.

Soto saw the potential of how VR could bring together people with the same religious belief together after he discovered the social VR platform, AltspaceVRand was amazed at how easy it was to navigate the platform, create events and invite people to rooms. It was at that point that he came up with the idea of building his VR Church. Two days later he found himself leading his first church service with a humble 5 people in attendance.

Today, VR Church gets an average of 30 people show up every Sunday to gather, discuss their faith and feel a sense of belonging. “I’m naturally a shy person – even at church –  and being in virtual reality helps me strip away my shyness,” said one AltspaceVR user wished to remain anonymous, adding, “being in a room with other people who are the same faith as me, who are from other parts of the world, makes me realize I’m not alone.”

Since AltspaceVR doesn’t have its own church environment, Soto worked with a developer from Japan to build his own environment and uploaded it onto the immersive social platform.

A church sermon in VR is a lot like church sermon in the real-world. There really is no difference other than the fact that you don’t have to travel. Instead, you are using a headset such as an Oculus Rift, HTC Vive, Samsung GearVR, Oculus Go, or a variety of other options via WebVR. This opens up the possibility for individuals with disabilities that prevent them from leaving their home to be a part of the church on a regular basis, or even become baptized. One thing Soto noticed, was a big jump in attendance when the Oculus Go was released.

As for the future of VR and religion, Soto, who also uses Facebook Spaces to connect with people, believes that it will be a good renewal of faith in the church, and hopes that other churches explore VR in the hopes of seeing its potential opportunities.

If you’re curious or would like to join Soto’s VR Church, you can simply create an AltspaceVR profile and log in every Sunday.

Of course there’s also a variety of other worthwhile VR experiences centered around other religions that may interest others. Nearpod is an excellent educational VR experience that takes users on an informative tour to historic Mosques around the world, while Experience Mecca provides a fully animated 3D field trip to the center of the Muslim faith. It’ll be interesting to see if other faiths follow suit and begin holding their own virtual congregations on other social VR platforms.

Husband, His Wife and Father Complete Journey to Graduate College Together!