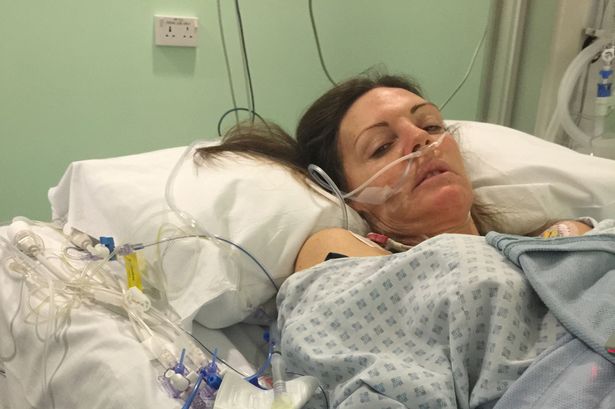 Andrea Sheardown, 48 was given just six weeks to live when she was diagnosed with cholangiocarcinoma, a rare form of cancer occurring in the bile ducts, in 2015 A...
by Raquel Jayson February 16, 2020 161 Views

Andrea Sheardown, 48 was given just six weeks to live when she was diagnosed with cholangiocarcinoma, a rare form of cancer occurring in the bile ducts, in 2015

A mom who was given just six weeks to live has stunned medics by making a complete recovery and is now preparing to scale Mount Everest.

Andrea Sheardown, 48, was diagnosed with cholangiocarcinoma, a rare form of cancer occurring in the bile ducts, in 2015 – and doctors told her there was nothing they could do for her, giving her just six weeks to live.

But the mom-of-two refused to give up and sought a second opinion – when surgeons agreed to operate, and removed a tumor the size of a pineapple.

Although doctors have warned her the aggressive cancer could return at any time, Andrea has refused to let her diagnosis stop her from living her life – and has gone on to complete a series of adrenaline-filled challenges.

And this week, she is flying to Nepal to hike to Everest base camp with her husband, Chris, 50, her 16 year old son, Sam, her sister and 11 other loyal friends who she calls Andrea’s AMMF Army, to reach the Everest Base Camp, which can take up to 12 days of trekking.

Since being diagnosed in 2015, Andrea has climbed Mount Kilimanjaro, completed the three peaks challenge and cycled from Vietnam to Cambodia with her daughter, Amelia, 18.

“The doctors have warned me that the cancer could come back at anytime but I’m trying to stay positive.

“Giving up wasn’t an option for me, I wanted to see my children grow up, be there for their key milestones in life – I had to stay strong for my family.

“People can’t believe that I have managed to do some of these things but life is all about challenging yourself – it’s something I teach my kids and that’s why they always come along with me.

“I’m so lucky with the support I’ve received from family, friends, local businesses and even complete strangers”.

In 2015, Andrea began experiencing severe pain in her rib cage which lasted for 6-8 weeks before she decided to go to A&E at her local hospital due to the serverity of the pain.

After being told it was just indigestion, Andrea, who owns a magazine advertising business, was fed up and demanded she be given tests to find out what the problem was.

Andrea was given blood tests, which came back as all clear.

She was then given an x-ray, which was the first step in diagnosing her with cholangiocarcinoma. The x-ray showed a mass on her liver and following a week of CT and MRI scans, she was told by the hospital that there was ‘nothing they could do’ and she was given just weeks to live.

Left with no options, Andrea and her husband, Chris, went to the Queen Elizabeth Hospital in Birmingham for a second opinion where they decided to offer Andrea a lifeline in agreeing to carry out intense surgery to remove the tumour from her liver which ended up being the size of a small pineapple.

Andrea said: “It was fantastic that the hospital offered me this lifeline, but it was also the hard work of my dad who trawled the internet in search of anything he could find out about this deadly cancer.

“He was the one that found the wonderful AMMF cancer charity. This then led us to other specialists in the cholangiocarcinoma field.

“They didn’t know whether I would survive the operation so I took a risk because I thought, it’s either this or I’m not going to be around for much longer.

“I’m so glad I took the risk because if I hadn’t, I would have died”.

Once the tumour was removed, the doctors told Andrea that there was no way of making sure the cancer had gone completely as bile duct cancer doesn’t show up in blood tests.

The hospital didn’t think Andrea would be strong enough to survive chemotherapy at the the time, but she felt strongly this route needed to be explored further, so she decided to go down the private care route which is when she found the Christie Clinic in Manchester.

Andrea underwent six months of intense chemotherapy which resulted in her becoming weak and extremely frail.

This Actress Says She Became Hooked On Heroine At Age 20