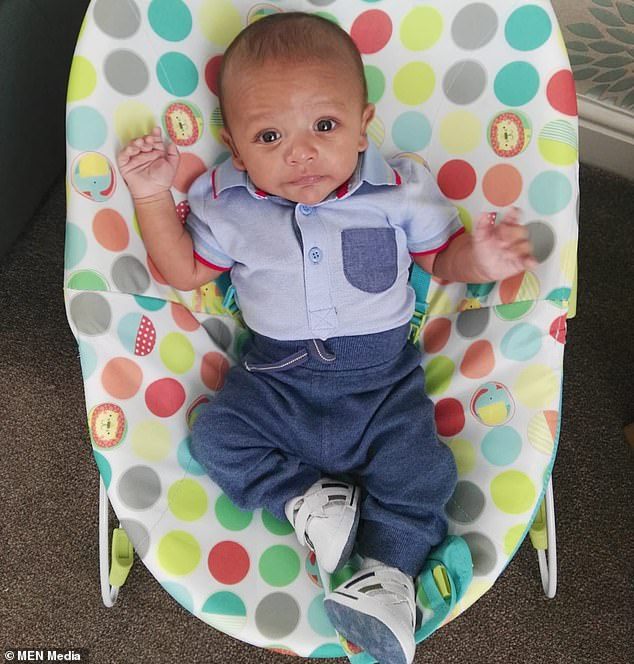 A GRIEVING mom begged hospital staff not to discharge her baby – just hours before he died of meningitis and sepsis, an inquest heard. Muna Aburizeq called an ambulance...
by Raquel Jayson January 14, 2020 253 Views

A GRIEVING mom begged hospital staff not to discharge her baby – just hours before he died of meningitis and sepsis, an inquest heard.

But when they got to Tameside Hospital she was told the youngster had a cold virus and he was discharged.

Mrs Aburizeq says she begged doctors not to send them home, telling them her son was “not right”, the Manchester Evening News reports.

His condition continued to worsen at home and she took him back to hospital later that night.

Tragically, he died from meningitis and sepsis a short time later in September 2018.

Speaking on the first day of a week-long hearing into her son’s death at South Manchester Coroner’s Court, Mrs Aburizeq said: “We went into a cubicle. He was in pain. He was crying.

“A lady opposite me said ‘What the hell is wrong with that baby?’ I said ‘I don’t know, I’m doing my best to calm him down’.

“A doctor came to me and said ‘he’s got a cold’. I was worried about his lungs because he was not breathing properly. You can’t argue with a doctor, you just trust the doctors.

You can’t argue with a doctor, you just trust the doctorsMuna AburizeqMum

“She said he’s just got a virus, a cold virus.

“A nurse came in, she said Mohammad was fine, we’re going to discharge him.

“I’m a normal mum, probably a bit anxious but that’s not just me. I just want justice. He was in so much pain.”

He had vomited and when she took his temperature it was over 38 degrees.

She also noted that his lips appeared blue and he was very pale and was advised by 111 to call an ambulance.

When Mohammad arrived at hospital for the first time, he was triaged by a paediatric nurse in the children’s area of A&E, and at first sight, he was alert, responsive, and interacting with his mum.

I begged [the nurse] not to send me home. I said ‘he’s not right, look at him’Muna AburizeqMum

But when the nurse took his vital signs, she discovered Mohammad had a temperature of 39 degrees and his heart rate was considerably faster than it should have been.

Due to this, she deemed his case to be urgent and immediately took the baby to resuscitation.

Hospital policy states that a sticker warning of a risk of sepsis should have been placed on Mohammad’s notes.

It can easily be mistaken for flu or a hangover in adults, but knowing the signs of meningitis can prove life-saving.

The deadly disease can affect anyone, but is most common in babies, young kids and young adults.

Meningitis causes an inflammation of the membranes that surround and protect the brain and spinal cord and can be triggered by bacteria or a virus.

If it is not treated quickly meningitis can develop in deadly septicaemia, or blood poisoning, that can cause permanent damage to the brain or nerves.

Around 3,200 people a year are diagnosed with bacterial meningitis and one in 10 die or are left with life-changing disabilities.

Viral forms of meningitis are less common and rarely life-threatening.

What are the key symptoms?

The symptoms of meningitis can develop very quickly, and include:

In babies the symptoms can be slightly different, they may:

The nurse said she had not done this, because she had immediately escalated his case to colleagues in resuscitation, where she expected a paediatrician to attend within a window of two to ten minutes.

The hearing also heard from Mohammad’s health visitor, who told the hearing he was a ‘beautiful lovely little baby’ who was ‘thriving, happy and sociable’.