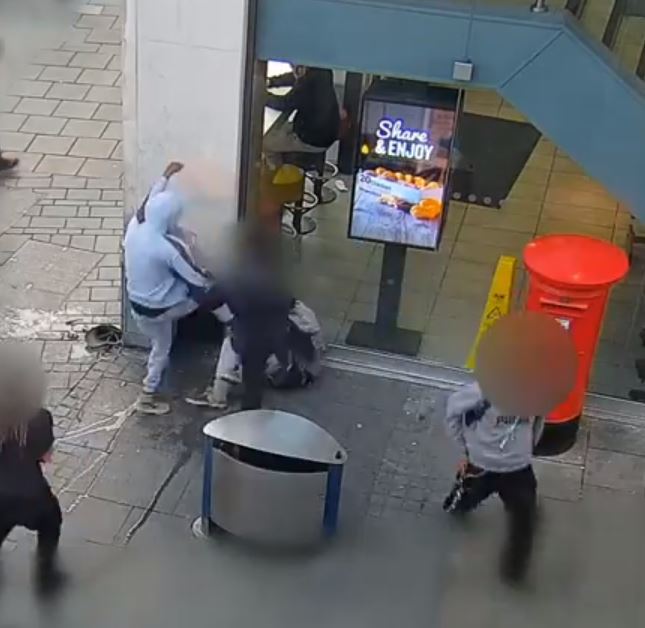 THIS is the moment a homeless man was drop-kicked and stomped on by a gang of thugs outside McDonald’s. Abdifathi Ibrahim, 20, was among the violent mob who carried...
by Zach Freeman February 23, 2020 174 Views

THIS is the moment a homeless man was drop-kicked and stomped on by a gang of thugs outside McDonald’s.

Abdifathi Ibrahim, 20, was among the violent mob who carried out the unprovoked attack in broad daylight in Bristol city centre.

Security cameras showed one of the thugs grab the victim as Ibrahim jumped on a rubbish bin and unleashed a drop-kick.

As the defenceless man fell to the ground, three others join Ibrahim in repeatedly stamping on his head and body.

The appalling attack continued for ten seconds, before the mob walked away in celebration, leaving the homeless man wreathing in pain.

Ibrahim was jailed on Thursday for four and a half years by Judge Euan Ambrose at Bristol Crown Court.

He had pleaded guilty to the attack, which happened on March 4 last year.

Another man and two youths who appear in the video have been dealt with separately.

Prosecutor James Haskell told the court it was pure luck that the victim was not seriously hurt from the unprovoked attack.

Mr Haskell said: “Mr Ibrahim and his friends then walked off almost celebrating what had just taken place.”

He added: “A witness called the police and Mr Ibrahim was arrested on August 21 last year.”

Ibrahim also admitted to assault occasioning actual bodily harm, which occurred between March 20 and 24 last year, and an affray on April 10.

A 71 And 72 Year Old Husband And Wife Found Guilty Of Smuggling Cocaine On A Cruise Ship!