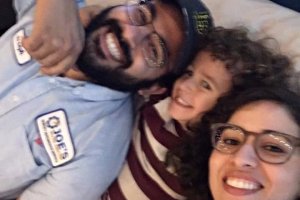 This Drunk Driver Killed This Entire Family. Father And Son To Be Buried Today Mom Died In Hospital Last Night

A third member of a Long Beach family who was struck by a suspected DUI driver on Halloween night has died, police confirmed Monday morning. From left to right:...
by Zach Freeman November 4, 2019 199 Views

A third member of a Long Beach family who was struck by a suspected DUI driver on Halloween night has died, police confirmed Monday morning.

From left to right: Joseph Awaida, 30, appears in a photo with his 3-year-old son Omar and wife Raihan Dakhil. (Credit: GoFundMe)

The victim, identified by police as Raihan Awaida, died Sunday at 9:03 p.m., the Long Beach City Police Department stated in a news release. The wife and mother was earlier identified as Raihan Dakhil in a GoFundMe post.

Awaida was walking on a sidewalk on Country Club Drive with her husband and 3-year-old son when the group was struck by a 2002 Toyota Sequoia near Los Cerritos Park.

All three family members were hospitalized in critical condition following the crash.

Joseph Awaida, 30, died from his injuries the following morning, police said. The couple’s child, identified on the GoFundMe page as Omar, succumbed to his injuries on Saturday.

Twenty-year-old Carlo Navarro was arrested on suspicion of driving under the influence and gross vehicular manslaughter, according to police.

Navarro was released after posting bail, which records show had been set at $100,000. No court date has been released and it was unclear if additional charges would be filed.

Funeral services for Joseph and Omar Awaida are set for 1 p.m. Monday at the Islamic Society of Orange County, family friend Brian Dokko posted on Facebook.

A GoFundMe page, as well as another fundraising page on LaunchGood, were created to help pay for the funeral services.