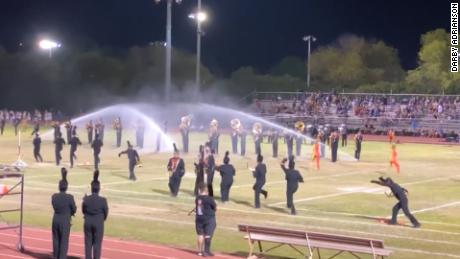 This Band Says You Can’t Rain On Their Parade! Sprinklers Came On And They Never Stopped!

The show must go on … even through a sprinkler fiasco. Corona del Sol High School’s marching band and color guard was in for a wet surprise during their...
by Raquel Jayson October 8, 2019 284 Views

The show must go on … even through a sprinkler fiasco.

Corona del Sol High School’s marching band and color guard was in for a wet surprise during their performance Friday night at a football halftime show.

The band had just started playing when three huge sprinklers in the middle of the football field turned on, shooting water at the musicians and dancing color guard.

The band, however, kept performing as if nothing was happening. The horns section took the brunt of the shower, marching and playing through a swift stream of water.

“And the band played on…” This was not a good scene, but, the kids kept playing until D told them to stop.
Not quite sure what the cause of this was, but, it could have been a lot worse. @cdsbandboosters pic.twitter.com/IpGglROSRN

The color guard did not miss a beat as they danced and leaped through the water. One was even standing in front of a sprinkler when it turned on, spraying water in her face as she kept twirling to the music.

David DuPlessis, the band’s director for 11 years, told The Arizona Republic he’s never seen anything like this before. He said the shower was an accident and the timers went off early for the sprinklers.

“The students were not exactly prepared for it but were able to recover and still put on a good show,” DuPlessis said.

The Corona del Sol band program has earned top placement in the highest division for the last 10 years, according to the Tempe Union High School District website. Some band members also performed with Katy Perry in the Super Bowl XLIX Halftime Show in 2015.

Here’s How To Order Starbucks Secret Menu Drinks Inspired By The ‘Friends’ Cast! Are You Watching The Reunion Tonight?

LIL KIM Squares Up With Protester GET OUT OF MY FACE … FUR REAL!!!