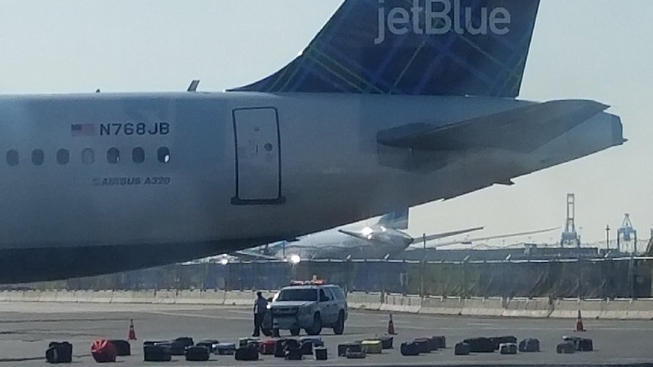 Nikki Morris WHAT TO KNOW Two flight attendants received a photo of a suicide vest or someone wearing a suicide vest, leading to the evacuation of a JetBlue plane...
by Raquel Jayson July 14, 2019 319 Views

A photo of a suicide vest or someone wearing a suicide vest led to the evacuation of a JetBlue flight at Newark Airport on Saturday morning, sources told NBC 4 New York.

The photo was airdropped to two flight attendants, who told the captain, the sources said. AirDrop is a way to transfer photos between Apple devices.

JetBlue Flight 573 was about to take off to Tampa around 7:20 a.m. when the flight attendants received the photo.

The plane returned to the gate, and 150 passengers were deplaned onto the tarmac via air stairs, according to the Port Authority.

“Out of an abundance of caution,” the plane was moved to remote area and passengers were deplaned and bused to the terminal, a spokesman said. He said the passengers and luggage would be rescreened.

The flight ended up departing Newark at 11:27 a.m. after going through additional security screenings, and was scheduled to arrive in Tampa at 1:54 p.m., JetBlue said in a statement.

No other flights were delayed.

Beyonce Steals The Show At The European Premiere Of The Lion King!