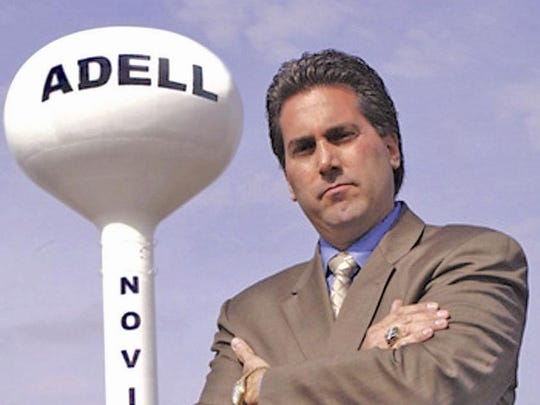 Local TV and radio station owner Kevin Adell admitted Sunday to sending a racially charged meme to Bishop George Bloomer, a North Carolina pastor who recently parted ways with his religious TV network over the direction of his show.

But Adell, the owner of WADL TV-38, 910-AM Superstation and The Word Network, denied creating the meme and said he sent it to Bloomer to “make him aware” of it.

Bloomer was one of the pastors depicted in the meme, which shows Adell draped in a white fur coat and fur hat, an image reminiscent of 1970s pimp caricatures, with four black pastors from The Word Network and a Lamborghini behind him.

“I’m offended by the picture as well,” said Adell. “I had nothing to do with the picture.”

Bloomer told The News on Monday that Adell showed him the meme on his phone during a visit by Bloomer to The Word network’s office last month. Bloomer said he was shocked and offended by the racially-charged meme and told Adell to “get rid of it.”

Bloomer said Adell told him he didn’t create the meme but the bishop said Adell found it comical. He said Adell texted the image to his phone after he left the station.

“He thought it was hilarious,” Bloomer said Monday. “I told him to get rid of it. This is not right. This picture and what you’re doing is akin to blackface.”

Bloomer said he left the station in September partly due to the offensive meme.

“This image is repulsive as it utilizes racial stereotypes and denigrates community leaders in the process,” the letter said. “It is doubly disturbing because your station’s marketing materials promote the Word Network and the 910-AM radio station as home to Black voices. Being complicit in sharing racist materials is both offensive and a betrayal to the audience base you court and claim to support.”

The organization said it will support a boycott called by ministers against Adell’s stations and social media. The Detroit chapter of NABJ has requested a meeting and apology from Adell, who said Monday he is willing to meet with the group’s executive board.

But, Adell said, “I’m happy to meet with NABJ. They’re my colleagues.”

Last week, a group identifying itself as Concerned African-American Clergy & Allies kicked off an online boycott of The Word Network. As of Monday afternoon, more than 3,700 people had signed the petition on change.org.

Bloomer, the senior pastor of Bethel Family Worship Center in Durham, N.C., said he did not organize the petition but that “people are calling from everywhere” to express support.

. Bloomer has said he plans to pursue a different network for his television show, which aired for eight years.

According to the online petition, Bloomer told Adell that the picture, sent to him in an electronic message, “is not funny” and “not good.”

“That pimp talk and hoe talk has racist connotations for Black people,” the online petition reads.

Adell said Bloomer, the former longtime host of The Word Network’s “Rejoice In The Word” Christian show, is using the picture “as a symbol to get attention.”

Adell said the controversy stems from a disagreement over Bloomer’s show and the station’s desire to have him improve his ratings. Both Bloomer and Adell say Bloomer left the show on his own and was not fired.

“He got upset that he needed to change the show,” Adell said Sunday. “I asked him not to leave.”

Bloomer briefly mentioned the controversy during a live sermon streamed via Twitter Sunday (the comment comes around 1 hour and 26 minutes into the stream).

The organizers of the petition drive against Adell and his companies are asking churchgoers, clergy members and others to boycott Adell’s companies and unfollow the Word Network on social media.

Adell said he is aware of the boycott and said, “Time will heal. Time will pass.”

As for the meme itself, Dodie Johnson, Adell’s station manager, said Sunday she found it online and shared it with Adell to show him what was out on social media about the station.

“It’s bad. It’s uncomfortable,” said Johnson, who is African-American. “We brought the picture to his attention.”

Detroit News columnists Henry Payne and Bankole Thompson host shows on 910 AM Superstation. Nolan Finley, The News’ editorial page editor, was fired from the station in August after hosting a morning show for two years.