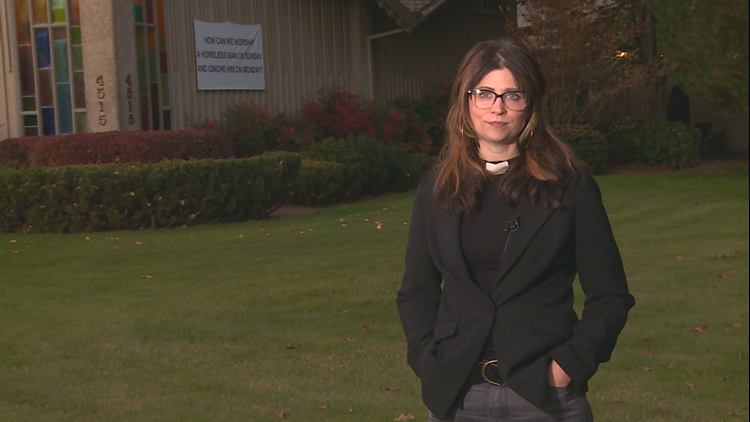 The Woman Pastor Is Not Afraid. She Says She Will Keep Feeding The Homeless Inspite Of The Fight With The City and Community

Shrouded in the pinkish hue of the rush hour’s setting sun, car after car cruised by the First Congregational United Church of Christ Thursday. Suddenly, one let out a...
by Raquel Jayson November 10, 2019 250 Views

Shrouded in the pinkish hue of the rush hour’s setting sun, car after car cruised by the First Congregational United Church of Christ Thursday.

Suddenly, one let out a honk.

The senior minister was standing in the Corvallis church’s front lawn.

Behind her a large, white banner nailed to the building’s façade offered the first clue as to what she was talking about.

From the road, the weatherproof banner is, by design, easy to see.

The tents, tarps and homeless men and women living in them are camouflaged by the wooded area just west of the church’s main driveway.

“I don’t think any of us imagined becoming real players,” said Butler of the issue. “We had no idea there were that many people in the forest.”

The church’s 1.34 acres of land is divided almost down the middle by that main driveway, which leads to a rear parking lot.

The woods that begin on the western side extend beyond the property line, onto a neighbor’s land.

Local authorities tell KGW people have been illegally camping in those woods for at least a decade.

“The issues that happen there sometimes ebb and flow, sometimes seasonally,” said Benton County Undersheriff Greg Ridler Friday. “People often find a good location for them to set up homeless camps, and then other people come in. We become aware of it. We respond. It’s cyclic.”

Undersheriff Ridler said a few years ago, Lin asked authorities to help him clear homeless camps from the woods on his property, which resulted in deputies citing campers for trespassing.

(Lin declined to comment for this story, except to say via phone that he “respects [the church’s] wish”.)

Butler said she learned of the routine this past summer, when one citation hit closer to home.

“One Sunday morning we were getting ready for worship,” she said. “A gentleman walked into the church and asked if I knew that someone had been arrested for trespassing on our front porch the night before.”

Authorities have not been able to confirm that specific citation.

“It made me curious, you know? Why? Why would someone be arrested for trespassing? The owner of a property usually has to complain, and we certainly hadn’t done that,” she said. “And we began by just asking law enforcement not to [cite] people.”

Reverend Bulter and her congregates were overwhelmed when almost two dozen people arrived seeking a place to sleep.Maggie Vespa

Word spread fast, and people desperate for a more permanent place to sleep came running to secure a spot.

“Within 24 hours of having taped off our property line for law enforcement, we had 23 people seeking safe sleeping space on our property,” Butler said.

Butler and her congregates were overwhelmed.

She said they’d already set up a port-a-potty on the property, assuming people camping next door would use it, “…but the reality of 23 people showing up asking for shelter… No, we did not anticipate it.”

But, she recalled, a consensus quickly emerged.

“From the moment those folks showed up, the congregation just said ‘Well, absolutely,’” she said. “When Jesus shows up on your front door, you take care of Jesus.”

The camp was there to stay, with the population capped at nearly two dozen.

That is, assuming they could make it legal and get neighbors on board.CHAPTER 2

When Benton County officials first got wind of the church’s undertaking, they hoped it would be a temporary solution to the ongoing problem of illegal camping in the woods.

“Because it was short-term and not permanent at that time, we viewed it as not subject to the county’s zoning regulations,” said Greg Verret, community development director with Benton County.

Verret said in an interview Thursday, officials gave the church permission to keep the camp intact for 90 days.

“We discussed what potential there was for making this a longer-term, more permanent facility,” said Verret, adding that church leaders and members have been communicative and cooperative throughout the process.

Even though the desire was clear, the path moving forward was not.

Complicated, because the church’s property exists in two municipal jurisdictions, with the building sitting on Corvallis city land and the wooded area containing the camp on Benton County land.

The western edge of the church’s driveway, in large part, marks the dividing line.

The idea of zoning a county property for temporary housing that’s run by an organization with a city address is the epitome of uncharted territory, said Verret.

“One potential way for the church to get approval for this is to obtain conditional use approval to establish church activities on the vacant parcel that’s in the county zoning,” he said, adding that’s one of a few options they’re examining.

Undersheriff Ridler agreed that question of jurisdiction creates confusion, adding that trying to respond to calls about criminal activity on county land owned by a Corvallis church is “…just a mess”.

A saving grace in the process, though, came unexpectedly from the Oregon state legislature.

House Bill 2916, which went into effect in June, amended an already existing state statute, allowing local governing bodies to authorize campgrounds inside urban growth boundaries, classifying them as “transitional housing” for the homeless.

It goes on to say those campgrounds “…may include yurts, huts, cabins, fabric structures, tents and similar accommodations…”, and it adds the agency or organization who set up the campground may provide parking, access to water, toilets, showers and other services.

It also leaving room for the Oregon Health Authority to step in later and develop “public health best practices” for those facilities.

Verret said Benton County is watching other municipalities around the state to see if and how they employ the new law, adding Benton County has been looking for a way to establish temporary housing facilities in recent years.

A 2017 report, cited by the Corvallis Gazette Times, estimated between 800 and 1,200 people experience homelessness in Corvallis and Benton County every year.

“This has been a path of discovery for both the county and the church in terms of finding out what rules exist, what opportunities there are and how we can best navigate that path to provide regulated but helpful opportunities for people who otherwise don’t have housing,” he said.CHAPTER 3

“This neighborhood has been in existence for 25 years. Probably half of it is owned by the original owners,” said Dan Armstrong.

The Corvallis attorney told KGW Thursday night he and his neighbors were caught completely off guard by the camp’s formation, adding they approached church leaders to ask what was going on.

Dan Armstrong said he and his neighbors were caught completely off guard by the camp’s formation.Maggie Vespa

“All of a sudden there was the tents and the tarps and the port-a-potty and the dumpster and the yelling and the fires and the smoke… You name it,” he said. “Bikes coming and going at all hours.”

Armstrong said, especially at first, the chaotic moments, particularly yelling and fighting at nighttime, were frequent and frightening.

Undersheriff Greg Ridler couldn’t give specific statistics on how often authorities were called, but told KGW Friday “…I’d probably say, during October, we were probably out [at the Safe Camp] ten times.”

He added, “Recent activity there has been diminished. It seems we have not responded there as much, but that doesn’t mean it’s gone away. It just that people are either A, not calling us because of the difficulty in enforcing a solution there or that the people have not engaged in so much activity that brings police response.”

He said he and his neighbors feel steamrolled by a group of church-goers who want to solve the housing crisis, adding he’s read local “Letters to the Editor” that call him out as being “prejudiced against the homeless.”

Of the author Armstrong said, “He lives three miles away from the problem. He is all in favor of putting the thing across the street from me, in my front yard, and then telling me that I shouldn’t complain about it. No. I suggested that if the tables were turned, he would be complaining about it if it was in his front yard.”

Skyscraper church: A look inside one of the world’s most modern and innovative places of worship