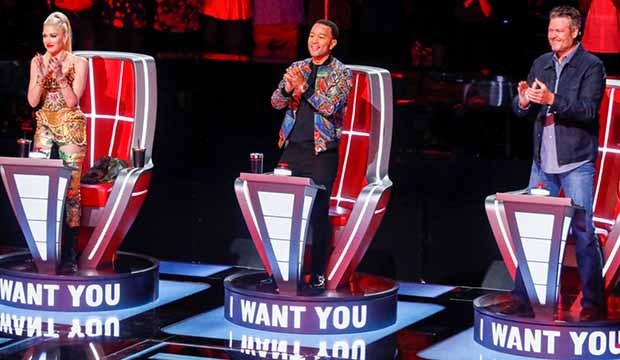 Now that the battles have begun on Season 17 of “The Voice,” who is your favorite advisor? Is it Normani (Team Kelly Clarkson), Will.i.am (Team Gwen Stefani), Usher (Team John Legend) or Darius Rucker (Team Blake Shelton)?

Blind auditions wrapped up on Monday, providing all four coaches with their teams of a dozen artists each. Battles immediately started so very good singers start going home right away. Have you chosen which contenders you like best and who might be out front for a Season 17 championship?

If you’ve missed any episodes or want to read our Gold Derby analysis, visit the links below to catch up on our coverage:

And now make your comments below and keep refreshing for our full live updating blog recap on Tuesday, October 15:

8:01 p.m. – Night 2 of the Battles kicked off with Kelly and Normani meeting Injoy Fountain and Alex Guthrie and for their rehearsal of “Home” by Marc Broussard. In the session Normani wanted Injoy to trust herself and her choices and Kelly wanted Alex to loosen up and feel freer in the performance.

8:08 p.m. – In the Battle both artists found a groove within the song and brought the right energy to the stage. It felt like a true battle in the sense that each of them challenged the other to up their game and both performed better because of it. The coaches panel was split in their opinions of which artist was better, but what mattered was Kelly’s decision. And that came down to who she thought would round out her team: Alex!

8:18 p.m. – Will.I.am joined Gwen for the first time this season for Elise Azkoul and Myracle Holloway‘s rehearsal to Ariana Grande‘s “Breathe.” In their advice, Gwen found that the two women lost their personalities when they weren’t finding the harmony with each other. Will told them they have to take control of their power and own it on stage with confidence.

8:29 p.m. – For a song that is so big when Ariana performs it, both Elise and Myracle took a more gentle approach to the lyrics and found a harmony with each other in the regard. It still felt like two very different artists adapting to one another rather than being authentic and I think both vocal performances suffered because of it. Gwen found both women to have performed emotionally, but ultimately she connected more to Myracle!

8:35 p.m. – We saw a small portion of the battle between Max Boyle and Matt New from Team John with Max besting Matt in their performance of “Let Me Love You.” And also EllieMae vs. Cali Wilson of Team Blake doing “Miss Me More” where Cali took the win.

8:40 p.m. – The last pairing we saw play out from rehearsal to performance was Destiny Rayne and Katie Kadan of Team John. They worked with John and Usher to figure out their duet of Elton John‘s “Tiny Dancer.” With such a big voice, Katie struggled scaling back in order to meet Destiny on her more tender level, but Usher loved those moments from Destiny because they felt special and signature.

8:51 p.m. – On stage, Katie was much more theatrical in her style than Destiny was, but somehow their very different styles worked well together and they certainly brought the best out of each other vocally. John was exuberantly proud of both of them and Kelly acknowledged that it was the first battle that earned a standing ovation from all four coaches. For John the decision between the two came down to Katie’s voice being like “magic” and so he stuck with her.

8:56 p.m. – That left Destiny up for a steal from one of the other coaches, and just as it seemed like none of them would go for her both Blake and Gwen hit their buttons as she walked off stage! Of the two, Destiny went with the coach that promised to help her build the connection to the audience and that was Gwen!

If You Love Vegas: MGM Resorts Have Sold The Bellagio