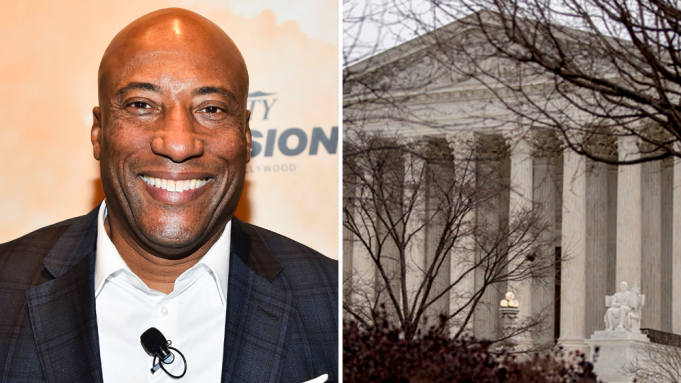 The Supreme Court sided with Comcast over Byron Allen in his racial discrimination case against the cable giant, ruling that in order for his lawsuit to survive, he bears the burden of showing...
by Raquel Jayson March 24, 2020 125 Views

The justices, in a unanimous decision, ruled that to prevail, “a plaintiff must initially plead and ultimately prove that, but for race, it would not have suffered the loss of a legally protected right,” according to the opinion. (Read it here).

The decision means that Allen’s lawsuit will go back to the lower court, where he can again try to prove his case, but he will have a much greater threshold to meet for his case to survive.

At issue was whether Allen’s $20 billion lawsuit should have survived beyond the pleading stage by merely proving that, in Comcast’s decision to deny carriage of his Entertainment Studios’ channels, his race was a “motivating factor” or whether it was the sole cause, also known as “but for” in legalese. The ruling was viewed as having a potentially significant impact on future racial discrimination cases.

The Ninth Circuit ruled in favor of Allen last year, but in oral arguments some of the justices found fault with the lower court’s reasoning. The justices showed clear skepticism of issuing a definitive ruling that established a lower threshold in racial discrimination cases when a case is first filed, and a higher one if it reaches a trial.

Justice Neil Gorsuch, who delivered the opinion for the court, wrote, “Here, a plaintiff bears the burden of showing that race was a but-for cause of its injury. And, while the materials the plaintiff can rely on to show causation may change as a lawsuit progresses from filing to judgment, the burden itself remains constant.” The opinion was posted online only, as the justices have postponed in-person proceedings out of concerns over the spread of the coronavirus.

At the oral arguments, Erwin Chemerinsky, who was arguing for Allen, acknowledged that he eventually would have to show that race was the sole cause for Comcast’s rejection. But he argued that it would be an “insurmountable burden” to meet if plaintiffs have to prove that at the outset of the case, as they would not have the benefit of conducting depositions and discovery.

The case hinged on a section of the Civil Rights Act of 1866 that holds that African Americans must have the same right to contracts as whites.

A number of civil rights groups, including the NAACP Legal Defense & Education Fund, sided with Allen in the case, while the Department of Justice supported Comcast’s position.

In a statement, Comcast said, they “are pleased the Supreme Court unanimously restored certainty on the standard to bring and prove civil rights claims. The well-established framework that has protected civil rights for decades continues. The nation’s civil rights laws have not changed with this ruling; they remain the same as before the case was filed.

They added, “We now hope that on remand the 9th Circuit will agree that the District Court properly applied that standard in dismissing Mr. Allen’s case three separate times for failing to state any claim.”

The company has defended its diversity record, and said that “we will continue to look for ways to add even more innovative and diverse programming that appeals to our diverse viewership and continue our diversity and inclusion efforts across the company.”

In a statement, Allen decried the decision. “Unfortunately, the Supreme Court has rendered a ruling that is harmful to the civil rights of millions of Americans,” he said. “This is a very bad day for our country. We will continue our fight by going to Congress and the presidential candidates to revise the statute to overcome this decision by the United States Supreme Court, which significantly diminishes our civil rights.”

That the justices reached a unanimous decision was a bit of a surprise, given the partisan divide on the court. Justice Ruth Bader Ginsburg, in a concurring opinion, wrote that “the court holds today that Entertainment Studios must plead and prove that race was the but-for cause of its injury—in other words, that Comcast would have acted differently if Entertainment Studios were not African- American owned. But if race indeed accounts for Comcast’s conduct, Comcast should not escape liability for injuries inflicted during the contract-formation process. The Court has reserved that issue for consideration on remand, enabling me to join its opinion.” Ginsburg was not present for oral arguments because of illness, but she did participate in deliberations.

Kristen Clarke, president and executive director of the Lawyers’ Committee for Civil Rights Under Law, said that the ruling will make it more difficult for plaintiffs in civil rights cases.

“This ruling weakens our nation’s oldest civil rights statute and may shut the courthouse door on some discrimination victims who, at the complaint stage, may simply be without the full range of evidence needed to meet the court’s tougher standard,” she said in a statement. “That said, the court has ordered the district court to review its earlier decision to determine whether [Byron Allen’s] claims satisfy the standard. We will be watching closely to ensure that courts give discrimination victims a fair opportunity to be heard in these cases.” Her organization was part of an amicus brief in the case.

Ava DuVernay & Netflix Win ‘When They See Us’ Defamation Suit