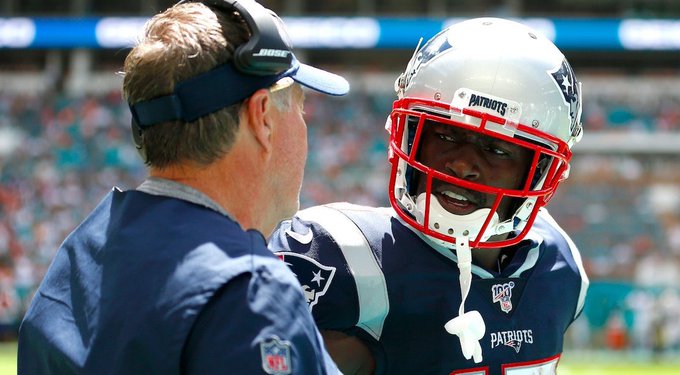 The Patriots Have Release Wide Receiver Antonio Brown Amidst Allegations

The New England Patriots released embattled wide receiver Antonio Brown on Friday, less than two weeks after signing him. “We appreciate the hard work of many people over the past 11 days, but...
by Raquel Jayson September 20, 2019 855 Views

“We appreciate the hard work of many people over the past 11 days, but we feel that it is best to move in a different direction at this time,” the team said in a statement.ADVERTISEMENT

Brown, who had practiced with the team earlier Friday, tweeted his thanks to the organization shortly before the move was announced.

Thanks for the opportunity appreciate @Patriots

Brown has been accused of sexually assaulting his former trainer, Britney Taylor, according to a civil lawsuit she filed Sept. 10. A source previously told ESPN’s Jeff Darlington that Brown declined to sign a $2 million-plus agreement with Taylor in a proposed settlement.

Taylor met with the NFL on Sept. 16. A source had previously told ESPN that there are “more interviews and information-gathering being conducted now beyond Taylor.”

Reached Friday by ESPN, the NFL said it would not discuss details about its ongoing investigation.

It remains unclear when or if Brown will interview with the league.

In addition to the lawsuit, Brown faces another allegation of sexual misconduct by a female artist who was working at his Western Pennsylvania home in 2017. That allegation was part of a Sports Illustrated report published Monday that detailed domestic incidents involving Brown, a charity auction theft and multiple unpaid debts.

On Thursday, the lawyer for the artist reached out to the NFL after Brown apparently sent what were described as threatening text messages to her client. The sides spoke Friday morning, with the woman’s attorneys saying in a statement that the league “pledged to conduct a thorough investigation under its Personal Conduct Policy.” According to that statement, the league also contacted the Patriots, who then directed Brown to have no further contact with the woman.

Brown scores TD in only game with Patriots

In his only game as a Patriot, Antonio Brown finishes with four catches for 56 yards and a touchdown as New England routs Miami.

Brown, 31, made his debut with the Patriots last Sunday against the Miami Dolphins, totaling four catches for 56 yards and one touchdown.

On Thursday, Brown answered four questions from reporters, which marked the first time he had addressed the media since joining the Patriots. He was not directly asked about the civil lawsuit, or the allegations of sexual misconduct.

“I’m just here to focus on ball,” Brown said in an interview that lasted just one minute, when asked if he had heard from the NFL about his availability.

Brown, however, will likely not get the bonus because of a representation warranty clause that calls for a player to disclose any situations that may prevent continued availability, a source with knowledge of the contract told ESPN’s Jeremy Fowler.

Brown, instead, likely will only be paid by the Patriots for Week 2 and Week 3.

“It’s unfortunate things didn’t work out with the Patriots,” the receiver’s agent, Drew Rosenhaus, said. “But Antonio is healthy and is looking forward to his next opportunity in the NFL. He wants to play the game he loves and he hopes to play for another team soon.”

New England is 2-0 this season, winning both games by a combined 76-3. The defending Super Bowl champs host the New York Jets on Sunday. According to Caesars Sportsbook, New England’s odds to win that game went from -22.5 to -21.5 after Brown was released. The over/under went from 44 to 43.5, per Caesars.

Sister Of Botham Jean Is Mad