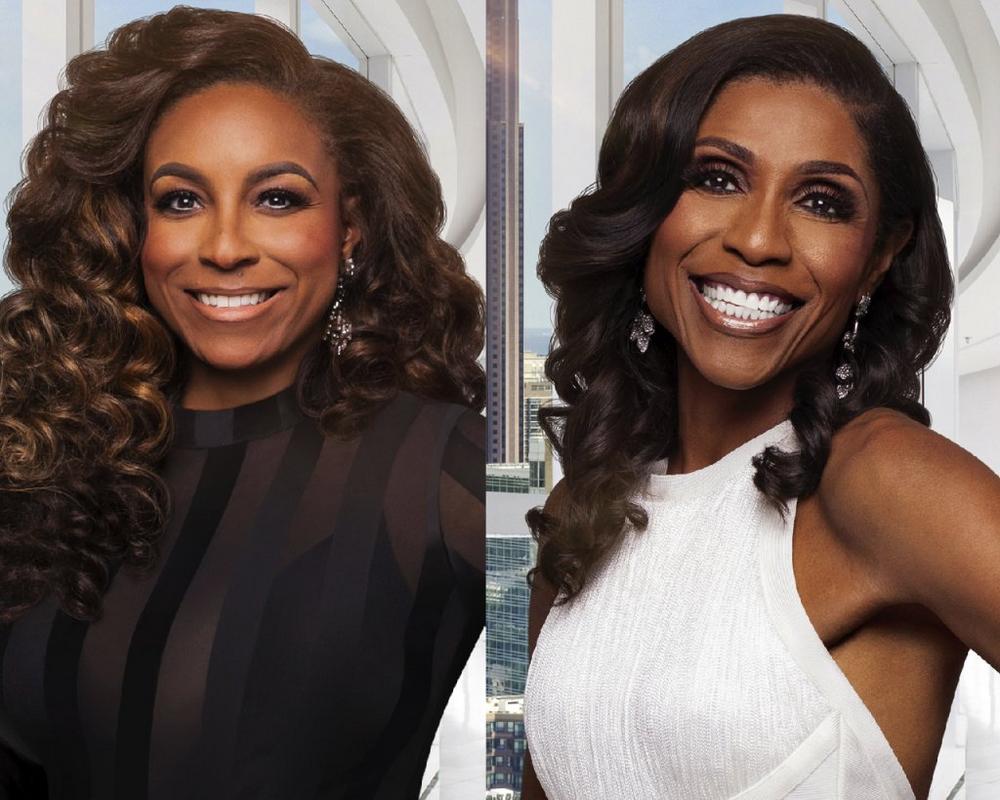 Married To Medicine newcomer Buffie Purselle is calling out one of the show’s OGs, Dr. Jackie Walters, for allegedly putting a private detail about her life on blast before a group of strangers....
by Raquel Jayson November 16, 2019 325 Views

Married To Medicine newcomer Buffie Purselle is calling out one of the show’s OGs, Dr. Jackie Walters, for allegedly putting a private detail about her life on blast before a group of strangers.

In a preview for an upcoming episode of the Bravo reality show, Purselle can be seen looking on in shock while Dr. Jackie told a crowded room that Purselle is “infertile.” The reality show veteran was relating her own struggles with fertility when she made the comment.

“Four years ago, I got breast cancer, and the thing that we grow up, most of us wanting to do, you can’t do,” she said. “And Buffie, you can relate. You’re infertile.”

After the clip was posted to social media and Bravo’s website, Purselle took to Instagram to share how she felt about the unexpected recognition, which she called “one of the most humiliating and painful moments in my life.”

RELATED: Joseline Hernandez Made Her ‘Married To Medicine’ Debut This Week And Already Has An Enemy

She explained in the post that she and Dr. Jackie have only had surface-level conversations about her struggles with fertility and have never had a comfortable enough rapport to warrant her sharing such a personal detail from her life.

“When you first meet someone and they see that you are happily married they ask the inevitable question, ‘Do you have kids?'” she wrote. “I always answer no. No — period. Then SOME people ask, ‘Why NOT’ as if my husband and I have done something wrong. I am then forced to explain my many failed attempts at motherhood. This is the level of discussion that Dr. Walters and I had regarding my CHALLENGES with fertility.”

She went on to criticize Dr. Jackie’s comment and her intentions, adding that she is adamant that she called her out with the sole purpose of embarrassing her.

“To call another woman infertile is cruel,” she added. “That word doesn’t begin to describe the type of person that I am… I believe that Dr. Walters said this with malicious intent because she could have said many other things about me if she truly wanted to relate to me.”

Purselle also added that Dr. Jackie “has NEVER offered me a sincere apology” to date.

This was one of the most humiliating and painful moments in my life. I am proud that I was able to rise above my pain and embarrassment and conduct myself as the lady that my Mother and Grandmother raised me to be. When you first meet someone and they see that you are happily married they ask the inevitable question “do you have kids?” I always answer no. No – period. Then SOME people ask “why NOT” as if my husband and I have done something wrong. I am then forced to explain my many failed attempts at motherhood. This is the level of discussion that Dr. Walters and I had regarding my CHALLENGES with fertility. To call another woman infertile is cruel. That word doesn’t begin to describe the type of person that I am. The clinical definition is that you are unable to GET pregnant. Well, I can and have gotten pregnant many times. I was just unable to carry my babies to full term. Additionally, it means that you bear no fruit. Well, I like to think that I have been a productive member of society and that my mark will be left through philanthropy. I believe that Dr. Walters said this with malicious intent because she could have said many other things about me if she truly wanted to relate to me. We are both successful businesswomen, we are both extremely organized, we both do a lot of charity work, the list goes on and on but she settled on this. And to date, she has NEVER offered me a sincere apology. I don’t want an apology from her anyway because she doesn’t think that she did anything wrong. A mouse has more emotional intelligence. For all of the people saying this is some sort of editing trick – sadly it’s not, it happened, and being forced to relive it on television and social media hasn’t been fun. Thank you to everyone for the positive words of encouragement. The kindness of strangers will never cease to amaze me. I’m fine. I’m tougher than I seem and this too shall pass. I am thankful to know who my REAL friends are on the cast @drsswhit @iluvmariah and @toyabushharris and thanks #Lake and #DrJarret 💜💜💜 #married2med

In addition to her lengthy social media post, Purselle wrote an op-ed piece for TheClosetRatchet, where she further called out the OB/GYN for the offensive comment.

In it, she criticized Dr. Jackie’s and some of the Married to Medicine‘s viewers’ alleged claim that she is overreacting, and stressed that she felt stabbed “in front of everyone” in the moment.

Imagine going to a party, and someone that you know walks up  — and stabs you in front of everyone. You first experience shock as you grasp at the wound, but then you attempt to hide the injury to avoid scrutiny – “That didn’t hurt!” You try to fight back the tears from the pain of your bleeding wound. “You are getting blood all over the floor!” When you finally do show the injury, you are asked: “what did YOU do to get stabbed?”

Obviously, this is a dramatized metaphor, but it describes a recent experience I had being verbally stabbed in front of a group of strangers with a knife in the form of “Buffie, you are infertile.”  This statement, being proclaimed for all to hear, pierced me deeply. The weight of this took a moment to register, but once it did, I realized I was bleeding profusely. I showed a brief moment of distress but quickly pulled myself together and carried on as if I wasn’t severely wounded. This is how I was raised. I was able to find some strength from within somehow, and apply the skills for appropriate social interactions so as not to further draw attention to myself.  After all, the event I was attending was not about me, and I was determined to keep it that way.

When I finally mustered the strength and presence of mind to confront my attacker, I was accused of being “too sensitive.”  Too sensitive? What does that actually mean? At face value, it suggests that my reaction to the statement was inappropriate or overblown.  Dig deeper and what that statement really says is that both my feelings and my response are invalid.

The word infertile doesn’t begin to describe me clinically or as a person.  My husband and I have had fertility challenges, but we can and have gotten pregnant.  I have been unable to carry my babies to full term. It’s incredibly difficult even to share my experience because I still feel like I failed at something that every other woman in the world can do. I identify with Michelle Obama and her struggles with fertility, as written in her book, “Becoming.” I wept as I read her words – “A miscarriage is lonely, painful, and demoralizing almost on a cellular level.”

Since nobody’s experience is the same, even in shared situations, it is impossible to understand how a significant event may impact someone else fully.  Projecting what you think your reaction would be onto someone else is unfair and can be insensitive and unempathetic. Repeatedly dismissing another’s emotional reaction to experienced insults verges on bullying and victim shaming.  Just because I have a reaction that others may not does not mean my response is wrong.

So what happens when we are repeatedly told that our emotions are wrong?  We begin to question them ourselves. At the moment, this internal conflict can be confusing and result in a reaction that can mask the true emotion.  Pushing aside uncomfortable emotions like anger, shame, and embarrassment and displaying a more “socially acceptable” emotion can become an overcompensation and result in behaviors that may be confusing to others.  In the moment of my “stabbing,” I pushed aside the immense negative emotions I was experiencing and relied on what I have learned from previous situations – saying “ouch” will cause me more pain, so I will pretend it doesn’t hurt.

The subsequent victim shaming and bullying I endured via social media only compounded the humiliation.  This will undoubtedly influence my reaction to the next embarrassing situation in which I find myself, and yes, I might seem to some to be “too sensitive.”  I make NO apologies for my hurt, sensitivity, or my anger. And, am certainly not asking anyone else to “validate” my feelings or reactions. I am not perfect. But, I am woman enough to own who I am (and also appreciate there is room for growth,  self-improvement, humility, and forgiveness). So, for any “haters” out there — my reactions and emotions are just that MINE. What happened to me happens to millions of women each day. And why is that? Why do we always judge each other so harshly for just being human?   Why is that society relegates anything remotely emotional to acting “like a girl.” As if that is somehow lesser than.

Ironically,  the event that I was attending that night was meant to promote a major accomplishment, uplift, and empower other women.  I challenge us ACTUALLY to begin promoting, uplifting and empowering other women. Empower us to not only be strong and confident and to run the world but also to be vulnerable and human and empathetic to others.

I am calling for a moratorium on the use of the words “too sensitive.” Have you considered that maybe, in fact, YOU are not sensitive enough?

Do you guys feel that Dr. Jackie was wrong for calling Buffie ‘infertile’? Feel free to share your thoughts and tune in to #Married2Med on Sunday, November 17th at 9p.m. EST!

This Pastor Has Had 5 Funerals From Overdose Within A Week Or So Span. He Says There Has To Be An Answer