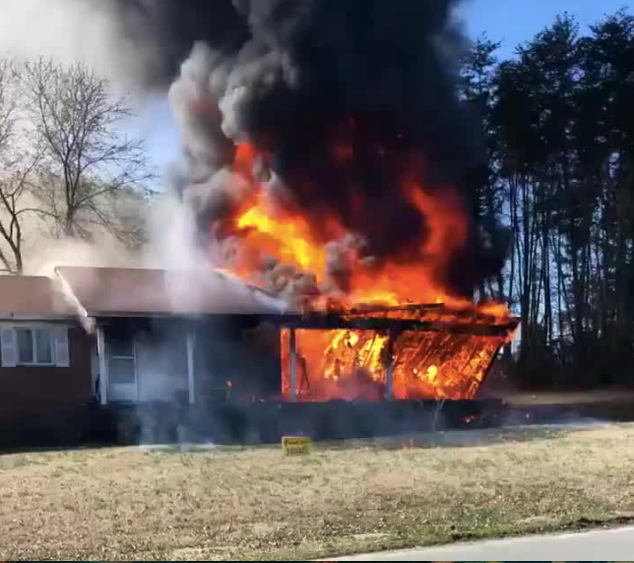 Sunday morning Don Hale was sitting in his church pew at New Friendship Baptist Church. His pastor’s sermon came from the book of Second Corinthians.

As he sat there, with his wife Brenda was at home resting from feeling ill. Don Hale’s son-in-law walked through the church doors and found him.

He went up to Hale at the church and said, “Brenda’s alright, but your house is destroyed. You need to come on home.”

As Hale pulled up to his house on Compton Drive, the place he and his wife have spent most of their 48 years of marriage was consumed by smoke, flames, and water fired out of jet cannon water hoses by firefighters.

That morning, for a reason fire investigators still have not determined, a fire sparked in the garage. A fire spread through their garage, caused three small explosions from a propane tank, gas grill, and a car before it consumed more than half of their home.

Monday morning, roughly 24 hours after the chaos, he walked around what was left of his family home. Don Hale explained that his wife was in her bed when she heard the sound of the fire alarms.

“She came up and there was smoke and all, engulfed in the house. She tried to knock out the [living room] window. She couldn’t get the front door unlocked because it has a deadbolt in it,” he said.javascript:false

For some reason, in the midst of the commotion, Brenda Hale couldn’t find a way to unlock the deadbolt. Instead, she tried to punch her way through the glass of the living room.

As she did this, small explosions from the burning garage alerted neighbors across the street.

One woman, who did not want to be identified, explained that the sounds actually activated her nearby doorbell cameras.

When she went to the door she saw the horror that had begun to consume her neighbor’s house. She called 9-1-1 and then her daughter who lives next door to her.

Her daughter’s husband, without hesitation, ran over to the burning house. The woman said that he tried to jump up and yell into the back bedrooms, furthest from the flames.

Unable to hear anyone, he ran to the front of the house where he saw Brenda Hale as she frantically tried to break open the window.

He then told her to go to the front door.

Don Hale said what happened next was an act of God or the actions of a guardian angel. Despite the door being dead-bolted, the man was able to force his way through it and pulled Brenda Hale from the flames.

She was then carried next door to be treated, as she watched the rest of her house, the place she made a home for more than four decades, burn to the ground.

“She called him her guardian angel. And I mean, if it wasn’t for him, she would’ve burned up in it,” Don Hale said Monday morning as he stepped over pieces of his ceiling that now litter what’s left of a living room.

The couple has been able to recover photo albums and China dinnerware passed down through the family.

“It’s sort of like losing your leg. If you lost your mate, you sort of lose your desire to live. He saved her,” he said.

They are getting help through a GoFundMe page and through various churches in their community.