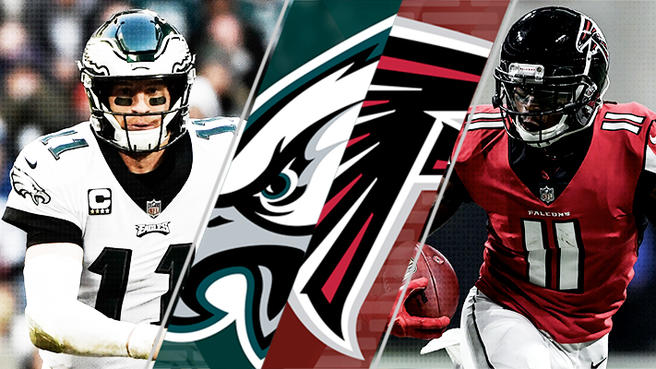 The Falcons win, barely, a game they had to win

For reasons we’ll explore herein, this stopped short of being a Statement Win. But when you’re the Atlanta Falcons and you’d lost the same game twice in Philadelphia in...
by Raquel Jayson September 16, 2019 186 Views

For reasons we’ll explore herein, this stopped short of being a Statement Win. But when you’re the Atlanta Falcons and you’d lost the same game twice in Philadelphia in calendar 2018, you’re thrilled to have survived the Eagles in 2019. For the home side, that’s pretty much what this night was – a matter of survival.

On a night when the Falcons again seemed a stronger team than Philly, they could have again lost it at the end. This time they didn’t. This time Nelson Agholor dropped a lead-pipe touchdown pass inside the final two minutes. This time Zach Ertz got stopped by Isaiah Oliver a few inches short on fourth-and-8. This time the Falcons got the ball to Julio Jones at winning time.

This 24-20 victory keeps the Falcons from a dreaded 0-2 start. Heck, it thrusts them into a three-win tie for first in the NFC South, a division over which the uncertain status of Drew Brees’ thumb hangs heavy. It’s possible that, come the New Year, we’ll look on this game as the launch site for a Falcons’ playoff run.

That said, let’s not warm the bandwagon for Miami just yet. It’s also possible the Falcons just lucked out.

Their defense kept the Eagles from doing much until the end, though the visitors were running low on wideouts and quarterback Carson Wentz wasn’t feeling so hot himself. Having absorbed multiple hits and thrown two interceptions that might have been a half-dozen, he had to sit out half a series at the end of the first half. When Philadelphia fumbled the second-half kickoff, the Falcons moved smartly to make it 17-6, and the temptation was great to deem this done and dusted. Then you recalled 28-3, and you thought, “Nah.” ADVERTISING

A Philadelphia native brought Philadelphia back. Trouble is, Matt Ryan plays for the Falcons. His second interception of the night teed up the Eagles for their first touchdown. His third – his fifth of the season, and this was Week 2 – was a horror. On second-and-6 from the Philly 8, Ryan threw toward Austin Hooper in the end zone. Linebacker Nathan Gerry, situated in front of Hooper, caught the ball. For the second week running, the best quarterback in franchise history took points off the board.

The Eagles nosed ahead on the sort of drive Doug Pederson’s team has made its signature – lots of short stuff. (Given that Alshon Jeffery and DeSean Jackson, their big hitters, were injured, they had little choice.) Four times they converted on third down. With 3:13 to go, Wentz scored to make it 18-17. Then he found Ertz for a 2-point conversion. Darned if those Eagles weren’t doing it to the Falcons again, and this time Nick Foles was nowhere in sight.

This time, however, the Eagles couldn’t blunt the Falcons’ final thrust. On fourth-and-3 from the 46, Ryan sensed that Jim Schwartz’s defenders would bring the big heat and checked into a tunnel screen to Jones. The pass didn’t travel far, but left tackle Jake Matthews’ wipeout block of safety Rodney McLeod freed Jones to go the distance.

Said Falcons coach Dan Quinn: “Jake had a hell of a block to spring him. If you don’t have a good angle on Julio, it’s going to be tough.”

Then: “We had two options. It was a check play … It’s a short play, but it can hit big. Hit it against a zero blitz and you can make it.”

Ryan: “Julio in space is the best receiver in the game.”

That wasn’t nearly the end, though. The Eagles had 2:10 to fashion a response. They nearly did it on the first snap after the two-minute warning. Agholor shook free down the left sideline, safety Keanu Neal having failed to rotate in support of Oliver. All Agholor had to do was catch the ball and not trip over his feet. He dropped the ball.

Soon it was fourth-and-14. Wentz threw while being hit by Adrian Clayborn. Somehow the looping pass fell into the arms of Agholor, who’d somehow gone uncovered down the middle of the field. (Said Quinn of his defense: “It’s a call we feel good about.”) The jaw-dropping 43-yard gain positioned the Eagles to steal another from the Falcons, but this time the northern Birds fell a foot short. Did the law of averages finally catch up to these teams?

It was no great shock that the Falcons chose to rave about resilience. Said Quinn: “I’m proud of the toughness of our team. We told them after the game last week that there’s a big difference between playing hard and playing well. Tonight we come back and get a fourth-down stop. It showed a lot about our team.”

Said Ryan of the magnitude of this four-point victory: “It’s important. When you go through these tough battles against good teams and things don’t always go your way and you battle through it, it’s good for the psyche.”

Quinn: “How do you respond when you get hit?”

Ryan: “No matter what happens, (you’re thinking) you’re going to go out there and make the play the next time you have that opportunity. I’m proud of the way everybody had that mindset the whole time.”

This is the way of the NFL. Winning absolves all sins – until, that is, those sins put you in a hole from which there’s no recovery. That’s what happened in Week 1 against the Vikings: The Falcons messed up so badly they gave themselves no chance. They never let this game get out of hand, even though they could have been the team that put its opponent to bed early. That they weren’t makes us wonder. That they overcame their own lapses reminds us that, for all its inconsistency, this remains a gifted bunch.

And there, early on a Monday morning, is where we’ll leave it. The Falcons won a game they almost had to win, but they won by such a fine margin that you wonder if this was a major breakthrough or just one of those given Sundays where the coin came up heads. I’d love to tell you I knew one way or the other, but I’d be lying.

She Dreamed She Swallowed Her Wedding Ring And When She Woke Up She Had Really Swallowed It!