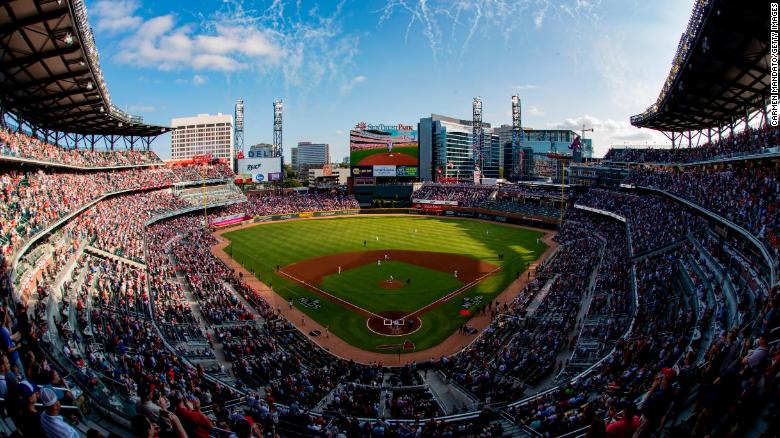 The Braves played the Cardinals on Wednesday at SunTrust Park near Atlanta. Atlanta (CNN)There were some changes during the Atlanta Braves game Wednesday after the team announced it is taking steps...
by Raquel Jayson October 9, 2019 226 Views

The Braves played the Cardinals on Wednesday at SunTrust Park near Atlanta.

Atlanta (CNN)There were some changes during the Atlanta Braves game Wednesday after the team announced it is taking steps to “reduce” the Tomahawk Chop, an arm movement done by fans to cheer on the team.It comes after St. Louis Cardinals’ rookie Ryan Helsley, who is a member of the Cherokee Nation, called the chop disrespectful.The Tomahawk Chop is widely used during Braves games as fans move their forearms forward and backward with an open palm in a chopping motion. The Braves often leave a foam tomahawk on the seats for fans during home games. Wednesday, the foam souvenirs were not distributed.

A Braves fan holds a foam tomahawk.”Out of respect for the concerns expressed by Mr. Helsley, we will take several efforts to reduce the Tomahawk Chop during our in-ballpark presentation today,” a spokesperson for the Atlanta Braves told CNN.”Among other things, these steps include not distributing foam tomahawks to each seat and not playing the accompanying music or using Chop-related graphics when Mr. Helsley is in the game.”Helsley expressed his concerns after Game 2 of the National League Division Series on Friday.”I think it’s a misrepresentation of the Cherokee people or Native Americans in general,” Helsley told the St. Louis Post-Dispatch. “It’s not me being offended by the whole mascot thing. It’s not. It’s about the misconception of us, the Native Americans, and it devalues us and how we’re perceived in that way, or used as mascots.”

St. Louis Cardinals relief pitcher Ryan Helsley called the Tomahawk Chop disrespectful.”That’s the disappointing part. That stuff like this still goes on. It’s just disrespectful, I think.”While the change was just for Wednesday’s game, the Braves statement said they will continue to evaluate elements of their brands and the in-game experience.”We look forward to a continued dialogue with those in the Native American community after the postseason concludes,” the team said.Earlier this year, Maine’s governor signed a bill making the state the first to prohibit public schools, colleges and universities from using Native American symbols as mascots. Last year, the Cleveland Indians announced they are no longer featuring their Chief Wahoo logo, which has been widely characterized as offensive and racist.

The MLB Dodgers Are Going For The Win Tonight!