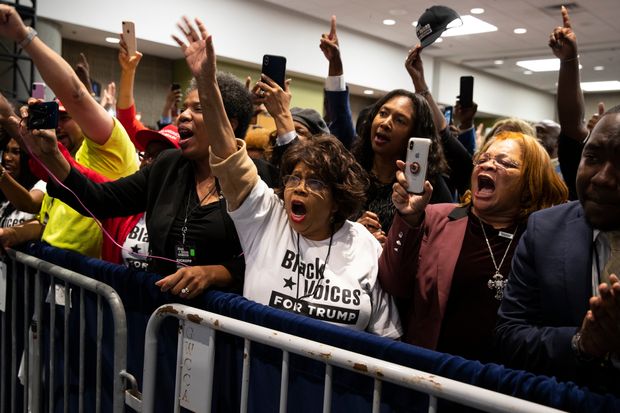 The nation − and may be even  the world − is watching as President Donald Trump and Vice President Mike Pence descend on Atlanta for a high-dollar fundraiser and effort...
by Raquel Jayson November 9, 2019 241 Views

The nation − and may be even  the world − is watching as President Donald Trump and Vice President Mike Pence descend on Atlanta for a high-dollar fundraiser and effort to court black Republicans Friday.

Trump is slated to collect about $3.5 million in Atlanta via Georgia Trump Victory, a collective effort between the RNC, Trump campaign and U.S. Sen. David Perdue’s campaign. More than 300 were expected to attend the fundraiser, and some of the attendees represent the president’s initiative to attract more African American supporters, Black Voices for Trump.

From the looks of social media, Trump’s initiative and the fundraiser had done just that. Some took to Twitter to express their fervor for the president’s 2020 campaign and explain why they support the president. Jermaine Enoch, a business man from Powder Springs, plans to vote for Trump, because of his track record of getting results.

“ I’m a Trump supporter, because Trump is a business man and he gets results,” Enoch said via a video posted on Twitter by Georgia Republicans.  “I’ve believed in him from the first time I worked for him during the first campaign…I love him.”

We’re gearing up for Black Voices for Trump in Atlanta!

Jermane Enoch, a business man from from Powder Springs, is voting for President @realDonaldTrump in #2020 because he knows how to get things done! #gapol #MAGA #KAG pic.twitter.com/YLCNP1GSCB

Some of the supporters, dubbed the Black Voices for Trump, traveled from elsewhere for the fundraiser. Dr. Darrell Scott, a pastor of New Spirit Revival Center in Cleveland, Ohio, and his wife Dr. Belinda Scott traveled from Ohio. They both snapped a shot outside of Air Force One Friday.

With my best half on the way to the “Black Voices for Trump” Coalition Launch in Atlanta. Georgia on Air Force One. #MAGA #KAG pic.twitter.com/nlOReINicz

Another supporter from Forsyth County encouraged voters from all backgrounds to throw their support behind the president.

Journalist Khushbu Shah shared a photo from Friday’s event of Reggie Carr and Cass Thomas, who both expressed their staunch support of Trump’s campaign hats inscribed with the words “I’m a Trumpster.”

A board member for Black Voices for Trump shared a photo on Twitter of himself and Herman Cain, a Georgia Tea party activist and longtime Trump supporter.