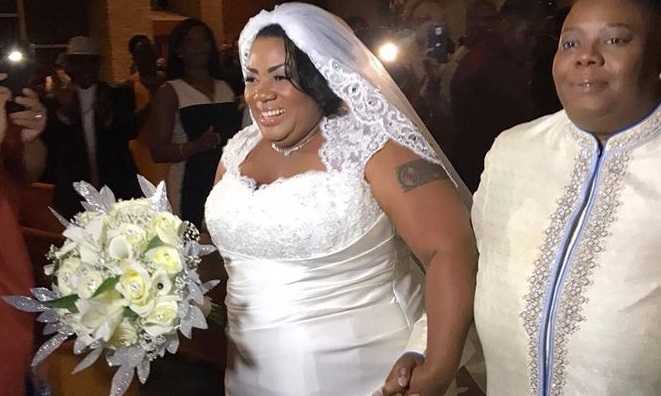 EAST ORANGE, N.J. — Two female ministers with the United Church of Christ recently “wed” each other despite being warned by the father of one of the women that doing so was unbiblical. He did not attend the ceremony.

“My father would not come here because he does not believe in same-sex marriage,” Twanna Gause told the New York Times in an article published on Friday. “He told me the devil tricked me into this, and that if we had been married in biblical times, we would have been stoned to death.”

Gause and her partner Vanessa Brown both lead Rivers of Living Water United Church of Christ, which has locations in both New Jersey and New York. Both had been in relationships with men, one being previously married and the other breaking off an engagement.

The two entered into a lesbian relationship in 2005, but didn’t want to tell their parents at first that they considered each other more than just female friends. According to Gause, when she revealed the truth to her father, he confronted her with the Scriptures.

“He slammed the Bible down on a table and said to us, ‘Did you all read this book?’” she stated. “He was furious.”

Mr. Gause, a Pentecostal pastor that also has affiliation with Center of Hope Church of God in Christ, continues to hold his ground.

“We all have a conscience,” he told the New York Times. “It is through that conscience that we hear from our Creator as to what is right and what is wrong, and if God did not want us to procreate, then why didn’t He just create billions of people with no gender at all? He must have had a reason for doing what He did.

While Gause did not attend the ceremony, his ex-wife, Cathy Dodson, did.

“It was a mistake that her mother even went to the wedding,” he said. “Had she rejected outright that kind of behavior, and become the lovable person that my daughter was in search of, perhaps Twanna would have had a different idea about that kind of thing, and not gone elsewhere to seek love.”

Dodson remarked that she didn’t think it was Gause’s place to “judge” their daughter’s choice of a partner, and that she was going to support her no matter her life choices.

“I tried to get him to come here tonight, but it was a losing battle,” she stated. “He asked me why I would even bother showing up, and I said to him, ‘All you need to remember is that Twanna is my daughter, and I love her, and I have her back no matter what she does, and that’s why I’ll be there.’”

Mr. Gause said that he doesn’t have to judge his daughter because “judgment has already been established by God.”

According to reports, the ceremony and reception, which was held at New Vision Full Gospel Baptist Church in East Orange, included representatives from the Yoruba, Jewish, Hindu, Muslim and Buddhist religions, as well some secular music selections.

Twanna Gause’s bio outlines that she has shared the stage as a singer with “Mariah Carey, Anthony Hamilton, Ann Nesby, Kim Burrell, and Karen Clark-Sheard, Earnest Pugh, B. Chase Williams and Shabach, Meitta Stancil-Farrar and Tehillah, Saturday Night Live and MTV Unplugged with Florence and the Machine and Stevie Wonder.” She also identifies herself as having a prophetic call on her life.

As previously reported, the United Church of Christ has been vocal for years about its homosexual advocacy, sponsoring Ohio’s “Gay Games” in 2014, and filing a legal challenge against North Carolina’s same-sex “marriage” ban that same year, asserting that it violates the free exercise of religion among clergy.

However, those within biblical orthodoxy note that homosexuality is a violation of God’s law, as cited in both the Old and New Testaments. Romans 1, which addresses homosexual behavior, notes that lesbianism is “against nature” and refers to homosexuality as a deviation from God’s design for the “natural use of the woman.”

“For this cause God gave them up unto vile affections, for even their women did change the natural use into that which is against nature,” verse 26 reads. “And likewise also the men, leaving the natural use of the woman, burned in their lust one toward another; men with men working that which is unseemly, and receiving in themselves that recompence of their error which was meet.”