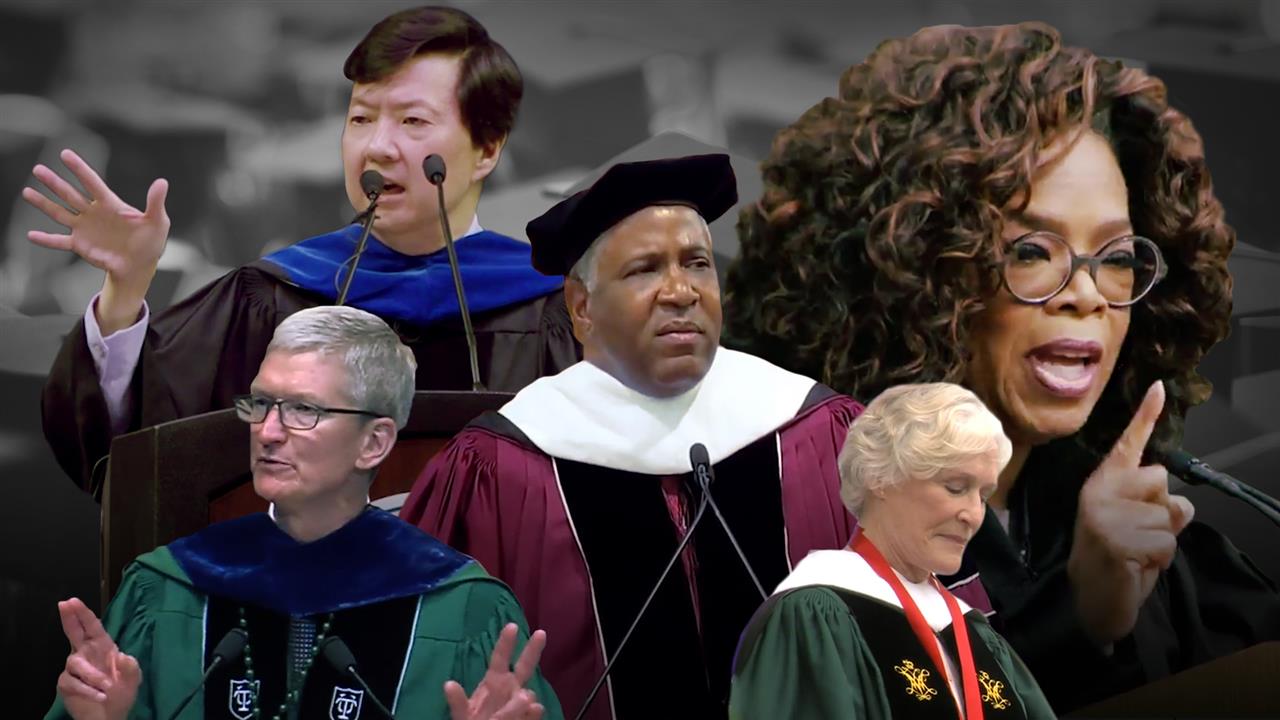 The best commencment moments for the Class of 2019; thoughts from Oprah Winfrey, Mike Pence, Ken Jeong, Robert F. Smith and other speakers

Vice President Mike Pence, Taylor University: “We live in a time when religious belief is under assault. We’ve seen unspeakable acts of violence against religious communities. Synagogues in Pennsylvania and California. Mosques in...
by Joy Smith May 25, 2019 442 Views

Vice President Mike Pence, Taylor University: “We live in a time when religious belief is under assault. We’ve seen unspeakable acts of violence against religious communities. Synagogues in Pennsylvania and California. Mosques in New Zealand. Churches in Sri Lanka. And three historically black churches burned to the ground in Louisiana. And on a much lesser scale, but more prevalent, we see a change in our culture as well. You know, throughout most of American history, it’s been pretty easy to call yourself a Christian. … Lately, it’s become acceptable, even fashionable, to malign traditional Christian beliefs. So as you prepare to leave this place and build your life on the Christ-centered, world-engaging foundation poured here at Taylor University, be prepared to stand up. … Go show the world every day that we can love God and love our neighbor at the same time. Our nation and our world needs it.”

Leslie Odom Jr., Tony and Grammy Award winner, Carnegie Mellon University: “I (was) lucky enough to be a (member) of the original company of ‘Hamilton.’ … There were, of course, many contributing factors large and small that got me there. (But) much of your ultimate success lies in just how well your actions line up behind your intentions. … I am talking about getting to know yourself and naming the things you want. I am talking about taking the time to get to know why exactly you want those things. You want influence. Well, what do you plan to do with it once you get it? Your notoriety. Your following. What do you plan to do with your money once you get it?”

Donna Strickland, Nobel Prize winner, University of Rochester: “Grab every opportunity and make the most of it. After my Ph.D., I took a three-year postdoctoral position. … Next thing you know, it is only three months until I would be unemployed and I knew I wanted a laser science job. … The job sounded good, but it was in California. … I had to decide between living with my new husband and being unemployed, or having an interesting science job and living by myself. I chose the career path. You always have to make choices. My husband and I kept looking for jobs so we could be together, and we were only apart for one year after we were married.” 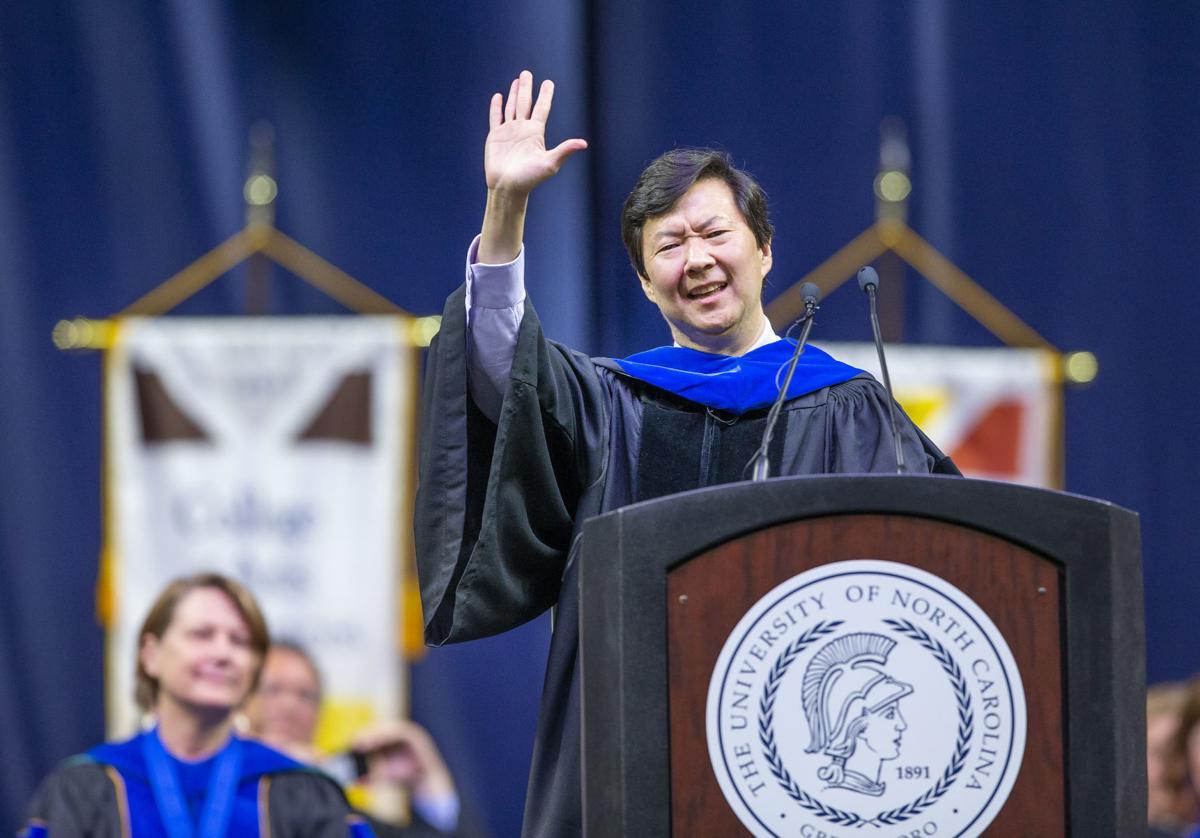 Purdue University President Mitch Daniels: “At other places, but I’m happy to say not yet at Purdue, students have demanded to be kept ‘safe’ from speech, that is, mere words, that challenge or discomfit them. … I don’t pretend to know what’s causing the phenomenon. I do know that in the world you’re about to enter, emotional strength, in the form people are now terming ‘resilience’ or ‘grit,’ will be essential for you to realize the enormous potential we see in you. … Don’t misunderstand this, but I wish for you many … tough moments. You can easily avoid them; just lead a safely inconsequential life: Run no risks, confront no injustice, accept no roles of leadership. But that’s not the path we expect you to choose.”

Supreme Court Justice Sonia Sotomayor, Manhattan College: “When I was a child, my family was poor. No lawyer or judges lived in my neighborhood. I knew nothing about the Supreme Court. … You cannot dream of becoming something you do not know about. You have to learn to dream big. Education exposes you to what the world has to offer, to the possibilities open to you.”

Rep. Antonio Delgado, D-N.Y., Colgate University: “Life has taught me that to dream big, you need love. It was my love of hip-hop culture and the pursuit of justice that pushed me to become the rapper AD, the Voice; it didn’t matter that I left family and friends scratching their heads, wondering why a Rhodes scholar with a Harvard Law degree and mountains of student debt would move to L.A. to become a struggling hip-hop artist. For five years, I toiled away, sleeping on air mattresses … and taking on odd-end jobs, from being a parking lot attendant to an apartment janitor, in order to pursue my passion and rap about things like the perils of inequality, violence and hate. Was I successful? Certainly not monetarily speaking, I’ll tell you that. But I found a lot of meaning in the struggle, obtained a better sense of self and grew stronger in my truth, wherever it would lead.”

Ken Jeong, University of North Carolina at Greensboro: “A lot of people think I’m the model minority. I’m a doctor. I’m an actor. I’m an Instagram model. … What is your act II? Everyone here has a different timeline. Everyone here has a unique story. Figure out what your act II is, and embrace the change, embrace the twists and the unexpected turns. … They say everything happens for a reason. I don’t know if that’s true, but I do know everything happens, and it’s up to you to maximize the reality of your situation.”

Coast Guard graduates at the commencement in New London, Connecticut, on May 22, 2019. (Photo: Jessica Hill/AP)

Retired Lt. Gen. Michelle Johnson, York College: “Higher education changed the trajectory of my life … in my role as the (Air Force) Academy superintendent. … When my mandatory Air Force retirement date arrived in 2017 … the National Basketball Association was looking for an experienced leader to formalize processes in scouting, training and evaluating referees. … I was surprised to be approached by the NBA. … And it illustrates a point I’d like to share with you, that life doesn’t always follow a straight line. There are ups and downs, detours and serendipitous opportunities that more resemble a ‘Mario Kart’ race than a planned road. … Art Buchwald said … these may not be the best of times or the worst of times, but this is the only time we have. Let’s make the most of it!”

Frank Beamer, football coach, Virginia Tech: “The days of hanging out at Top of the Stairs, Big Al’s and Sharkey’s on your parents’ dime are over. It is on you now. Welcome to the real world. … Each of you is going to face adversity, it’s going to happen. Prepare each day for it. More importantly, prepare each day for how you’ll react to it.”

Kyle Korver, NBA veteran, Creighton University: “The 51st pick, to the New Jersey Nets (in 2003). I found out shortly afterward that I had been traded to Philly. I’m not sure if traded is the right word. I was more or less sold for an undisclosed amount of money. I later found out (the Nets) used that money to pay for the entry fee for their summer league team, and with the leftover money, they bought a copy machine. … But it’s OK. Because a couple of years ago, that copy machine broke. And I’m still playing.” 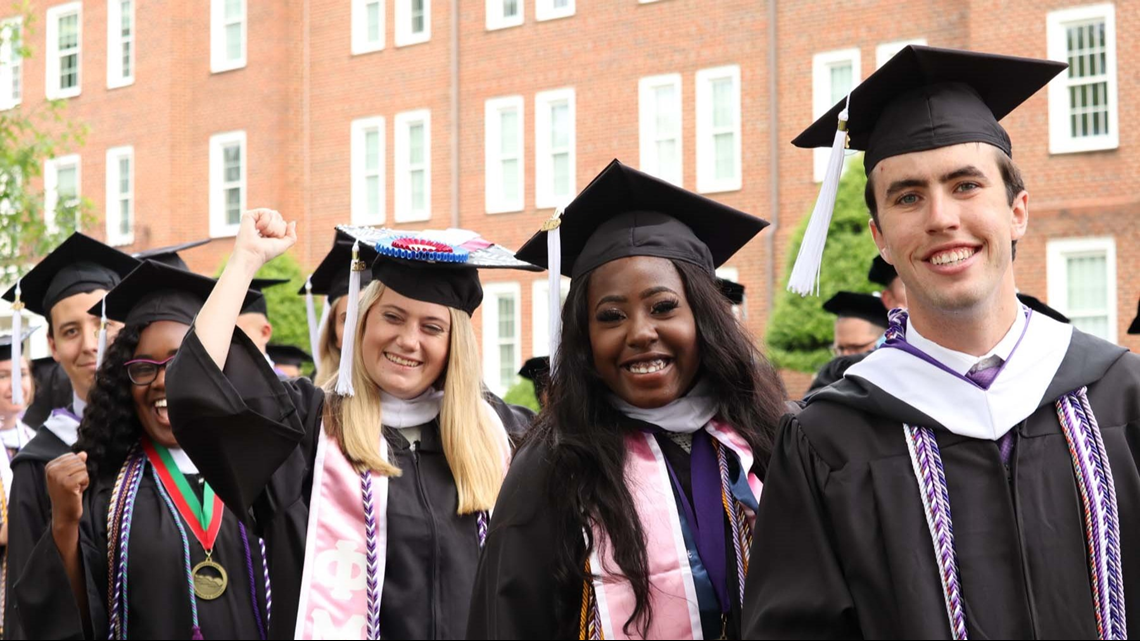 Glenn Close, Golden Globe winner, William & Mary: “When I graduated, 45 years ago, I was the first woman in my family to earn a college degree. … I had been raised to be a total believer, to not question. But for me, coming into this ideas-rich community … it was vital that I learn how to question. You have a much harder time of it now than I ever had. … I didn’t have the added, enormous pressure of social media against which to develop as an adult. I think my mind would have exploded. I didn’t have that insistent, seductive noise in my pocket and at my fingertips. … What each of you have, and what you must believe in from this day forward, is your inherent uniqueness. … No one looks out onto the world through your eyes. Your perspective is unique. It’s important and it counts.”

Robert F. Smith, investor, Morehouse College: “On behalf of the eight generations of my family who have been in this country, we’re going to put a little fuel in your bus. … This is the challenge to you, alumni. This is my class — 2019. And my family is making a grant to eliminate their student loans. Now, I know my class will make sure they pay this forward. And I want my class to look at these … beautiful Morehouse brothers, and let’s make sure every class has the same opportunity going forward.”

Meek Mill joins the competition between Dj Mustard and Fabulous!

‘The Spice Girls’ reunited but fans left the concert with bad memories!