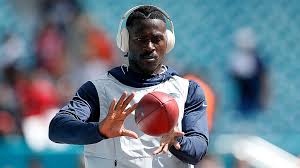 WELP! Antonio Brown RELEASED By The Patriots Amid Rape Allegations

Welp. The Patriots just released embattled NFL player Antonio Brown less than two weeks after signing him. The firing comes amid rape allegations made against the wide receiver.

“We appreciate the hard work of many people over the past 11 days, but we feel that it is best to move in a different direction at this time,” the team said in a statement.

AB hopped on Twitter to thank the Patriots organization right before news dropped that he was being released:

As you know, the NFL star was hit with a lawsuit from his former physical service trainer, Britney Taylor. She filed a civil complaint in the US District Court in Miami on September 10th, accusing him of two sexual assault incidents in 2017 and rape in 2018. The lawsuit was filed three days after AB forced a trade from the Oakland Raiders to the New England Patriots. It was reported AB rejected to sign a $2 million settlement with Britney before she filed the lawsuit.

Yesterday, NIKE cut ties with AB and he no longer has his shoe deal with the company. A NIKE spokesperson told the publication, “Antonio Brown is not a Nike athlete.” They pulled his “Business Is Boomin” sneakers from their website.

He also lost a deal with Xenith – a football helmet manufacturer. They ties with AB days after the lawsuit hit the headlines. He was supposed to wear the Xenith Shadow helmet this season after losing two appeals with the NFL to allow him to wear a helmet that was no longer certified by the league.

A SUV Just Drove Into A Mall In Chicago!

The Patriots Have Release Wide Receiver Antonio Brown Amidst Allegations