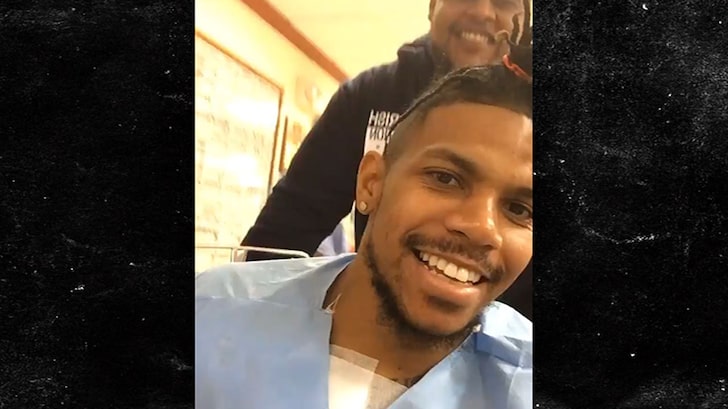 LUCKY TO BE ALIVE Terrelle Pryor was just wheeled out of the Intensive Care Unit — SMILING — with a bandage over the wound where he was stabbed in his...
by Raquel Jayson December 3, 2019 218 Views

LUCKY TO BE ALIVE

Terrelle Pryor was just wheeled out of the Intensive Care Unit — SMILING — with a bandage over the wound where he was stabbed in his chest … and it’s all on video.

“Thanks for all the support,” the NFL player said on his way out of ICU … “I’mma be aite.”

Pryor notes that he “had to be coded twice” — which is usually hospital slang for an emergency effort to resuscitate someone having a life-threatening medical episode.

You can see a bandage on Pryor’s right chest area.

As we previously reported, Pryor underwent emergency surgery on Nov. 30 after he was stabbed in the chest in a domestic dispute with his girlfriend, Shalaya Briston.

Seems Pryor got along with the nurses and staff in the ICU — writing, “Left trauma ICU for the first time. Had to say by to my girls.”

In the footage, Pryor invites the staff to come visit him “upstairs” — which we assume means he’s being moved to a different part of the hospital while he continues to recover.

Once Pryor is healthy enough to leave the hospital, cops tell TMZ Sports he’ll have to surrender to police to be booked for misdemeanor assault for his alleged role in the incident with his GF.

As for Briston, she’s been charged with aggravated assault and attempted homicide, and is currently behind bars.

This Philly Mother Bought A Dog Leash, Hanged Her 2 Kids Then Had Sex With Her Dog