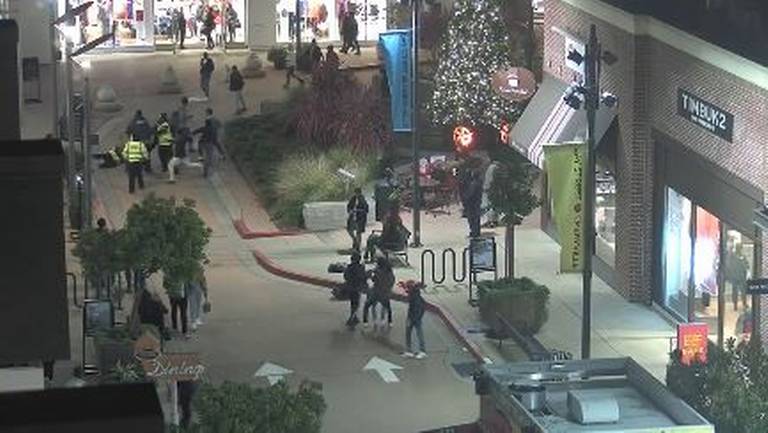 An off-duty California Highway Patrol officer wound up being briefly choked unconscious in a Black Friday brawl at a shopping mall near San Francisco as he went to the aid of...
by Zach Freeman December 3, 2019 230 Views

An off-duty California Highway Patrol officer wound up being briefly choked unconscious in a Black Friday brawl at a shopping mall near San Francisco as he went to the aid of a shopper, KRON reported.

Security video released by the Emeryville Police Department of the 8 p.m. incident at the Bay Street Mall shows a woman approach the teens, who violently push and shove her.

The woman had accused the teens of earlier stealing her phone and demanded its return, KNTV reported.

In the video, the off-duty officer, wearing civilian clothes, approaches and talks to the woman, then gestures toward the teens. Yanking off his hat and sweatshirt, at least one teen charges the man and a brawl erupts.

Some of the teens appear to try to intervene while others join in as the chaotic fight moves down a pedestrian walkway, into landscaping and then back onto the walkway, the video shows. Several teens can be seen beating the off-duty officer, sometimes as he’s on the ground.

“He was punched. He was kicked. He was taken to the ground. He was choked. He lost consciousness for a minute, came back, was able to defend himself,” said detective Jaime Pardo, KPIX reported.

The officer recovered and sprayed the teens with pepper spray, KGO reported.

Security guards in bright yellow safety vests converge on the scene and break up the fight after a few minutes, the video shows.

Emeryville police arrested a 14-year-old and 16-year-old on suspicion of assault, KPIX reported. Police are seeking six other teens.

The off-duty officer drove himself to a hospital to be treated for his injuries, KGO reported.

Emeryville lies between Oakland and Berkeley near the Bay Bridge into San Francisco.

Teens attacked and choked an off-duty California Highway Patrol officer on Friday in Emeryville near San Francisco after he went to the aid of a woman who had accused them of stealing her phone, police say. SCREENGRAB FROM EMERYVILLE POLICE DEPARTMENT VIDEO