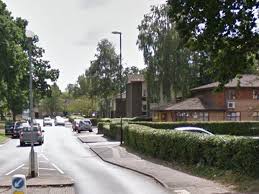 The victim was approached by an unknown man in the car park of St Bernadette’s Church, in Tilgate Way, about 5.25pm on Thursday (July 11), said Sussex Police.

A spokesman said: “The suspect then touched her over her clothing, before making off in the direction of Tilgate Parade.”

He was described as white, in his mid-20s, about 6’, of slim build, with stubble, and was wearing a red long-sleeved hoody – possibly with black writing on it – with the hood pulled tight around his face at the time of the offence.

He also wore round shaped sunglasses with a gold mirror finish, and possibly stone-coloured combat shorts with knee pockets.

Vivica A. Fox Says Farrah Abraham Wanted to ‘Fight’ her on WWHL!

Pastor is arrested days after confessing a dark secret to his congregation!