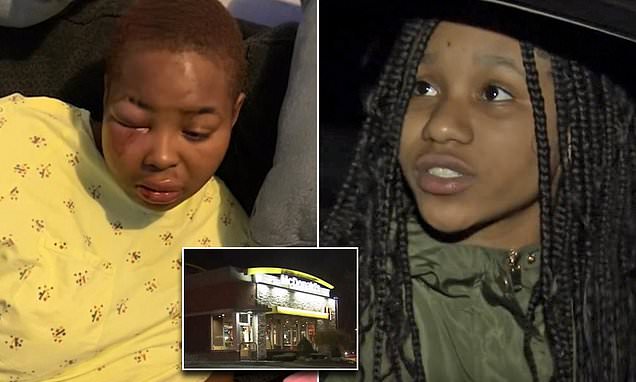 A Philadelphia McDonald’s worker was brutally attacked and beaten unconscious by a group of teen boys after she didn’t give them free food, according to her family. Khadijah Lovett...
by Raquel Jayson November 22, 2019 300 Views

A Philadelphia McDonald’s worker was brutally attacked and beaten unconscious by a group of teen boys after she didn’t give them free food, according to her family.

Khadijah Lovett told NBC10 her 17-year-old cousin Charm Sullivan was beaten by at least four boys Wednesday night inside the McDonald’s restaurant on Broad Street and Hunting Park where she was working behind the counter.

“She’s hurt,” Lovett said. “The only thing she keeps saying is she doesn’t know. Why her. Why her?”

Lovett told NBC10 the ordeal began when Sullivan denied giving a group of teens free food. The teen boys then attacked her and followed her when she tried to escape and go to the bathroom, according to Lovett.

The beating spilled outside where Sullivan was later found unconscious between two cars in the restaurant’s parking lot, her family told NBC10.

“They assaulted her several times,” Lovett said. “They hit her with a brick in front of McDonald’s.”

Lovett shared photos of her cousin whose right eye and lips were bruised and swollen.

NBC10 visited the McDonald’s Thursday night. A manager at the restaurant refused to talk to us.

Lovett told NBC10 her cousin will never go back again to work at the McDonald’s. Philadelphia police, meanwhile, are searching for the teens involved in the attack. They have not yet released descriptions of the attackers.