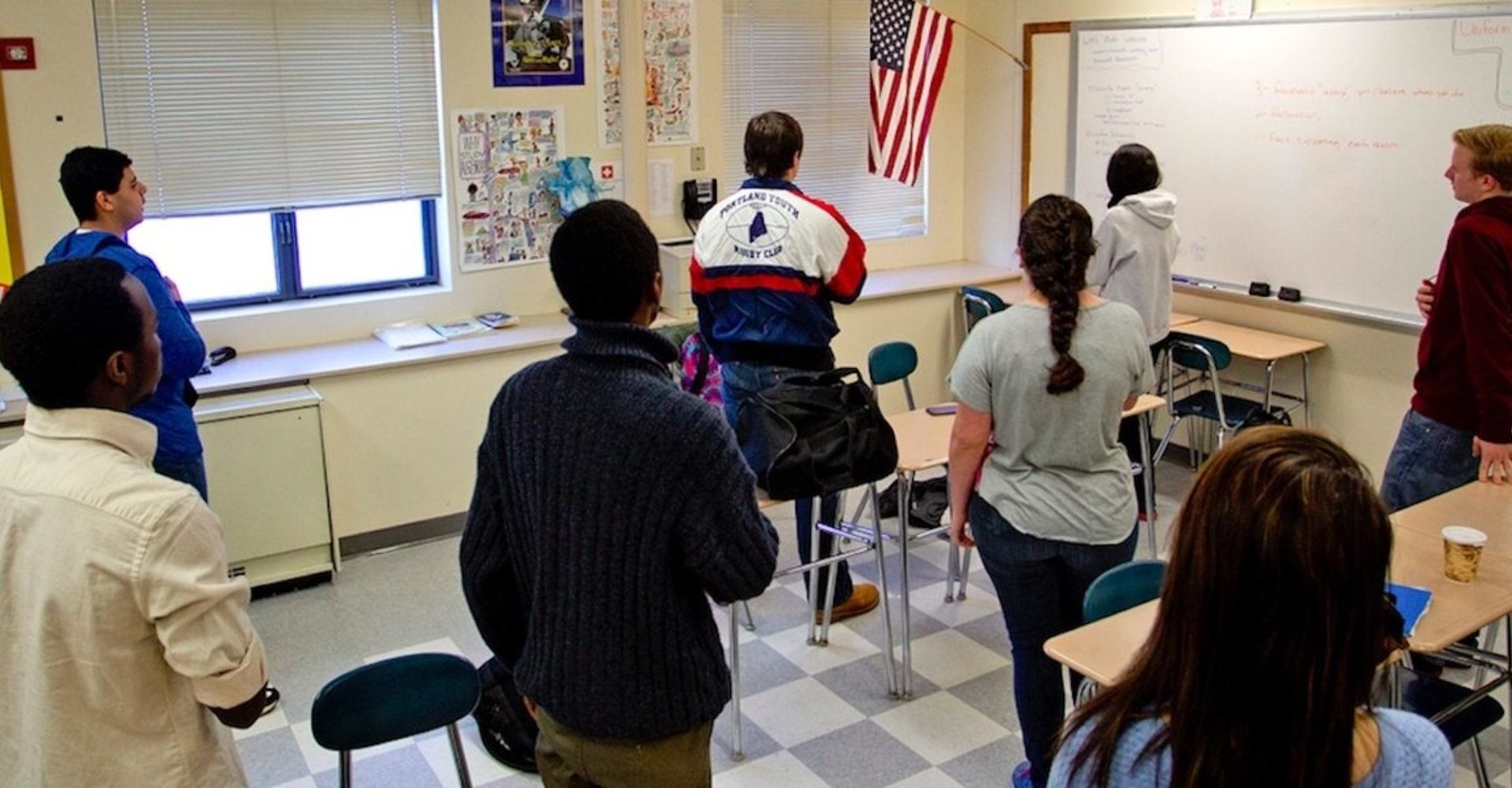 A Florida educator is out of the classroom after admonishing students in the Jacksonville-area school for exercising their right not to stand for the Pledge of Allegiance and national...
by Joy Smith August 19, 2019 509 Views

A Florida educator is out of the classroom after admonishing students in the Jacksonville-area school for exercising their right not to stand for the Pledge of Allegiance and national anthem.

In a memo scribbled on his whiteboard, Goodman wrote: “THINK: We had about a half million Americans die in our Civil War, which was largely to get rid of slavery. There are no longer separate water fountains and bathrooms in Jacksonville for ‘white’ and ‘colored,’ as Mr. Goodman remembers from the 1960′s. We had an amendment to the U.S. Constitution allowing women the right to vote.”

The teacher went on to mention the U.S. electing its first Black president and noted that the district’s own superintendent and school principal are also Black.

“MY POINT? You are all extremely lucky to be living in the U.S.A,” he continued. “If you refuse to stand during the Pledge of Allegiance or our National Anthem (AS SOME PAMPERED ARROGANT CELEBRITIES AND ATHLETES TEND TO DO), are you revealing maturity and wisdom? Actually, you are displaying the opposite. -Mr. G.”

Goodman’s message hit a nerve with many social media users. Kandice Clark, whose friend has a daughter in Clark’s class, deemed the teacher’s note as “foolishness” and inappropriate for school.

“We’re LUCKY to have basic rights and to be treated humane?” Ms. Clark opined. Why should our kids be met with this type of attitude at school? I can’t wait until this teacher is held responsible for their reckless banter, cause it’s coming! I hope none of the students stand up for the Pledge of Allegiance in protest of the teacher 😐”

Others commented on the post criticizing Goodman, some arguing that the teacher’s message seemed to be aimed at certain groups of students. “He might as well have written dear black people and females …,” said one user. “As a teacher you don’t make the learning environment uncomfortable like this, and you don’t go on a power trip telling people what they ought to do when they have a legal right not to do it.”

Another commenter agreed, writing: “This message is clearly a message for black students for the most part and then he took a little jab at females. We are lucky? No you are lucky they removed you from the classroom before you had the right one sir. Goodbye!”

“His message should’ve applied to ALL,” another user added. “He singled out his message to black kids. So, just the black kids should be extremely lucky to be here?”

In a statement, a Duval County Public School’s spokesperson said the  district is aware of the incident and that Goodman may be in violation of both state law and school board policy. Media relations official Maureen Ricks explained that under Florida statute 1003.44 and board policy, students have the right not to stand and recite the pledge.

School code “permits students to be excused from reciting the Pledge of Allegiance, to include standing, if the student’s parent or legal guardian files a written request with the school principal,” Ricks told Atlanta Black Star.  “The ability for students to be excused is also included in the Code of Student Conduct.”

The controversy comes a month after Virginia Senate guard was forced to apologize after physically forcing an African-American teen to his feet for the pledge. The young man had remained seated in protest.

Then, on Wednesday, a Montana man pleaded not guilty to choke-slamming and fracturing the skull of a 13-year-old boy who cursed him and refused to take off his hat during the national anthem.

As for Goodman, district officials said he’s been removed from his classroom pending an investigation by the Office of Professional Standards.

Watch more in the video below.