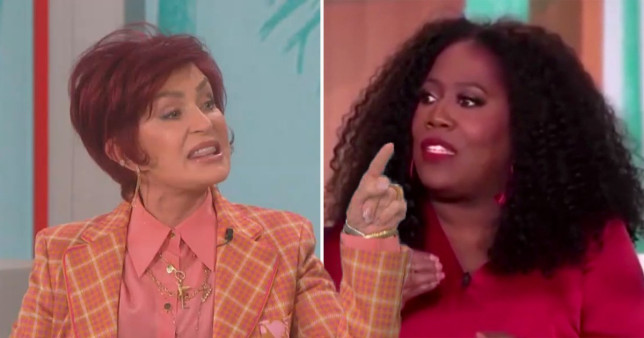 Sheryl Underwood is sharing how she felt after having a heated conversation with Sharon Osbourne about racism on The Talk this week.

The two co-hosts got emotional while Osbourne explained why she was defending friend Piers Morgan and his decision to quit Good Morning Britain after he was called out for his controversial comments on Meghan Markle. The conversation drew much criticism for the way Osbourne was talking back to Underwood, as her co-stars attempted to explain why Morgan’s comment regarding Markle may have been off-putting to many people.

. @piersmorgan I am with you. I stand by you. People forget that you’re paid for your opinion and that you’re just speaking your truth.

“I got calls from all over the world from people that I was wondering, ‘How did you find me? How do you know me?’ I was getting prayers, I was getting love,” Underwood said on Friday’s The Steve Harvey Morning Show. “And I want people to know this, I believe that God was telling me, ‘I have a plan for you. I am about to pour down a blessing upon you. I just need to know, are you ready because you will face this again?'”

“I just wanted to be a better example for people that are working just a regular old job, that had to compose themselves,” she continued. “We are the only race of people that carry the race wherever we go and we’re responsible for that. And I want to thank everybody all over the world in social media, everybody in radio, television, news, everywhere, everybody that reached out, what power you had to make me understand you have matured Sheryl Underwood. You have matured. Because I could have messed it up, couldn’t i? I could have messed it up.”

Steve Harvey, on his end, stated, “First of all, let me say all of us on this show were beyond proud of the way you handled the situation. We thought you handled it masterfully. Just really. really well and you told the truth.”

“I did not appreciate Sharon… the way she came and talked about it and, ‘You don’t need to be crying over that. I need to be the one crying,'” he said, noting on Osbourne’s comments to Underwood. “The problem with solving racism is when you don’t know what you’re doing is racist. If she were not Black, we’re not even having this damn conversation about the baby, the royal family or nothing else.”

On her own podcast, Underwood also said that she considers Osbourne a “friend” and she did have to restrain herself from taking things further.

“I really didn’t realize it was jumping off. I thought we were having a conversation like we normally do. But then I got a feeling that, wait a minute, this ain’t what it usually is,” she explained. “I also got another feeling of, OK, Sheryl, this is time for you to step up into the leadership position… this is time for you to show what you’re made of, and in a personal way. No matter what somebody says about you, I can show you something better than I can tell you.”

Following the debate, a source told ET that the co-hosts met after their show on Wednesday in a closed-door meeting to discuss what happened between Underwood and Osbourne on-air. But, the source says, nothing was resolved.

At the top of Thursday’s The Talk, Amanda Kloots addressed the debate with Osbourne, Underwood and Elaine Welteroth sitting by.

“Hello, everyone. Welcome to The Talk,” she said. “We are a TV family here. Sometimes we argue like we did yesterday and sometimes we laugh but we are back together again today and we are ready to start today’s show. So, let’s get into these topics.”

Osbourne, herself, later took to social media to apologize and further explain her point of view.

“After some reflection, after sitting with your comments and sitting with my heart I would like to address the discussion on The Talk this past Wednesday. I have always been embraced with so much love and support from the Black community and I have deep respect and love for the Black community. To anyone of color that I offended and/or to anyone that feels confused or let down by what I said, I am truly sorry,” she tweeted in part. “I panicked, felt blindsided, got defensive and allowed my fear and horror of being accused of being racist take over. There are very few things that hurt my heart more than racism so to feel associated with that spun me fast! I am not perfect, I am still learning like the rest of us and will continue to learn, listen and do better.”