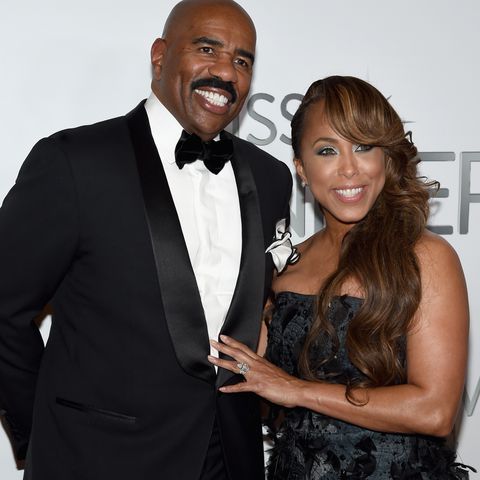 Steve Harvey’s talk show was canceled on NBC in May.
Now, Steve is enjoying a vacation with his stepdaughter, Lori Harvey, and wife, Marjorie.
While on vacation, he posted an Instagram teasing the big event that he’ll be hosting this October.
It’s been just over a month since Steve Harvey’s talk show wrapped up and already the Family Feud co-host is talking about what’s next.

On Instagram, Steve shared last Saturday that even though he’s currently on a summer vacation with his wife, Marjorie Harvey, and stepdaughter, Lori, he can’t stop thinking about what he has planned for the fall.

“@sandandsoulfestival is around the corner AND @marjorie_harvey’s big 55th is opening night! What should I do to set it out right for her?! And who’s gonna come?!” Steve wrote.

I’m on vacation right now, but I keep thinking about that @sandandsoulfestival is around the corner AND @marjorie_harvey’s big 55th is opening night! What should I do to set it out right for her?! And who’s gonna come?!

This year marks the third time Steve has hosted his Sand and Soul Festival in Cancun, Mexico. The four-day festival, which runs from October 10-14, will feature all sorts of events, including a comedy show, foam party, Q&A with the Harveys, cigar and cognac mixer, and much more. Plus, because October 10 happens to be Marjorie’s birthday, it sounds like a few extra surprises will be in store. But before any of that happens, Steve will continue to enjoy precious family time. As his Instagrams have been showing, Steve appears to be living it up in Albania, Greece, and various parts of Italy.

Albania across the ocean is Greece…. like Columbus Ga & PHEONIX city AL😂

Last week, Lori made headlines when she was spotted with Sean ” Diddy” Combs in matching outfits while out in New York City. This sparked rumors that Steve’s stepdaughter was dating the rapper. Lori used to be romantically linked to Justin, P. Diddy’s son.

No one in the Harvey family has confirmed or denied any of the hearsay, though. Instead of paying attention to the noise, Steve, Marjorie, and Lori are just out there living their best lives in paradise, as they should be.

He Murdered Her Right After She Told Him She Was Pregnant With His Child And Refused To Have An Abortion!