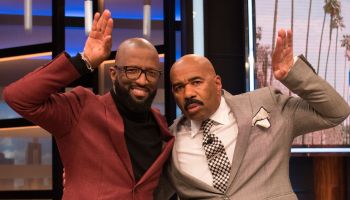 “With y’all righteous self…you can’t do nothing when you’re a christian” says Steve Harvey! Many celebs are speaking out on behalf of Kirk Franklin. It seems to be a public divide on whether Kirk was right or wrong. It seems the focus is on his choice of words. I’ve read in many places where if you aren’t a parent of grown kids you may never relate. Then there are some that are saying there is no excuse for foul language.

What are your thoughts? Do you feel Kirk was wrong or can you relate to being a parent of grown children.

Grammy-winning gospel performer Kirk Franklin is apologizing after his adult son posted audio on social media of the famed songwriter and choir director hurling profanity during an argument.Franklin, who is also well known for hosting BET’s reality singing competition “Sunday Best,” posted a video apology over the weekend on his verified Twitter account.“Many of you know that I have an older son named Kerrion Franklin, in May he’ll be 33,” the 51-year-old musician said. “For many years we have had a toxic relationship with him as a family.

“The younger Franklin posted video of audio of a phone call with his father on Instagram, writing “This is why I’m done. No father should speak to their children like this.”Content by ArhausCreate your outdoor oasis, inspired by the worldSince 1986, Arhaus has been making the highest-quality indoor and outdoor furniture with an eye toward timeless, globally inspired design and unique statement pieces for discerningThe elder Franklin can be heard using expletives and insulting his son before appearing to hang up.Kirk Franklin said in his video apology that he and his family, including his son, have sought counseling “to try to rectify this private family matter.”

“Recently my son and I had an argument that he chose to record,” Franklin said. “I felt extremely disrespected in that conversation and I lost my temper and I said words that are not appropriate and I am sincerely sorry to all of you. I sincerely apologize. “According to Franklin, during that conversation he got their family therapist on the phone to try and help with the situation, though he says his son did not play that part of the conversation.”I’m not perfect,” Franklin said. “I’m human and I’m gonna make mistakes and I’m trying to get it right. Please keep me and your family in your prayers.”