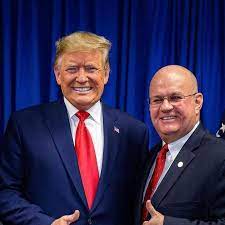 “I really don’t have words to say about the imprint that he left on the political landscape in South Carolina,” Harvell said. “He had the kind of personality that enabled him to get done what others couldn’t do.

Stutts and his wife were rushed to the hospital Aug. 1 after his oxygen levels dropped. “The COVID has created double pneumonia in my lungs,” he said in a Facebook post at the time.

He further said in his post that as a proponent for “freedom and liberty,” no one should be forced to wear a mask and get vaccinated.

Stutts’ health continued to deteriorate as the days went by. Late last week, he announced on Facebook that he was going on a ventilator.

A former chaplain for the Marines, Stutts became the executive committeeman of the Greenville County Republican Party during a July 22 meeting. Before that, he was most well-known as the leader of the Greenville Tea Party.

In June, when U.S. Vice President Kamala Harris visited Greenville to encourage more vaccination in the state, Stutts stood outside with a group of more than 100 people and protested amid scores of waving American flags and posters.

They were protesting against vaccine and mask requirements.

“People should be free to get the vaccines they want. Free not to get it. But what’s happening now is that there’s a discrimination starting to take place,” he told The Greenville News.

But it’s the quest for Greenville County’s GOP leadership that truly illustrates his political career.

Stutts ran a bitter race against ex-chair Nate Leupp for the county chair position in 2019, where he “expected going up against the establishment was going to be tough.”

“I’m not hanging my head,” he said. “We gave a solid showing.”Your stories live here.Fuel your hometown passion and plug into the stories that define it.

Two years later, he ran with Jeff Davis and Walter Horin in a slate called the “MAGA slate” for the position of executive committeeman. MAGA is the acronym for former President Donald Trump’s campaign slogan — Make America Great Again.

Stutts said in several interviews and events that he wanted to “drain the swamp” in Columbia and “remove the RINOs” from the GOP. RINOs is short for Republican In Name Only, a term he and others have used to describe “politicians who identify as Republicans but legislate like a Democrat.”