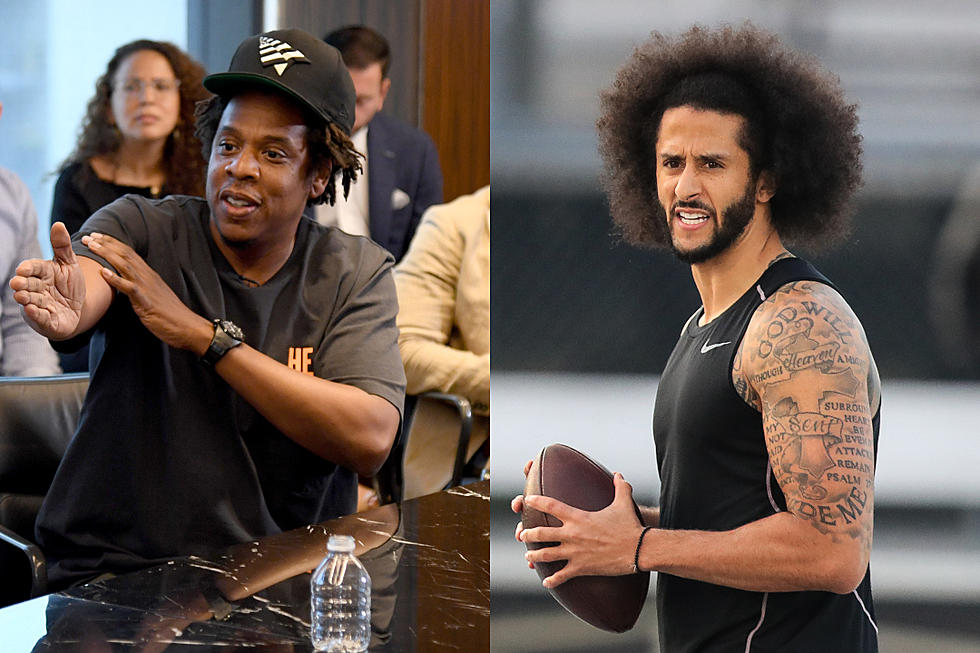 Colin Kaepernick’s unanticipated decision to change Saturday’s planned NFL workout let down one of his biggest supporters: Jay-Z. According to a source, the rapper-turned-businessman is “disappointed with Colin’s actions and believes...
by Zach Freeman November 18, 2019 222 Views

According to a source, the rapper-turned-businessman is “disappointed with Colin’s actions and believes he turned a legitimate workout into a publicity stunt.”

Kaepernick requested to shoot a Nike ad as a part of Saturday’s workout, featuring the quarterback and mentioning all the NFL teams present at the workout. The NFL agreed, but Kaepernick informed the league of his decision to change the location of the workout on Saturday at 2:30 p.m., moving the event from the Falcons’ practice facility to Charles R. Drew High School in Riverdale, Ga.

The location change dampened attendance, but a few NFL scouts reportedly followed Kaepernick to the new workout location. Hue Jackson, who was selected to lead the original NFL workout, backed out and returned to the airport.

The NFL workout, originally scheduled for 3 p.m., was designed to showcase Kapernick and provide the exiled quarterback an opportunity to display his football readiness and desire to return to the NFL. Kaepernick threw to a host of receivers and proved that he still has the talent to play.

“From the outset, Mr. Kaepernick requested a legitimate process and from the outset the NFL league office has not provided one,” his agent, Jeff Nalley, and attorney, Ben Meiselas, said in a statement. “Most recently, the NFL has demanded that as a precondition to the workout, Mr. Kaepernick sign an unusual liability waiver that addresses employment-related issues and rejected the standard liability waiver from physical injury proposed by Mr. Kaepernick’s representatives.”

Jay-Z has been vocal in support of Kaepernick, who has gone unsigned since the end of the 2016 NFL season. That support was called into question before the start of the NFL season, when the NFL and Jay-Z formed a partnership that allows him to help manage entertainment ventures, including the Super Bowl halftime show, and help manage the league’s community activism efforts.

In a news conference to announce the deal, Jay-Z said, “I think we’ve moved past kneeling. I think it’s time to go on to actionable items,“ sparking widespread backlash. But reports surfaced this week that Jay-Z had been working behind the scenes to help influence the NFL to set up Saturday’s workout.

Kaepernick has not played in the NFL since Jan. 1, 2017. He opted out of his contract with the 49ers in March 2017 and has not tried out for an NFL team since becoming a free agent.

“I’ve been in shape and ready for this for 3 years, can’t wait to see the head coaches and GMs on Saturday,” Kaepernick tweeted about the workout on Tuesday.

Why Has Chick-Fil-A Cut Their Support For Salvation Army