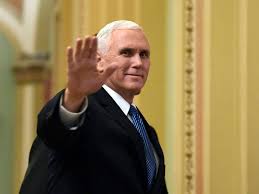 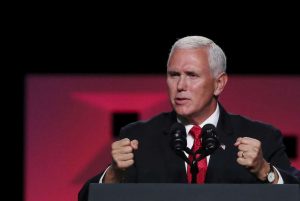 “The meeting that took place was direct and honest, provocative and productive,” Pence said. “It resulted in a bold first step where North Korea’s leader committed to the complete denuclearization of the Korean Peninsula.”

Many of the Southern Baptists listening to the Republican leader during their big denominational meeting in Dallas responded to Pence’s update on Tuesday’s summit in Singapore with applause and cheers.

They rose to their feet when Pence spoke of Trump securing a commitment from North Korea on recovering and repatriating the remains of those who fought in the Korean War.

“We are finally going to bring our boys home,” Pence said.

Pence’s nearly 40-minute speech to the country’s biggest evangelical church group covered a wide range of topics, including praise for several changes Trump has made since he took office. He lauded the president’s anti-abortion efforts and the move of the U.S. embassy to Jerusalem.

The vice president is often admired by evangelicals for his Christian faith and his ability to influence President Donald Trump on policies that resonate with conservative Christians.

Soon after he walked on stage, the vice president reiterated a sentiment he often shares, explaining to the thousands of Southern Baptists in the convention hall that he is a Christian first, a conservative second and a Republican third.

Not all happy with Pence’s speech

However, the vice president’s speech itself did not sit well with everyone in the convention hall and those watching online. Some took to social media to express their dismay of the address, calling it partisan and a stump speech.

I know Mike Pence is a Christian and our Vice President…But I want to personally apologize to those who are offended by the SBC’s decision to bring him in. I have spoken and heard from MANY young SBC leaders that desire to chart a different path moving forward.

I know the SBC has welcomed politicians on occasion going back 45 years, but has there ever been a full-blown campaign speech like this one? #SBC18 #SBCAM18

“I know that sent a terribly mixed signal. We are grateful for civic leaders who want to speak to our Convention — but make no mistake about it, our identity is in the gospel and our unity is in the great commission,” Greear said. “Commissioned missionaries, not political platforms, are what we do.”

Those reactions were in keeping with earlier efforts by some to prevent Pence from addressing the convention and to stop public officials from speaking at future meetings.

They raised concerns about sending the wrong message that Southern Baptists are aligned with the Republican party as well as worries that it could alienate minorities and those who take issue with the Trump Administration.

A Tuesday morning vote to substitute Pence’s speech for a time of prayer failed to get enough support after Grant Ethridge, chairman of the Committee on Order of Business, made a biblical case for showing hospitality to people in positions of authority.

“I believe we respect the position regardless of whether or not you supported or voted for the person,” Ethridge said.

Before the vice president took the stage Wednesday, those in the room rose to their feet for several minutes of pre-scheduled worship.

Pence walked on stage to loud applause after an introduction from current Southern Baptist Convention President Steve Gaines, who is a pastor from Memphis. He remarked on the support Pence offered the victims of last year’s mass shooting at First Baptist Church of Sutherland Springs, which is a member of the network of churches.

“I am so grateful to have a vice president who not only loves people, but also loves the lord, Jesus Christ.”

Pence recounted visiting with the victims of the Texas shooting and praised Pastor Frank Pomeroy, who leads the Sutherland Springs church. He was moved by their strong faith in the face of that tragedy.

“There’s was a small church, but their faith was not small,” Pence said.

And, he praised Southern Baptists for their faith and efforts to spread the gospel.

“The Southern Baptist Convention has always strived to reach the world for Christ and so you have throughout the decades,” Pence said. “I believe with all my heart that your faith has moved mountains.”

And he urged them to keep praying and doing God’s work.

“The truth is that no podium that the president and I will ever stand behind will be of greater consequence than the pulpits you stand behind every Sunday morning,” Pence said.

Uber driver gets 22 years for raping a passenger in Florida