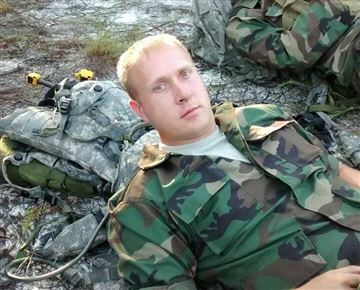 A National Guard soldier who had recently returned home from a yearlong deployment was found bound and shot to death in his Tennessee apartment, authorities said.

The body of Jacob Dean Bishop, of Lenoir City, was found Oct. 1 by his mother, the Loudon County Sheriff’s Office said in a news releaseposted on Facebook last week. Sheriff Tim Guider said deputies arrived at the apartment just before 7:45 a.m. and “quickly determined that foul play was involved.”

The death is being investigated as a homicide, he said.

Investigators said Bishop, 35, a father of two, was found physically bound and had been shot multiple times. Guider said it appears that the murder was an “isolated incident.”

In an update on the investigation Tuesday, authorities asked the public for information on a white SUV that witnesses said was seen in the area several days before Bishop was killed. The SUV was also seen leaving the area on the day of the murder.

As of Wednesday, no arrests had been made. Authorities said the suspect, or suspects, should be considered armed and dangerous “given the specifics of the murder.”

“We continue to work tirelessly and around the clock to bring the party, or parties, responsible for the murder of a U.S. Soldier to justice, and to provide the Bishop family with some form of closure”, the sheriff said in a statement on Facebook on Tuesday.

Bishop served in the 278th Infantry of the National Guard, according to an online obituary shared by his fiancee, Brittany Kindred. The sheriff’s office said he had returned home a few months ago after being deployed in Poland for a year.

Kindred posted several messages on Facebook pleading for information related to the case.