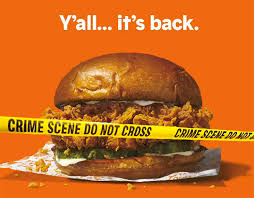 Popeyes sent fast food lovers across the United States into a frenzy in late August with the launch of its highly-anticipated new chicken sandwich, which was so popular that it...
by Raquel Jayson November 15, 2019 287 Views

Popeyes sent fast food lovers across the United States into a frenzy in late August with the launch of its highly-anticipated new chicken sandwich, which was so popular that it resulted in violence, Twitter feuds and an eventual sell out across the country. Employees even said that they had to work on “overdrive” to fill the extraordinary demand on sandwich orders, which sold out in less than two weeks after its initial launch.

After a two-month hiatus, the food chain brought back the hot menu item last week, which was once again met with long lines, brawls and even a stabbing in Maryland that took place after someone tried to cut the line.

The hype for the sandwich doesn’t end there, though. According to the Daily Mail, one man was able to somehow get his hands on the elusive order, even from the inside of a jail cell. Shared by @Eugene3005 to Twitter on Thursday, two photos allegedly show a prison inmate enjoying his Popeyes sandwich, although neither the person nor the jail are identified. “Try to see wat all the hype about,” the photo reads.

The Twitter user captioned the photo, “N***** in jail ate the Popeyes chicken sandwich before me IM SICK.” A subsequent photo shows a close up of the sandwich with the words “Thanks bae.” Since its posting on Nov. 14, the post has garnered over 20,000 retweets and thousands of responses, many of which question how the man got his hands on the coveted sandwich in the first place.

Niggas in jail ate the Popeyes chicken sandwich before me IM SICK pic.twitter.com/9TbrE0DO0W

While some questioned if the photo actually showed a college dorm room, one tweeter explained that if the man is, in fact, in jail, he might have received the sandwich from a jail employee, who would be allowed to bring in food if it’s “either…sealed or able to be opened to get checked.”