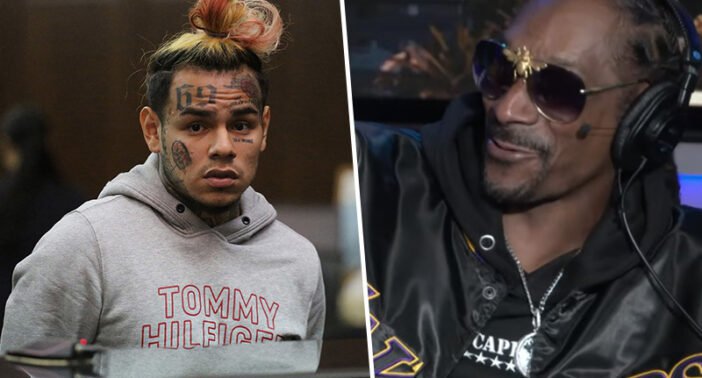 Snoop Dogg has taken aim at Tekashi 6ix9ine once again, drawing from his own personal experiences of the tough day-to-day realities of prison life.Advertisements

23-year-old Brooklyn rapper Tekashi 6ix9ine – real name Daniel Hernandez – has been widely taunted by those in the hip-hop world after ratting out members of the Nine Trey Bloods, his former crew.

Snoop has been among those gleefully mocking Tekashi69, previously emphasising how his friend and septuagenarian cookery show host Martha Stewart displayed way more street cred during her own time in the clink.Advertisements

Appearing on The Howard Stern Show alongside Seth Rogen, Snoop agreed with Stern’s assertion that Tekashi 6ix9ine was a ‘crazy m*therfucker’ for snitching on a number of former friends and associates in a bid for a reduced prison sentence.

Not for the first time, Snoop decimated Tekashi for his extremely questionable – not to mention dangerous – decision to rat on such a staggering scale, stating:

You know the rules and regulations of this shit, snitches get stitches, you know that shit! […]

When Stern remarked 6ix9ine had ‘sang like a canary’, Snoop went further, stressing:Advertisements

When did that [snitching] become the get out of jail pass? Because my thing is, if me and Seth [Rogan] go commit a crime right now.

If me or him decide to tell on each other, that means one of us gets out or do we both go to jail? I watch The First 48, which is one of my favourite shows, and normally when a motherfucker is associated with a crime, his ass is being charged with the crime.

Tekashi 6ix9ine was arrested in November 2018, and originally faced a minimum sentence of 47 years after being slapped with nine federal counts, including racketeering, firearms offences and drug trafficking.

Looking at a maximum sentence of life behind bars, Tekashi opted to enter into a guilty plea deal with prosecutors, agreeing to testify against fellow members of the Nine Trey Bloods.Advertisements

As things stand, Tekashi 6ix9ine’s fate is currently unclear. As recently reported by The New York Times, it’s likely he may now have to enter witness protection following his controversial testimony.

However, as noted by Snoop and Rogen, those decidedly unsubtle tattoos might well prove tricky for a person trying to stay under the radar…

You Can Buy Guinea Pig-Flavored Ice Cream In Ecuador