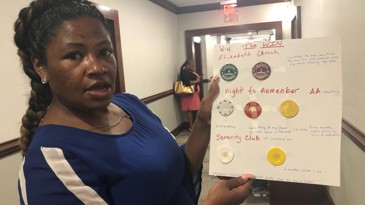 Angela Dalton, 41, of Atlanta shows off Narcotics Anonymous chips she earned after her Friday Aug. 30 hearing at Atlanta Municipal Court. She had been serving her 180 day...
by Raquel Jayson September 11, 2019 297 Views

Angela Dalton, 41, of Atlanta shows off Narcotics Anonymous chips she earned after her Friday Aug. 30 hearing at Atlanta Municipal Court. She had been serving her 180 day sentence on prostitution-related charges at a treatment center for women who have experienced sexual exploitation. WILLOUGHBY MARIANO/wmariano@ajc.com

Angela Dalton did not want to wait Friday morning at Atlanta Municipal Court. She arrived at her hearing with so much to share.

“Good morning, Judge Herman Sloan,” Dalton announced before her lawyer could begin. “I got a lot of good information to tell you.”

Dalton had been jailed dozens of times for minor, non-violent offenses. This time, Sloan ruled she could serve her 180 day sentence on prostitution-related charges in a residential treatment program — as long as she checked in with him regularly.

Friday was Dalton’s final scheduled appearance. If she did well, she could leave House of Cherith, which provides services for women who have experienced sexual exploitation. If she failed, she could be ordered back to jail.

Because of increasing public concern over how repeat offenders are returned to the streets, The Atlanta Journal-Constitution looked into Dalton’s lengthy criminal history for a recent story to find out what keeps metro courts and rehabilitation services from stopping those who commit serial, petty crimes.ADVERTISING

Neighbors in west Atlanta’s Ashview Heights neighborhood had tried for a decade to use the criminal justice system to find her treatment and get her off the streets. Dalton fell through the cracks or walked out of drug treatment.

“Angela has done an extraordinary job in our program,” Gardner said. “We are sorry she is leaving at some point because she has done so well.”

Her court-appointed lawyer Tunde Ezekiel said he was happy to represent Dalton.

“A lot of the time the criminal justice system can be punitive instead of rehabilitative,” Ezekiel told Sloan. “In this case it really was the latter.”

Dalton pulled open a plastic folder that bulged with proof of her accomplishments. A certificate showed she was baptized Aug. 18 at a local church. A photograph showed she was one of only three people chosen to work for pay at a recent book launch. Narcotics Anonymous chips taped to a sheet of poster board celebrated five months in recovery.

“I couldn’t let you down,” Dalton told Sloan. “You inspired me. I thought of you first.”

“Ms. Dalton, the person to not let down is you,” Sloan replied.

“I won’t let me down,” she reassured him.

Sloan suspended the balance of Dalton’s sentence, which meant she could leave her program. The courtroom burst into applause before she left.

Dalton will remain at the House of Cherith until she finds a job and housing so she can leave treatment.

After the hearing, Dalton arranged her mementos on a bench outside the courtroom to show them off. Her thoughts rushed and tumbled together.

She recalled the time she sang Fleetwood Mac’s song “Dreams” while standing on Joseph E. Lowery Boulevard. She talked about her mother who had died. She said she planned to get a job and maybe open a business downtown selling handmade candles.

She’d hang a sign above the door: “Angela Dalton of Atlanta.”

Being sober felt good, she said.

“It’s like each breath is a natural high,” Dalton said.