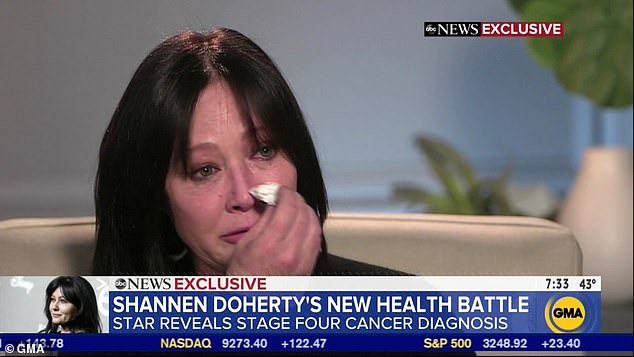 SHANNEN Doherty tearfully revealed she is dealing with stage IV breast cancer – five years after beating the disease. The 48-year-old actress gave a candid interview about her condition...
by Zach Freeman February 4, 2020 278 Views

The 48-year-old actress gave a candid interview about her condition on Good Morning America on Tuesday.

“It’s going to come out in a matter of days or a week that — I’m stage four,” she said in the emotional interview.

“So my cancer came back. And that’s why I’m here … I don’t think I’ve processed it.

“I definitely have days where I say why me. And then I go, well, why not me? Who else? Who else besides me deserves this? None of us do.

“But I would say that my first reaction is always concern about how — how am I going to tell my mom, my husband.”

After being in remission for a number of years, Shannen bravely admitted it was a “bitter pill to swallow in a lot of ways.”

Shannen was first diagnosed with the aggressive disease back in 2015 and has been open about her ongoing struggle with it.

The Charmed star decided to speak out about her illness due to a “horrific” legal battle with insurance company State Farm.

What does this diagnosis mean?

Stage IV breast cancer means the disease has spread to other parts of the body.

This stage is often described as “advanced” or “metastatic,”health experts say.

Treatment doesn’t cure the disease but it can shrink the cancer and slow it down.

This can help you to feel better and let you live longer.

Chemotherapy is often the best therapy for this stage because it can delay it spreading.

Surgery, radiation, hormonal therapy and targeted therapy can also be used to treat it.

Shannen said the dispute relates to her home which was practically destroyed by the California wildfires in 2018.

She said pursuing the case against State Farm was one of the most difficult decisions as she struggles with her illness.

She explained her breast cancer battle would have come out in the court documents and she wanted to “control the narrative.”

In the meantime, she decided to go ahead with the 90210 reboot four months after the death of her co-star Luke Perry.

Shannen said she wanted to prove “life doesn’t end the minute we get that diagnosis. We still have some living to do.”

Her pal and fellow 90210 star Brian Austin Green helped her to cope on the bad days when it all became too much, she said.

As well as the traumatic diagnosis, the actress claims she was forced to pay out of pocket for wildfire damage State Farm should have covered.

The company told ABC they empathized with Shannen’s health crisis but would “defend our position in court.” The Sun contacted them for comment.

This 22 Year Old Mother Has Died One Week After Noticing Bruises On Her Body: Leukemia