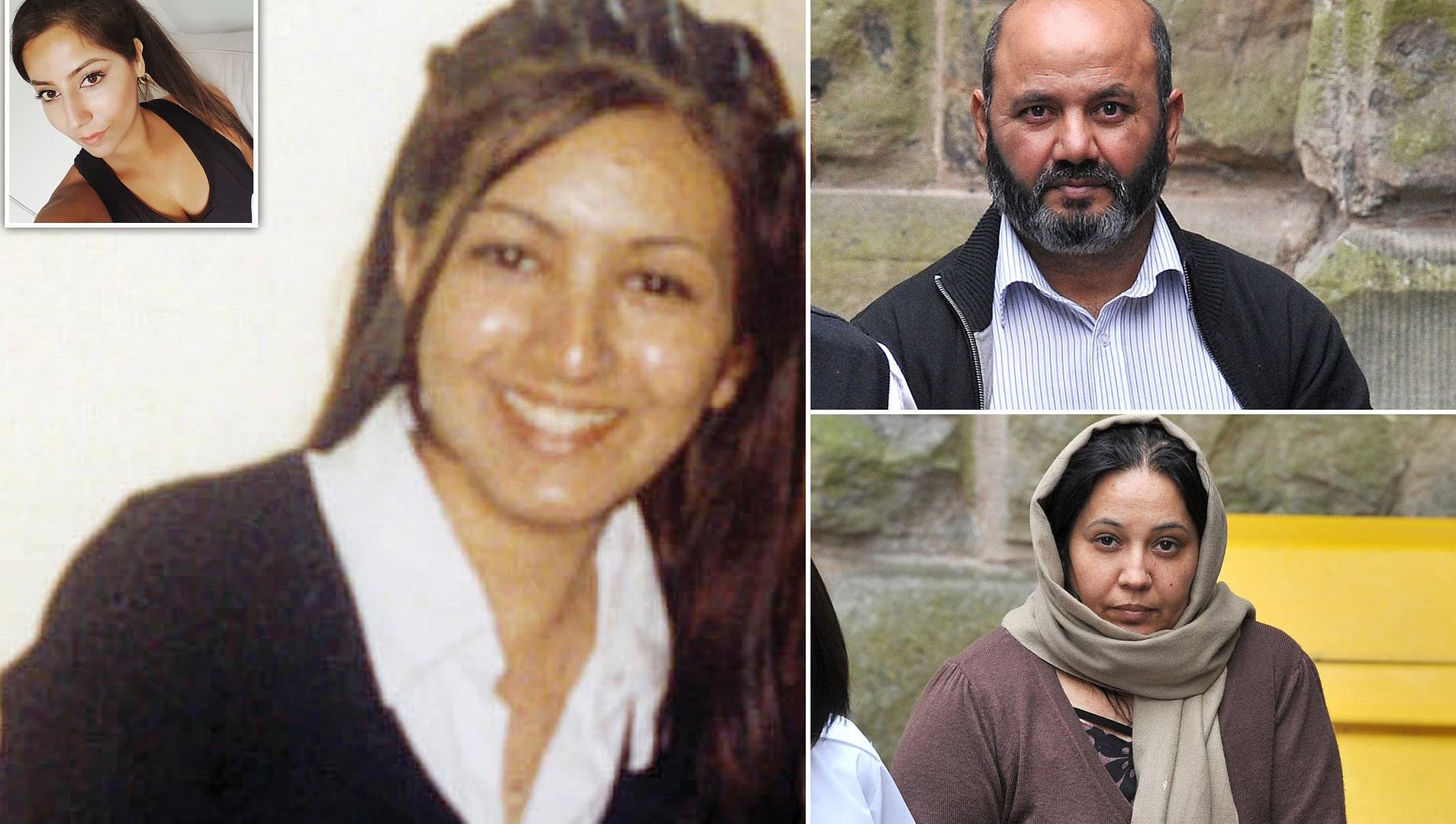 A WOMAN has told how she helped convict her best friend’s parents after they murdered her pal’s sister in an honour killing. In 2003, Shafilea Ahmed, 16, was killed...
by Raquel Jayson February 13, 2020 103 Views

A WOMAN has told how she helped convict her best friend’s parents after they murdered her pal’s sister in an honour killing.

In 2003, Shafilea Ahmed, 16, was killed by her mom and dad who then dumped her body and lied to the police about where she was.

Shahin Munir, 29, had carried around the secret of the murder for four years, sworn to secrecy by Shafilea’s sister, Mevish, known as Mev.

But she eventually decided to go to the police – and Shafilea’s parents were convicted in August 2012.

Product manager Shahin, from Warrington, Cheshire, said:  “Going to the police was the hardest thing I have ever done, but I knew it was right.

“I helped to get justice for Shafilea. But in doing so, I lost my best friend, Mev.”

Shahin was close friends with Mev and knew the Ahmed family well.

And she knew Mev had witnessed the horrendous “honour killing” — because she had confided in Shahin, through a series of emotional letters.

Shahin made a pact with Mev that she would never tell anyone what she knew.

But in July 2012, following coverage of the murder trial against Shafilea’s parents, Farzana and Iftikhar Ahmed, Shahin decided to break her promise.

Shahin explained: “I knew it was the right thing to do.

“But Mev would never tell on her mum or dad because it would be like she was betraying them.

“That weighed heavily on my mind and I didn’t want anything bad to happen to Mev.

“I hurt my best friend who trusted me and confided in me.

“Yet an innocent young woman lost her life.

“And that gave me the strength to go through with it. It’s not about me, it’s not about her mum and dad either. It’s about Shafilea.”

Shahin and Mev met when they were just seven and attended the same mosque in Warrington, Cheshire.

Shahin explained: “I was brought up as a Muslim but things were pretty relaxed at home. But I knew Mev’s house wasn’t the same.”

Their friendship cooled as they grew older but the pair became close again at 17 while studying at the same college.

Shahin was also friends with Mev’s other sister, Alesha – who, much later, was to give evidence for the prosecution.

Shahin said: “Alesha and I saw less of each other after I started college, and I became really friendly with Mev. We were best friends. She was so easy to talk to; really funny and likeable.

I helped to get justice for Shafilea. But in doing so, I lost my best friend, Mev.Shahin Munir29

“I knew Shafilea had been missing for a few years, and I’d seen the missing posters, but I was just a kid when she disappeared.

“I never asked Mev or Alesha about it, because I didn’t want to pry. But I knew they really missed their sister.”

For months after they started college, Shahin sensed something was bothering Mev.

She said: “I wanted to find out what was wrong, but I never had a minute with Mev on her own. She was never allowed out on her own. Her mum collected her from college and kept a tight rein on her.

“Her parents knew her pin number for her phone so they read all her text messages.

“I knew her home life was very strict. But I had no idea of how bad it really was.”

In August 2008 Mev, then 18, finally plucked up the courage to tell Shahin what happened to Shafilea.

Shahin suggested Mev write down what was bothering her. Mev then wrote two letters which she gave to her friend.

Shahin said: “I read the letters in my bedroom and my blood ran cold. It was horrifying. But at the same time, it did explain Mev’s behaviour – and why she was so frightened and anxious all the time.

She continued: “She was terrified that she might be next.”

The next day the girls met in their local park to discuss the letters.

Shahin said: “I asked her to read them and she couldn’t because she was so upset. She begged me not to tell anyone and I promised I wouldn’t.

“She told me her dad started beating Shafilea and that she had tried to stop it but her mum knocked her back.

“One of them used a plastic bag to suffocate her and within one or two minutes, that’s it — she was gone.

“Shafilea had wet herself in the struggle and for weeks after her mum was constantly cleaning the sofa to get rid of it.”

She continued: “Mev told me that her and Alesha were at the bedroom window and they saw her dad put something in the boot and drive off.

“Mev thought they had taken her body in a suitcase because the next morning there was an empty suitcase in the kitchen.

“She was trying to keep it together but it was obviously hurting her. She said the next day her mum was like nothing had happened.”

Mev also wrote in the letters about how she was plagued by nightmares after seeing the murder.

Shafilea’s father was believed to have driven his daughter’s body 70 miles to Sedgwick, in the Lake District — where he dumped it next to the River Kent.

Shahin was a frequent visitor to the family home after Shafilea went missing but says the parents quickly became hostile towards her.

She said: “They never talked about who had murdered Shafilea. They just got on with life.

Twice, Mev ran away from home, and came to stay with me at university. She thought her parents were going to kill her. It was like a waiting game.Shahin Munir29

“Her parents didn’t like me and I think they suspected that Mev had confided in me.

“I wrestled with my conscience about whether to go to the police. I knew it was my duty to report it.

“But I had made Mev a promise. She trusted me. I was her only confidante.

“And I knew that if I went to police Mev’s life would be in danger. I knew she would never have the strength to testify against her parents, and so it would leave her in an impossible position.

“I tried many times to persuade Mev to go to the police, but she told me that sending her parents to jail would not bring her sister back, and she begged me to keep her secret.

“I was terrified of her parents myself. I called the police, more than once, because I was worried about Mev’s safety. They would go and check and her, just to put my mind at rest.

“Twice, Mev ran away from home, and came to stay with me at university. She thought her parents were going to kill her. It was like a waiting game.”

Shahin kept the secret to herself for four years.

But Alesha went to the police and told them she had seen her parents kill Shafilea.

The Ahmeds appeared in court in July 2012.

The court heard that Shafilea refused to accept an arranged marriage during a visit to Pakistan just before she died in 2003 — and even drank bleach in an apparent suicide bid.

Prosecutors said the Ahmeds killed their daughter because they felt her “Western” habits such as wearing make-up and talking to boys brought dishonour on the family.

It was during the evidence that Shahin, who studied psychology at university, decided to go to the police, at last.

Shahin said: “When Alesha said in court that her sister’s eyes were wide open, after she died, it just brought it all back.

“I rang the police and told them I could prove Alesha wasn’t lying. I had letters for them that Mev had written four years ago. Mev didn’t know I still had them.

“She had asked for the originals back and ripped them up, but I had photocopied them.

“I called Mev, before I went to the police. I was honest with her. I told her I had to do what was right.”

Mev sent Shahin a text message asking her to tell the police she had lied. But Shahin refused, and spent four days in court, giving evidence against the Ahmeds.

Her evidence was crucial in their conviction.

Now, Shahin has no regrets about what she did, despite the court case affecting her university studies, and causing her a lot of anxiety. But her friendship with Mev is in tatters.

Mev blames me for her parents being in jail. She feels so much anger towards me and we don’t speak any more.Shahin29

An annual day of remembrance, inspired by Shafilea, is held each year on her birthday, July 14, to remember those lost to honour killings.

Shahin said: “Mev blames me for her parents being in jail. She feels so much anger towards me and we don’t speak any more.

“I’ve had a lot of bad feeling from former friends and our community.

“It’s heart-breaking but I still feel I did the right thing.

“I think of Shafilea every day, wondering what kind of young woman she would have become. By speaking out, I hope I can save another life.”

OMG! Rapper Jumps In Audience When Fan Interrupts Him During His Acceptance Speech At The NME Awards