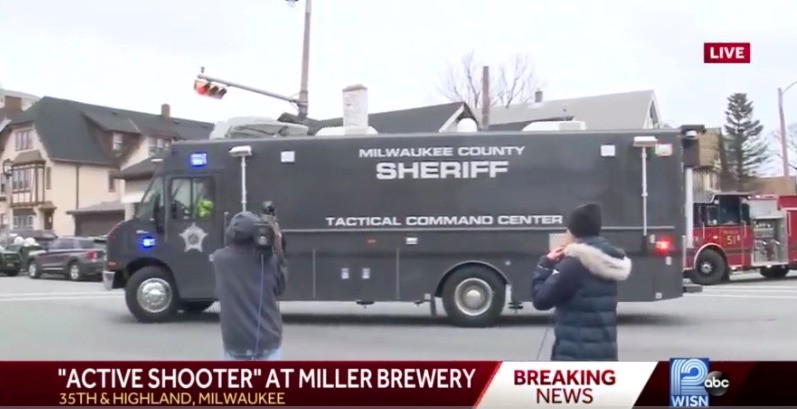 SEVEN people have reportedly been killed at the Molson Coors Brewing Company plant after a former employee went on a shooting rampage. Milwaukee police confirmed they were investigating “a...
by Zach Freeman February 26, 2020 398 Views

SEVEN people have reportedly been killed at the Molson Coors Brewing Company plant after a former employee went on a shooting rampage.

Milwaukee police confirmed they were investigating “a critical incident” at the Wisconsin city this afternoon amid claims they were on the scene of an active shooting.

The Milwaukee Journal Sentinel reported seven people were fatally gunned down in the crazed rampage – including the shooter, according to ABC News, who say eight people were shot.

Police sources told WISN 12 the gunman may have been a former employee who had been fired from the company – but this has not been officially confirmed by Milwaukee PD.

It’s not clear how the shooter died but he was reportedly sacked from his position earlier today before returning the the brewing company and opening fire inside with a silenced gun, according to CBS.

Milwaukee Mayor Tom Barrett confirmed there were several people killed in the bloodbath in a press briefing shortly after 5.30 pm but he declined to give the exact number.

“It’s a horrible day for employees,” Barrett told reporters, saying aurthorities pin-pointed a particular buildings. “Multiple people that have died including the shooter.”

“We’re urging all residents to stay aeway from this area simply due to traffic diversions,” he added, as police confirm there is no active threat. “They’re continuing their sweep.”

An employee at the beer brewing facility told the station they were alerted to an active shooter near Building 4 in an email, with other workers received a text alert.

Local police warned people to avoid the area as WISN reports there was a huge response from law enforcement – including FBI agents, US Marshals, Sheriff’s deputies, a bomb squad, and even a canine unit on the active scene.

The Bureau of Alcohol, Tobacco, Firearms and Explosives (ATF) also arrived there this afternoon after cops responded to the emergency shortly after 2pm.

Harley Davidson and other nearby businesses were placed on lockdown as a result of the shooting as well as the nearby Story Elementary school.

Anxious parents waited outside the school, which is directly behind with the brewery building, to be reunited with some of the elementary school children.

Roll calls were also underway at the school as the Story Elementary administration tries to account for every child in their care.

Marquette University police confirmed MUPD were on the scene but the college campus is not on lockdown like a number of other local businesses.

“There is no threat to the campus,” a statement from the university read, confirming that their college police responded immediately.

Two Milwaukee county buses arrived outside the closure area as employees were escorted from the brewery visitors center towards the waiting vehicles, according to WISN.

The Molson Coors company – formerly, MillerCoors – has around 1,400 employees in Milwaukee and workers were forced to take shelter at the complex.

“Our top priority is our employees,” read a press release from the company, who said they are working with local police on this ongoing situation.

Cops in protective vests ran on the scene near North 35th Street and West Highland Boulevard to respond to the terrifying incident at the beer company’s headquarters.

Police filled in Barrett who has just arrived at the enormous complex where fire trucks lined the street and first responders were on hand.

Anyone over the age of 18 can own and openly carry a firearm in the state of Wisconsin, according to the US Concealed Carry Association (USCCA).

Local reports acknowledged it’s not the first mass shooting Wisconsin has experienced: the 2012 shooting at Sikh temple in suburban Milwaukee resulted in the deaths of six people.

Tyler Perry’s Nephew, 26, Dies by Apparent Suicide While in Prison