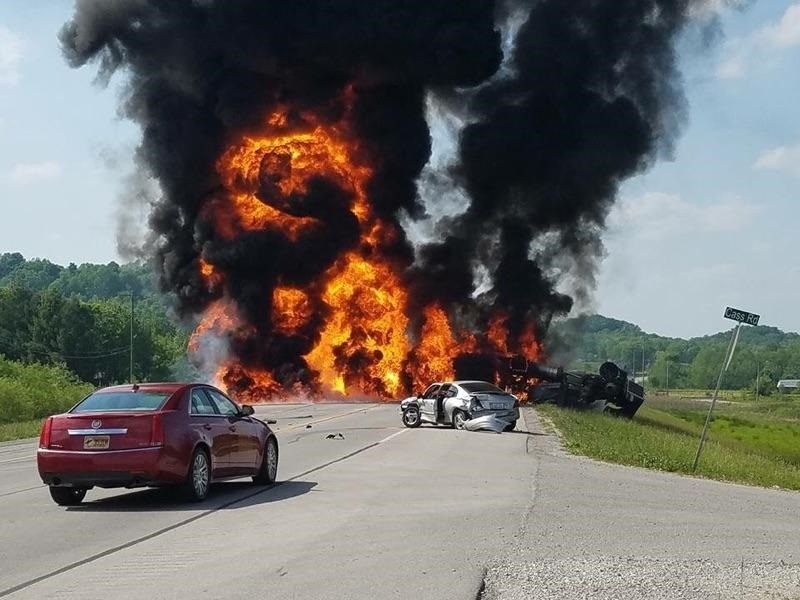 MOUNT OLIVE, N.J. (AP) – A school bus taking children on a field trip to a New Jersey historic site collided with a dump truck Thursday, ripping the bus apart and killing a teacher and student.

The crash left the bus lying on its side on the guardrail of Interstate 80 in Mount Olive, its undercarriage and front end sheared off and its steering wheel exposed. Some of the victims crawled out of the emergency exit in the back and an escape hatch on the roof. More than 40 people were taken to area hospitals.

“I heard a scraping sound and we toppled over the highway,” said fifth-grade student Theo Ancevski, who was sitting in the fourth row of the bus and was treated at a hospital for cuts and scrapes. “A lot of people were screaming and hanging from their seatbelts.”

New Jersey Gov. Phil Murphy said that one adult and one student were killed. Murphy said the truck driver was hospitalized, but officials didn’t reveal his condition.

The front end of the red dump truck was mangled in the wreck, which took place about 50 miles (80 kilometers) west of New York. The truck was registered to Mendez Trucking, of Belleville, and had “In God We Trust” emblazoned on the back of it.

Police didn’t release details of how the crash happened, but the trucking company had a string of crashes in recent years and a higher than average rate of violations that sidelined its vehicles, according to federal safety data.

There were 45 people, including 38 students, on the bus. Forty-three people from the bus and the truck driver were taken to three area hospitals, where some were listed in critical condition.

The bus was owned by the school district and had seat belts, according to Paramus schools superintendent Michele Robinson. There is no federal requirement for seat belts on full-sized school buses, but six states including New Jersey require them.

The bus was one of three taking students from East Brook Middle School to Waterloo Village, a historic site depicting a Lenape Indian community and once-thriving port about 5 miles from the crash scene. The other buses made it to the site, but returned to the school about 50 miles (80 kilometers) away.

Some of the children were inside the bus and some outside when first responders arrived, according to Jeff Paul, director of the Morris County Office of Emergency Management.

“We had patients laying all over the median and on the interstate,” Paul said. “There were all kinds of injuries, every injury type you could expect in a crash of his magnitude.”

Paul said some of the first responders were “very emotionally upset. It was a rough scene to see.”

Thuy Nguyen, a nurse from Paramus, said she rushed to the school where her son was taking a test after hearing the news.

“My heart just dropped, You hear the name of the school…” she said before trailing off.

Robinson said that the district was cancelling school trips for the rest of the year.

Mendez Trucking has about 40 drivers and trucks, according to the Federal Motor Carrier Safety Administration. Its trucks have been in seven crashes in the last two years, none before Thursday’s fatal, according to FMCSA. A message left with the company wasn’t returned.

Mendez has a higher than average vehicle out-of-service rate, which means inspections found violations which had to be corrected before the vehicle could be returned to service. Mendez’s rate was 37.9 percent, according to FMCSA. The national average is 20.7.

“It’s an alarmingly high accident rate for such a small, little fleet,” said trucking safety expert Paul Herbert, who runs the Western Motor Carrier Safety Institute in California. “These (previous accidents) should be eye-openers for the company, for them to say, ‘hey, we need to do something before the big one happens.’ Sadly, it looks like maybe it has.”

A Mendez-owned dump truck driven by a driver police say had a suspended license struck and killed a French fashion stylist in Manhattan in January 2011, according to court records. Laurence Renard was severed in half by the truck, which was hauling tons of material for the Second Avenue Subway project.

Herbert said the company had poor marks across the board, from maintenance to safe driving. He said the out-of-service rate “speaks volumes as to the adequacy of their safety management program.”

Mendez trucks have racked up more than 130 violations in the last two years, according to FMCSA, including 27 for excessive weight, 17 for leaking, spilling or falling cargo and four speeding violations – three of them this year.

Mendez was fined $22,850 in 2016 for violating regulations on inspections, repairs and maintenance and post-crash drug and alcohol testing, according to the FMCSA.

According to the National Highway Traffic Safety Administration, 118 people on school buses were killed in crashes from 2007-2016, the last year for which data is available.

Of those killed, 68 were passengers – including 58 school-age children – and 50 were drivers. School bus crashes killed 902 people in other vehicles over that span.