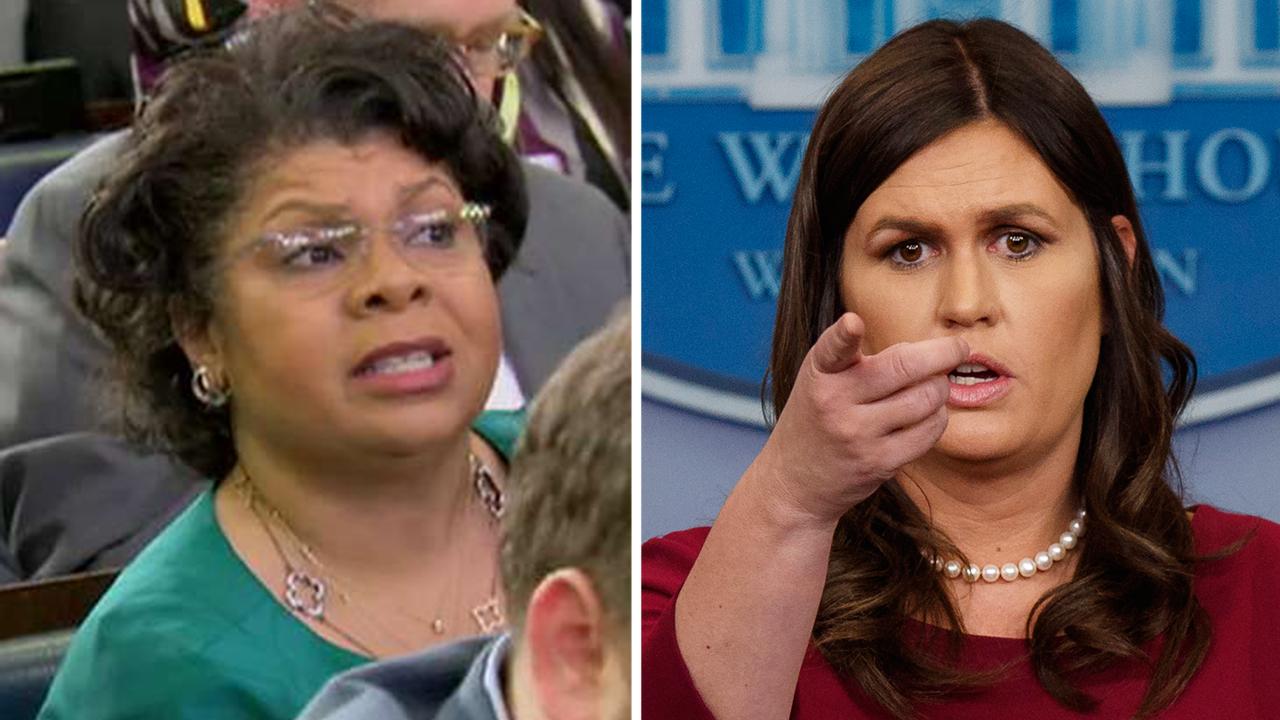 Sarah Sanders fires back at April Ryan: ‘This journalist is not taken seriously’

White House press secretary Sarah Huckabee Sanders said on Monday that April Ryan’s recent comment around lopping heads off in calling for her firing proves why the reporter “is not taken seriously.” “I have...
by Raquel Jayson April 22, 2019 362 Views

White House press secretary Sarah Huckabee Sanders said on Monday that April Ryan’s recent comment around lopping heads off in calling for her firing proves why the reporter “is not taken seriously.”

“I have had reporters say a lot of things about me. They said I should be choked. I should deserve a lifetime of harassment. I certainly never had anybody say I should be decapitated,” Sanders told “Fox & Friends” on Monday. “A new low for liberal media.”

“I think it just once again proves why this journalist is not taken seriously,” Sanders said before later adding, “I think our team needs to remain focused on how we keep pushing those things that actually help Americans and not engage in these petty fights with journalists that again shouldn’t be taken seriously. I don’t think are taken seriously and looking for couple more minutes on TV.

“Frankly I feel sorry for them,” she said. “They lost the collusion battle.”

Will you get into heaven? The answer is no! https://t.co/oUpSVVbLx2

“Not only does she not have any credibility left, she lied,” Ryan told CNN anchor Erin Burnett late last Thursday. “She outright lied and the people, the American people, can’t trust her. They can’t trust what’s said from the president’s mouthpiece, spokesperson, from the people’s house.”

“When there is a lack of credibility there, you have to start and start lopping the heads off. It’s ‘Fire Me Thursday’ or ‘Fire Me Good Friday.’ she needs to go,” Ryan added.

Ryan also declared on Twitter over the Easter holiday weekend that Sanders’s father, former Gov. Mike Huckabee (R-Ark.), Mike Huckabee, who also a Christian minister and Fox News contributor, will not get into heaven.

“Will you get into heaven? The answer is no!” Ryan tweeted.

Mueller’s redacted report, released last Thursday, showed that Sarah Sanders misled reporters during a May 2017 daily press briefing shortly after President Trump fired former FBI Director James Comey. She told the press that “countless” rank-and-file FBI agents had lost confidence in Comey, but she told Mueller’s team her remark was unfounded and was a “slip of the tongue” made “in the heat of the moment.”

Sarah Sanders told Fox News host Sean Hannity on Thursday night that she was wrong to use the word “countless,” but did say it was “not untrue” that “a number of current and former FBI agents agreed with the president” about Comey and referred to him as a “disgraced leaker.”

Comey testified to lawmakers in a May 2017 Senate hearing that he deliberately leaked a memo from a dinner meeting with Trump to a friend at Columbia University after he was fired in order to prompt the appointment of a special counsel. Comey’s friend, Daniel Richman, sent the memo to The New York Times.