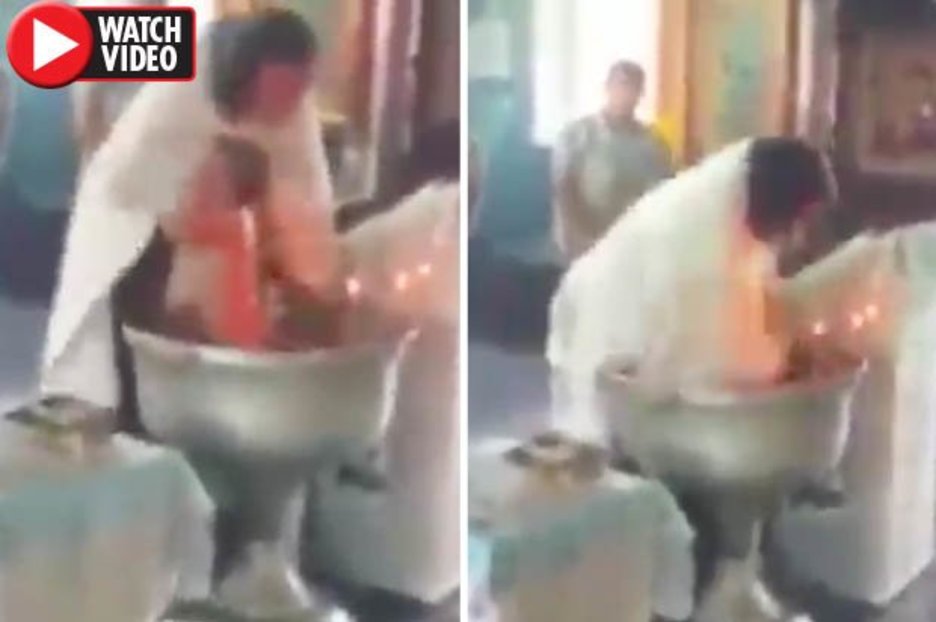 A “SADISTIC” priest has been suspended for a year after a video went viral of  him “violently” baptising a “panic-stricken” baby. The disturbing footage shows the Russian Orthodox Priest...
by Joy Smith August 12, 2019 448 Views

A “SADISTIC” priest has been suspended for a year after a video went viral of  him “violently” baptising a “panic-stricken” baby.

The disturbing footage shows the Russian Orthodox Priest Fotiy Necheporenko forcefully submerging the naked one-year-old boy in the font while the child and her mother scream in terror.

The frightened child was scratched and bruised on his neck and shoulder from the ordeal, it was reported.

Distraught Anastasia Alexeeva, 24, tried to intervene to grab back her child from the wild cleric.

But the 55 year old priest refused and in the fracas the woman’s headscarf almost caught fire on a candle.

“The baby has  scratches on his shoulder and neck,” she said.

“He is afraid of everything now.

“He is in panic and hysteria.”

After she got her shaking son Demid back, the priest told her: “I have been christening children like this for 26 years.”

“He did everything to hurt the child,” said Anastasia.

“He saw that he was big, that it was not possible to dive him into such a small font.

“He had to splash the water on his head.

“But he still decided to do it his way.

“The little one was crying and wriggling.

“I was afraid, I ran to him, I tried to take the child away.

“I nearly caught fire myself because my scarf touched the candles around the font.”

Fontanka news agency reported: “The sacrament ceremony that cost 3,500 roubles (£45) resembled a sadist exercise, and the baby got scratches and bruises.”

A church source said “violent” was a mild description.

Before he was suspended, the priest strongly defended himself.

He declared: “So what actually happened? Nothing, and it is not my fault at all.

“It was all about the mother’s high emotions.

“She is a person without church experience.

“She was not ready for christening.

According to Orthodox church rules, the baby must be dived three times under the water.

“This is what I did.

“The baby did not swallow any water, he did not hit the walls of the baptismal font.

“I have been serving for 26 years and I have always christened children like this.”

He insisted: “I performed my church duty.”

Before the service, the priest had accused Anastasia of not knowing the Lord’s Prayer by heart, and not being sufficiently religious.

After the service she reported the priest to police at Gatchina near St Petersburg.

They have launched a probe.