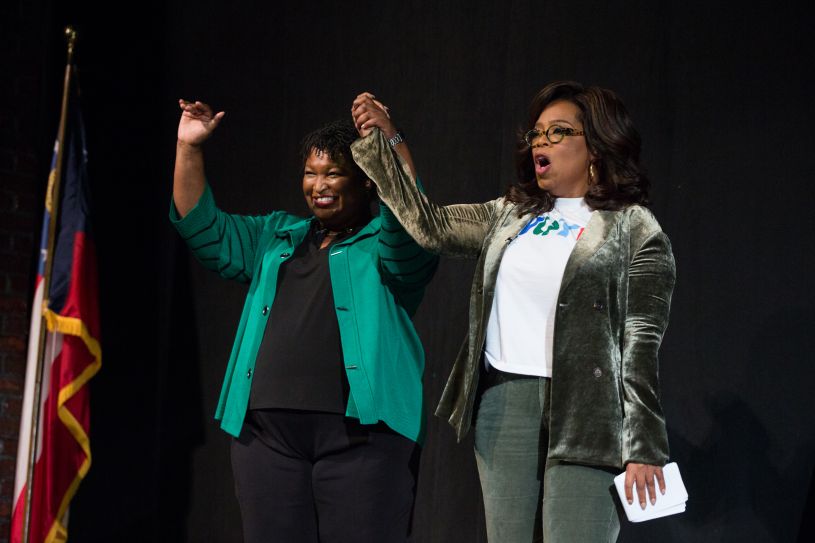 Sad: A Media Outlet Refers To Stacey Abrams As “Aunt Jemima” And Says Oprah Is The Trick To Win Fat White People.

Article Courtesy Of The Washington Post: For years, Oprah Winfrey’s campaign rally appearances and political endorsements have posed a difficult question for anyone who happens to be advocating...
by Raquel Jayson November 5, 2018 739 Views

For years, Oprah Winfrey’s campaign rally appearances and political endorsements have posed a difficult question for anyone who happens to be advocating for the candidate on the other side: How do you contend with the star power of a billionaire Queen of All Media who is also one of the world’s most influential people?

For one robo-call producer speaking into a microphone in what we can only assume is a dark basement, the answer is clear: an 11th-hour infusion of good old-fashioned racism.

“This is the magical Negro Oprah Winfrey asking you to make my fellow Negress Stacey Abrams the governor of Georgia,” the robo-call begins, before spewing nearly 60 seconds of racismcoupled with a dash of anti-Semitism. Georgians began hearing the call last week, according to the Hill.

The video is made by TheRoadToPower.com, an anti-Semitic video podcasting website that the Anti-Defamation League says “has zeroed in on divisive political campaigns across the country,” including two of the three races that feature a black candidate for governor. It’s unclear how many Oprah Winfrey robo-calls have been received.

The robo-call labels Abrams “a poor man’s Aunt Jemima,” a reference to the black lady on the front of the pancake mix box, an image that has itself been derided as a racist symbol. It suggests that Winfrey is a media construction made to trick fat, white women into voting. And it mocks what Winfrey has called one of her all-time happiest moments in media.

In a statement, the Abrams campaign called the robo-calls a desperate and “vile” attempt to sway voters using “poisonous thinking.”

“It is not surprising that in a race that has consistently been very close, we’ve seen several weeks of increasing desperation from many dark corners trying to steal the election, cheat, lie, and prey on people’s fears rather than having the respect to listen to voters and speak to their hopes,” Abrams spokeswoman Abigail Collazo said in the statement, which tried to link the robo-calls to a tone set by President Trump and Abrams’s Republican opponent, Brian Kemp.

In a statement emailed to the Hill, Kemp called the robo-call “vile,” “racist” and “absolutely disgusting.”

“I stand against any person or organization that peddles this type of unbridled hate and unapologetic bigotry,” he said.

But Abrams said Monday that Kemp has been racially insensitive in the past.

“I think it’s a little late for him to repudiate racist remarks given that he’s stood with someone wearing an anti-Islam T-shirt,” she said on CNN. “He refused to denounce the same man earlier who accused black veterans of not being people who support our country.”

She also addressed the racist attacks in the robo-call.

“Regardless of any racist tropes that are out there, I believe in what is best for Georgia,” she said. “Yes, I am changing the face of what leadership looks like, but I’m doing so having the greatest experience of anyone on the ballot.”

The insidious tone of the poor-audio call was at odds with Winfrey’s words on the campaign trail.

She and Abrams are both black women from Mississippi, and the media titan spoke of the sacrifices their ancestors had to make to obtain the right to vote.

“Make your voice heard on Nov. 6. We have this incredible opportunity to make history. We have our inalienable right, because the one place that all people are equal is at the polls,” she told voters.

“And I’m here today because of the men and because of the women who were lynched, who were humiliated, who were discriminated against, who were suppressed, who were repressed and oppressed, for the right of the equality of the polls. And I want you to know that their blood has seeped into my DNA, and I refuse to let their sacrifices be in vain.”

[‘Hi, I’m Oprah’: The Georgia governor’s race is at full boil — and now the cavalry has arrived]

If the voice and the overtly racist tone on the robo-call sound familiar, it’s because it’s from the same studio that stuffed a “We Negroes” robo-call down the throats of Florida voters, who are deciding whether they want Tallahassee Mayor Andrew Gillum to be the state’s first black governor.

“Well, hello there,” that call begins, as the sounds of drums and monkeys can be heard in the background, according to the New York Times. “I is Andrew Gillum.”

“We Negroes . . . done made mud huts while white folk waste a bunch of time making their home out of wood an’ stone.”

The speaker goes on to say Gillum will pass a law letting African Americans evade arrest “if the Negro know fo’ sho’ he didn’t do nothin’.”

In a statement emailed to The Washington Post, Gillum campaign spokesman Geoff Burgan said: “This is reprehensible — and could only have come from someone with intentions to fuel hatred and seek publicity.”

‘We’re the church that shoots back,’ says pastor of vandalized church!