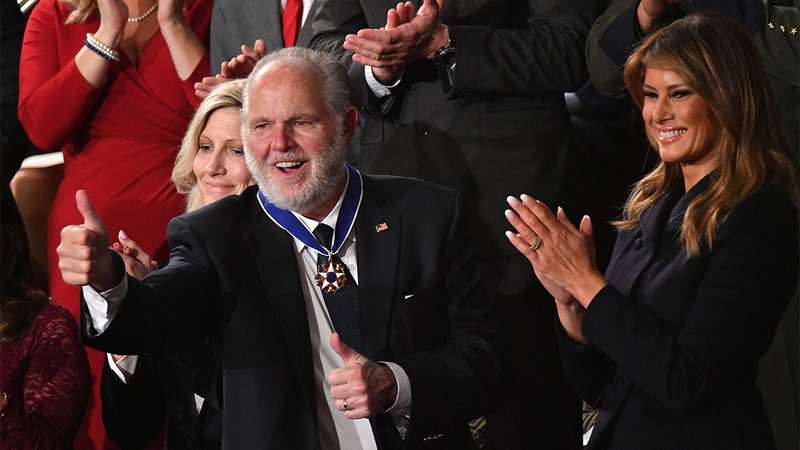 Rush Limbaugh, the conservative media icon who for decades used his perch as the king of talk-radio to shape the politics of both the Republican Party and nation, died...
by Raquel Jayson February 17, 2021 166 Views

Rush Limbaugh, the conservative media icon who for decades used his perch as the king of talk-radio to shape the politics of both the Republican Party and nation, died Wednesday after a battle with cancer. He was 70 years old.

Limbaugh’s wife Kathryn made the announcement on his radio show Wednesday.”As so many of you know, losing a loved one is terribly difficult, even more so when that loved one is larger than life,” she said. “Rush will forever be the greatest of all time.”Limbaugh announced in February 2020 that he had been diagnosed with advanced lung cancer.

Limbaugh continued to host his show while undergoing treatment, and he told listeners that he remained hopeful he would defeat the disease.

A pioneer of AM talk-radio, Limbaugh for 32 years hosted “The Rush Limbaugh Show,” a nationally-syndicated program with millions of loyal listeners that transfigured him into a partisan force and polarizing figure in American politics. In many ways, his radio show was like the big bang of the conservative media universe. “The Rush Limbaugh Show” helped popularize the political talk-radio format and usher in a generation of conservative infotainment.Using his sizable platform, Limbaugh advanced conservative ideas, though he often waded into conspiratorial waters and generated controversy for hateful commentary on gender and race. During the course of his career, Limbaugh started a number of fires with his commentary.close dialog

Get a nightly analysis of all the day’s media news in your inbox.Sign Me UpBy subscribing you agree to ourprivacy policy.Limbaugh offered a conditional apology after he accused actor Michael J. Fox of exaggerating his Parkinson’s disease and apologized when he insulted law school student Sandra Fluke. He relentlessly attacked President Barack Obama, going as far as to fan the flames of birtherism, the discredited idea that Obama was born outside the United States and therefore not eligible to be president. And, in the last few years, he peddled “deep state” conspiracy theories, providing cover for former President Donald Trump during his term, who he counted as a friend.More recently, Limbaugh appeared to approve of some forms of political violence in the immediate aftermath of the January 6 insurrection at the US Capitol. He also drew backlash at the outset of the pandemic when he dismissed the coronavirus as the “common cold” and contended that it was being “weaponized” by members of the mainstream press to bludgeon Trump and harm his re-election chances. The missive was classic Limbaugh, who built a career on expressing strong distrust of the established press order and referred to himself as “America’s Anchorman.”Despite his penchant for pushing conspiracy theories and peddling misinformation that benefited Trump and the other political figures he supported over the years, Limbaugh acknowledged the weight of his words in a 2008 interview with The New York Times.”I take the responsibility that comes with my show very seriously,” Limbaugh told the newspaper. “I want to persuade people with ideas. I don’t walk around thinking about my power. But in my heart and soul, I know I have become the intellectual engine of the conservative movement.”