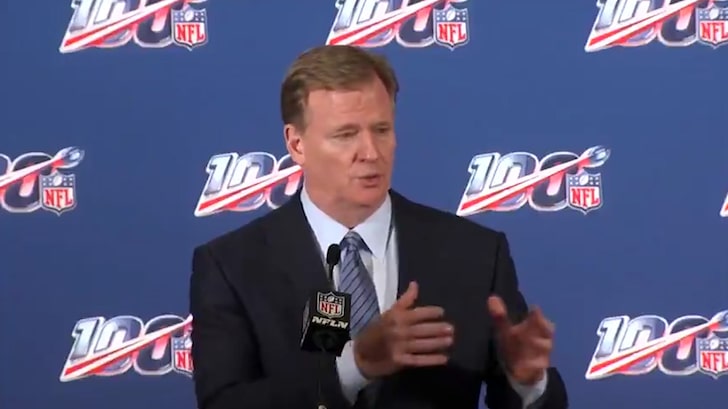 BREAKING NEWS GOODELL ON PATRIOTS’ INVESTGATION NFL commissioner Roger Goodell says the league is conducting a thorough investigation into the New England Patriots to see if they used a video crew...
by Zach Freeman December 11, 2019 341 Views

NFL commissioner Roger Goodell says the league is conducting a thorough investigation into the New England Patriots to see if they used a video crew to try and cheat.

“Obviously it’s under review,” Goodell said to the media while in Dallas … “We’re gonna be thorough and we’re gonna get all the facts and we’ll go from there.”

Goodell was also asked if the Patriots’ history of using illegal surveillance — aka the 2007 Spygate scandal — would factor in to the investigation.

“Of course that’s a factor. The key things are the new information that we have. That [old] information we obviously already have. But, I think the issue is what information do we have from this incident?”

As we previously reported, the Cincinnati Bengals told the NFL a Patriots staffer was illegally shooting video of their sidelines during a game. The Patriots admitted wrongdoing but insist it was a mistake and not intentional. The team is adamant they did NOT cheat.

There was A LOT more during the media event … Goodell was also asked about Colin Kaepernick and Antonio Brown.

When asked about the Colin Kaepernick workout, Goodell said — “It was about opportunity, a credible opportunity. He chose not to take it, and I understand that.”

Colin famously backed out of the Nov. 16 workout — organized by the NFL — over a dispute regarding media access and the legal language on the workout injury waiver.

Instead, Kaepernick held his own workout at a nearby high school and called for interested teams to hit up his agent. So far, he’s still unsigned.

As for Antonio Brown … Goodell was questioned about the league investigation into sexual assault and harassment claims against the WR.

Goodell says his investigators DID meet with Antonio but “they have more work to do.”

“They’re following up on that and I’ll get an update when they have more information.”