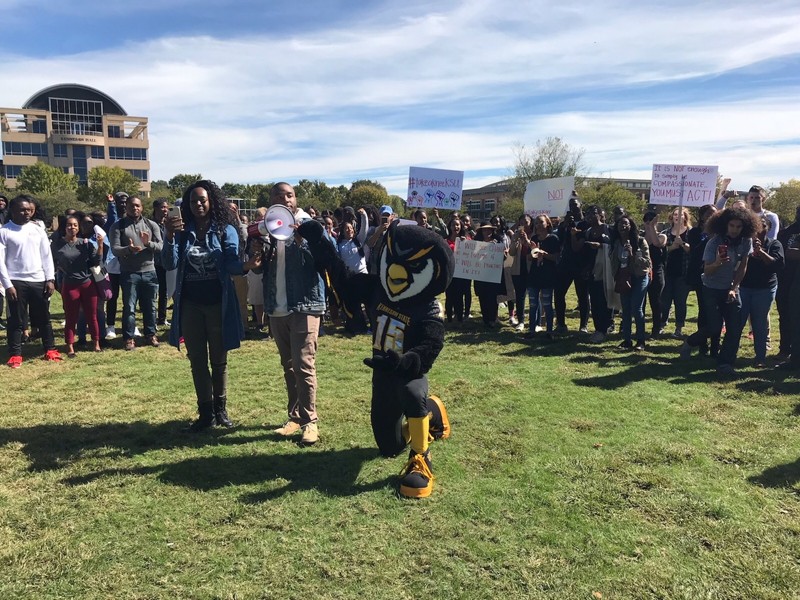 KENNESAW, Ga. – Kennesaw State University’s president has had a changed his mind. Sam Olens will allow the cheerleaders to be on the field during the National Anthem at...
by Zach Freeman November 9, 2017 459 Views

KENNESAW, Ga. – Kennesaw State University’s president has had a changed his mind. Sam Olens will allow the cheerleaders to be on the field during the National Anthem at this weekend’s home football game. The cheerleaders were forced to stay in the tunnel for the past two home games after five of them took a knee.

“This has to do with social injustice, police brutality, criminal justice reform, and a push to move America in a more active way where we’re looking at race relations,” said Davante Lewis, a spokesman for the five cheerleaders.

But university officials saw it as a sign of disrespect and banned the cheerleaders from the field until after the national anthem.

Over the past few weeks, there have been several protests on campus supporting the five cheerleaders, who have come to be known as the Kennesaw Five.

“After much reflection, I have decided that at Kennesaw State’s next home game on November 11, the pre-game program will be restored to its original format, with the cheerleaders taking the field before the singing of the National Anthem. I will stand during the National Anthem to honor the women and men who have served in our nation’s armed forces. While I choose this action, I do not believe that this debate has to be a choice between honoring our veterans and protecting the freedom of speech. We must be able to do both.”

Lewis questioned the timing of the decision. This Saturday is the Military Appreciation Game.

Lewis said the Kennesaw Five plan to take a knee at Saturday’s game.

“This wasn’t a photo op, this wasn’t a press showing, this is a movement from their hearts and they will continue to do that,” said Lewis.

Will the merger of AT&T and Time Warner go thru ???

Indictment Not ‘Imminent’ says the rep for Harvey Weinstein