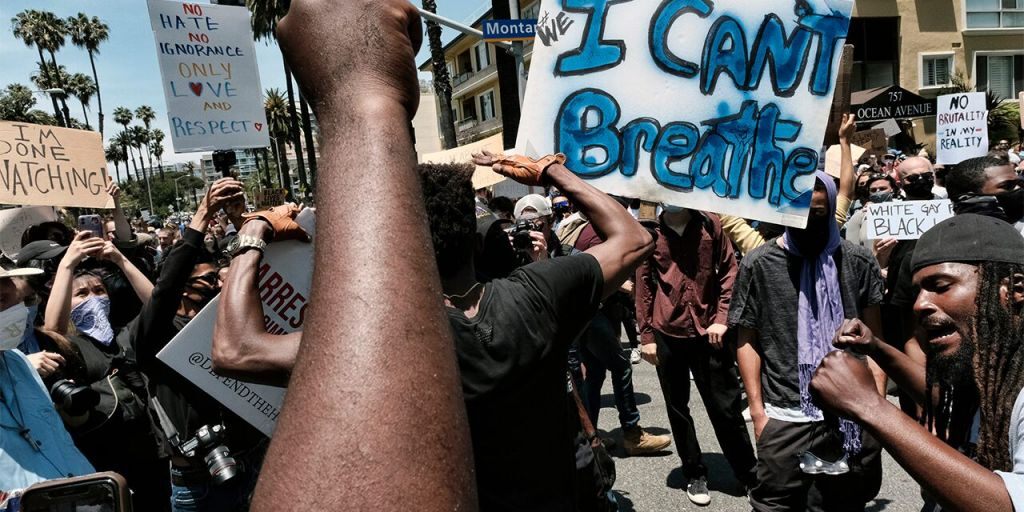 Protesters gathered in Santa Monica on Sunday in another day of unrest over the killing of George Floyd, leading to a curfew that took effect at 4 p.m. They...
by Raquel Jayson June 1, 2020 178 Views

Protesters gathered in Santa Monica on Sunday in another day of unrest over the killing of George Floyd, leading to a curfew that took effect at 4 p.m.

They marched along Ocean Avenue peacefully, some carrying signs as police officers stood near the entrance to the Santa Monica Pier, aerial video shows. But other footage showed people breaking into stores and a police car burning amid the protests.

National Guard troops were sent to the city to assist in mass arrests at 7 p.m., and hundreds were in custody within two hours, Santa Monica Police Chief Cynthia Renaud said.

Dozens could be seen lined up outside Santa Monica High School, awaiting their turn to be detained. Some of those arrested were accused of criminal activity as well as violating curfew, according to Renaud.

Residents were asked to refrain from using 911 unless they have a life-threatening emergency. The city Fire Department said it had received 3,400 calls for service Sunday, up from about 200 calls on an average day.

Demonstrations have surfaced in areas of L.A. including downtown and the Fairfax District in recent days. On Sunday, Sky5 was overhead as Santa Monica police arrived to the area of Colorado and Santa Monica boulevards near the pier.

The city said the curfew will be in place until 5:30 a.m. Monday and will not apply to emergency responders or people commuting to and from work. The curfew was to return Monday, beginning at 1 p.m. in business districts and 4 p.m. in residential areas, officials said.

The county of Los Angeles soon after issued a countywide curfew to take effect 6 p.m. Sunday to 6 a.m. Monday.

“I’m not sure how the rest of the evening is going to go,” O’Day told KTLA. “Hopefully, we can get this place cleared out.”

The streets near the pier, where hundreds had gathered earlier, were mostly empty by 5 p.m., aerial footage shows.

Earlier, protesters walked along a stretch of Ocean Avenue that runs alongside where the Pacific Coast Highway meets the 10 Freeway. Police said off-ramps for both freeways were closed due to police activity in the area.

At 2:20 p.m., a row of police officers stood at the entrance to the pier as people gathered in front of a barricade before them. An hour later, many people had left but a few dozen could be seen still standing a short distance from officers near the pier.

About a half hour earlier, near Fourth Street and Broadway, some people broke into a Van’s shoe store, as seen in aerial footage. It’s unclear if they were there for the demonstrations. At Shoe Palace on Santa Monica Boulevard near the Third Street Promenade, a window was smashed as people looted the store and carried out boxes of merchandise.

Several people were seen running from one area of the shopping center around 3 p.m.

At least two police vehicles were vandalized, and one of them was engulfed in flames, shortly after 6 p.m. on Civic Center Drive near City Hall, aerial footage from Sky5 showed. Later in the hour, what appeared to be a civilian sedan partially gone up onto sidewalk and was burning at the corner of 11th Street and Broadway.

Both blazes were quickly put out by firefighters. Fire officials later said four structures, four cars and one dumpster had burned across the city Sunday.

“I think what scares me about this is that, usually, they wait until dark and then you see the looting,” L.A. County Supervisor Kathryn Barger told KTLA.

By 2:30 p.m., a row of Santa Monica officers wearing helmets stood before an area of Ocean Avenue where protesters were marching earlier. A uniformed officer could be seen holding a large gun, his upper body seen emerging from the roof of a black police tactical vehicle.

A handful of police vehicles were seen behind the officers standing on Ocean Avenue.

“An unlawful assembly has been declared, and we have had a curfew in place,” she said. “At this point, out priority is to protect the safety of the members of the public. We are telling everyone to go home. Tomorrow, we start out recovery.”

“We are asking you to go home, and those who don’t, we will begin notifying and making arrests for the curfew violation,” Renaud said.

Saturday’s protests centered in the Fairfax District were a more chaotic sight, with some climbing onto buildings and a police car going up in flames. But advocates have condemned the violence, and Mayor Eric Garcetti described peaceful protests as being “hijacked” by others.

“Those people out there are demonstrating for something that is very valid,” Lakers legend Kareem Abdul-Jabbar told KTLA Sunday morning after penning an opinion piece in the Los Angeles Times. It was titled “Don’t understand the protests? What you’re seeing is people pushed to the edge” and published Saturday evening amid continuing protests in some parts of L.A.

“The idea that all men are created equal is not really applied to our justice system,” Abdul-Jabbar told KTLA.

Anticipating a fifth night of protests, the cities of Culver City, Beverly Hills, West Hollywood and L.A. joined Santa Monica in declaring a curfew Sunday. The mayor of West Hollywood told KTLA she empathized with protesters and expects demonstrations to continue.

“I think what is fueling, a lot of the anger and a lot of the frustration is a generation of police brutality, of deeply rooted racism and discrimination and communities in … not only Los Angeles but throughout the country,” Mayor Lindsey Horvath said.

“And so, enduring a few days of civil unrest will likely continue if people aren’t getting the message,” she said.

U.S. heads into a new week shaken by violence and outrage over police killings