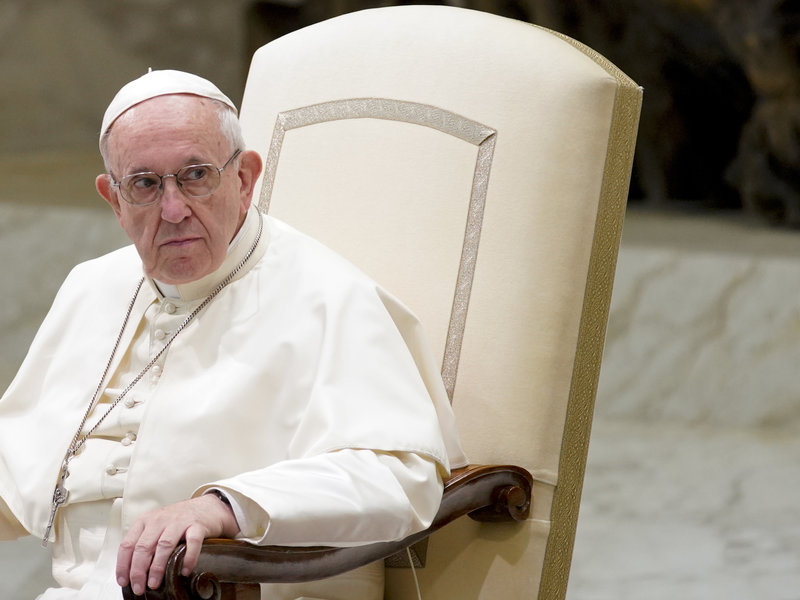 (DUBLIN) — The Vatican’s retired ambassador to the United States accused senior Vatican officials of knowing as early as 2000 that the disgraced former archbishop of Washington, ex-Cardinal Theodore...
by Joy Smith August 26, 2018 355 Views 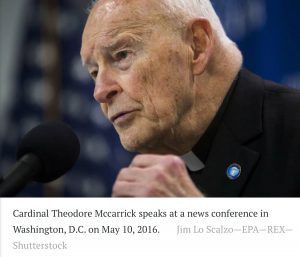 (DUBLIN) — The Vatican’s retired ambassador to the United States accused senior Vatican officials of knowing as early as 2000 that the disgraced former archbishop of Washington, ex-Cardinal Theodore McCarrick, regularly invited seminarians into his bed but was made a cardinal regardless.

The letter, an extraordinary j’accuse from a one-time Holy See diplomat, also accuses Pope Francis of being informed of McCarrick’s penchant for young seminarians in 2013 but of having rehabilitated him — a claim of cover-up against the pope himself.

The National Catholic Register and another conservative site, LifeSiteNews, published the letter attributed to Archbishop Carlo Maria Vigano on Sunday as the pope was wrapping up a two-day visit to Ireland dominated by the clerical sex abuse and cover-up scandal.

Vigano, 77, a conservative whose hard-line anti-gay views are well known, urged the reformist pope to resign over the issue and what he called the “conspiracy of silence” about McCarrick. He and the pope have long been on opposite ideological sides, with the pope more a pastor and Vigano more a cultural warrior.The Vatican didn’t immediately comment on the letter or confirm its authenticity.

In it, Vigano accused the former Vatican secretaries of state under the previous two popes of having ignored detailed denunciations against McCarrick for years. He said Pope Benedict XVI eventually sanctioned McCarrick in 2009 or 2010 to a lifetime of penance and prayer, but that Francis subsequently rehabilitated him.

Francis accepted McCarrick’s resignation as cardinal last month, after a U.S. church investigation determined that an accusation he had sexually abused a minor was credible.

Since then, another man has come forward saying McCarrick began molesting him starting when he was 11, and several former seminarians have said McCarrick abused and harassed them when they were in seminary. The accusations have led to a crisis in confidence in the U.S. hierarchy, because it was apparently an open secret that McCarrick regularly invited seminarians to his New Jersey beach house, and into his bed.

Coupled with the devastating allegations of sex abuse and cover-up in a recent Pennsylvania grand jury report — which found that 300 priests had abused more than 1,000 children over 70 years in six dioceses — the scandal has led to calls for heads to roll and for a full Vatican investigation into who knew what and when about McCarrick.

Vigano apparently sought to answer some of those questions. His letter identifies by name the Vatican cardinals and archbishops who were informed about the McCarrick affair, an unthinkable expose for a Vatican diplomat to make. He said documents backing up his version of events are in Vatican archives.

Vigano, the Vatican’s ambassador to the U.S. from 2011-2016, said his two immediate predecessors “did not fail” to inform the Holy See about accusations against McCarrick, starting in 2000.

He said Francis asked him about McCarrick when they met on June 23, 2013, at the Vatican’s Santa Marta hotel where the pope lives, three months after Francis was elected pope.

Vigano wrote that he told Francis: “Holy Father, I don’t know if you know Cardinal McCarrick, but if you ask the Congregation of Bishops, there is a dossier this thick about him. He corrupted generations of seminarians and priests and Pope Benedict ordered him to withdraw to a life of prayer and penance.”

Vigano wrote he was surprised to find that McCarrick started travelling on missions on behalf of the church soon thereafter, including to China. McCarrick was also one of the Vatican’s intermediaries in the U.S.-Cuba talks in 2014.

Vigano’s claim that McCarrick had been ordered by Benedict to stay out of public ministry and retire to a lifetime of prayer is somewhat disputed, given that McCarrick enjoyed a fairly public retirement. Vigano provides no evidence that such sanctions were imposed by Benedict in any official capacity, saying only that he was told they were.

The letter also contains a lengthy diatribe about homosexuals and liberals in the Catholic church. It often reads like an ideological manifesto, naming all of Francis’ known supporters in the U.S. hierarchy as being complicit in a cover-up of McCarrick’s misdeeds.

“Now that the corruption has reached the very top of the church’s hierarchy, my conscience dictates that I reveal those truths regarding the heart-breaking case of the archbishop emeritus of Washington,” Vigano wrote.

Vigano, however, also has had his own problems with allegations of cover-up, and he and Francis had a major dust-up during Francis’ 2015 visit to the U.S., which Vigano organized.

In that incident, a leading U.S. campaigner against gay marriage, Kim Davis, was among those invited to meet with the pope at Vigano’s Washington residence. Francis was so enraged that Davis’ supporters had leaked word of her meeting that the Vatican subsequently insisted he only held one private audience while there: with one of his former students, a gay man and his partner.

The cover-up accusation, which Vigano denied, concerned allegations that he tried to quash an investigation into the former archbishop of St. Paul-Minneapolis, Minnesota, John Nienstedt, who was accused of misconduct with adult seminarians.

In 2016, the National Catholic Reporter said Vigano allegedly ordered the investigation wrapped up and a piece of evidence destroyed. The report cited a 2014 memo from a diocesan official that was unsealed following the conclusion of a criminal investigation into the archdiocese. No charges were filed.

Nienstedt was forced to resign in 2015 over complaints about his handling of sex abuse cases.

Vigano’s name also made headlines during the 2012 “Vatileaks” scandal, when some of his letters were published in which he begged to not be transferred to the Vatican embassy in Washington from the administration of the Vatican City State. He claimed he was being punished for having exposed corruption in the Vatican. The letters showed a clash with Benedict’s No. 2, Cardinal Tarcisio Bertone, who is also a target of his McCarrick missive.

Trump’s presidency as TV series will be binge-worthy