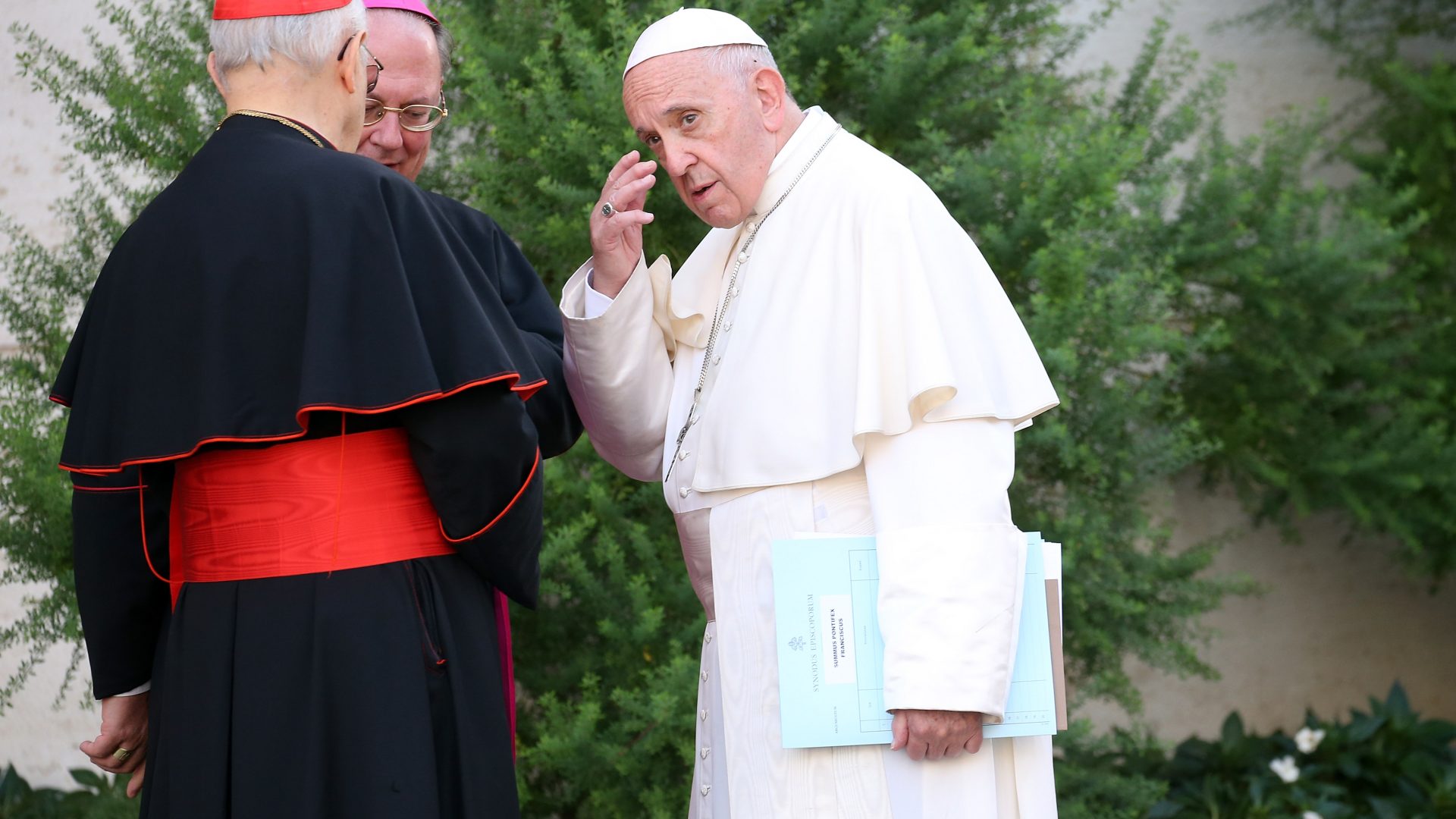 The devil is alive and well and working overtime to undermine the Roman Catholic Church, Pope Francis says. https://www.reuters.tv/v/PPr$/2018/10/08/verbatim-pope-says-devil-is-dividing-church In fact, the pope is so convinced that Satan is...
by Raquel Jayson October 9, 2018 489 Views 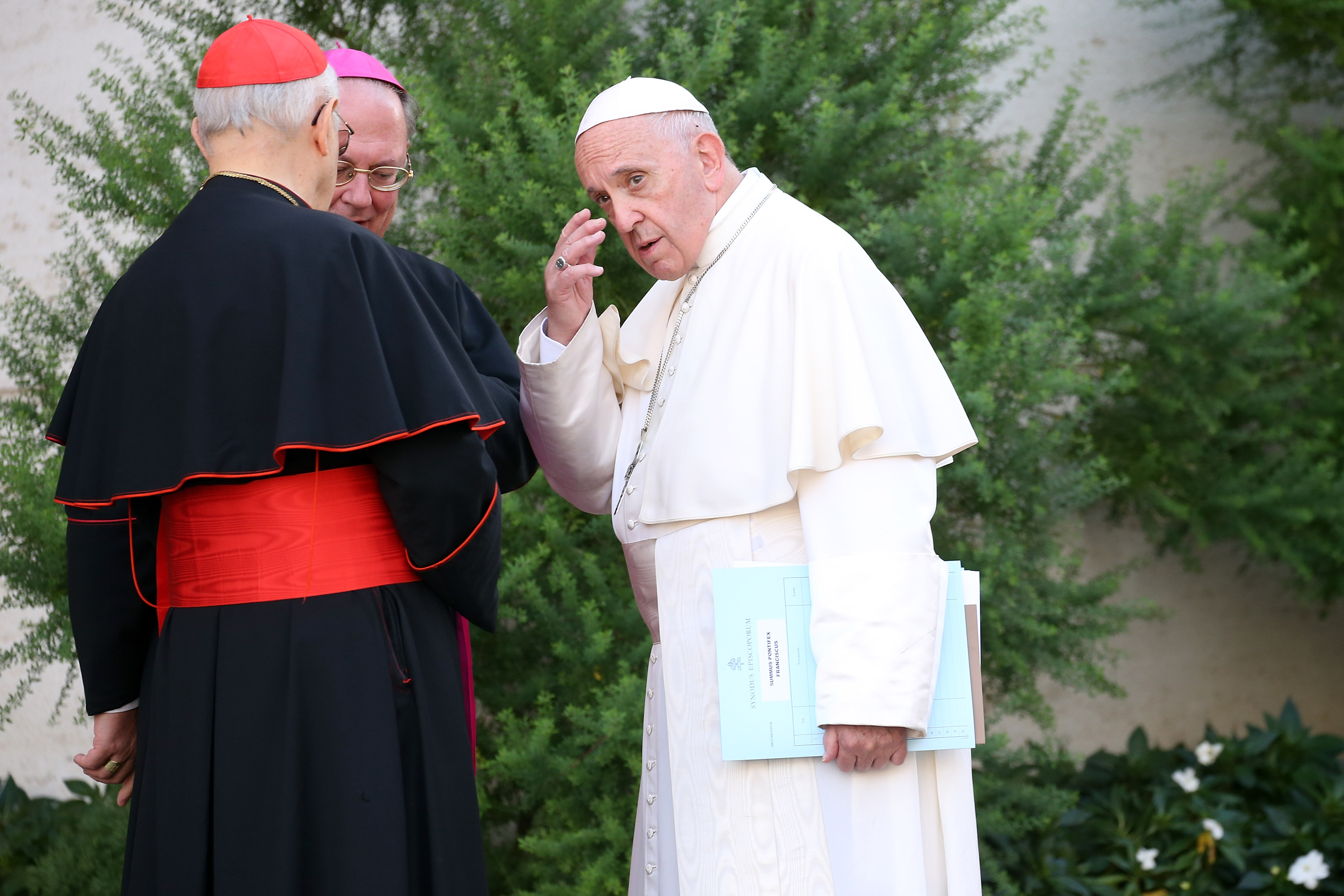 VATICAN CITY, VATICAN – OCTOBER 04: Pope Francis, chats with a bishop and cardinal Lorenzo Baldisseri (C), as he arrives at the Synod Hall for a session of the Synod of Bishops on ‘Young People’ on October 4, 2018 in Vatican City, Vatican. A Synod of Bishops is a crucial moment in the life of the Church. It is a time for it to reflect on its current status and look to its future. (Photo by Franco Origlia/Getty Images)

The devil is alive and well and working overtime to undermine the Roman Catholic Church, Pope Francis says.

In fact, the pope is so convinced that Satan is to blame for the sexual abuse crisis and deep divisions racking the Church that he has asked Catholics around the world to recite a special prayer every day in October to try to beat him back.

“(The Church must be) saved from the attacks of the malign one, the great accuser and at the same time be made ever more aware of its guilt, its mistakes, and abuses committed in the present and the past,” Francis said in a message on Sept. 29.

Since he was elected in 2013, Francis has made clear that he believes the devil to be real. In a document in April on holiness in the modern world, Francis mentioned the devil more than a dozen times.

“We should not think of the devil as a myth, a representation, a symbol, a figure of speech or an idea. This mistake would lead us to let down our guard, to grow careless and end up more vulnerable,” he wrote in the document.

The Church has recently been hit by one sexual abuse scandal after another, from Germany, to the United States, to Chile. At the same time, a deepening polarization between conservatives and liberals in the Church has played out on social media.

Francis’ use of the term “the great accuser” to describe Satan hit a raw nerve with one of the pope’s harshest conservative critics, Archbishop Carlo Maria Viganò, the Vatican’s former ambassador to Washington.

In an 11-page statement published on Aug. 26, Viganò launched an unprecedented broadside by a Church insider against the pope and a long list of Vatican and U.S. Church officials.

He accused Francis of knowing about sexual misconduct by a former U.S. cardinal with male adult seminarians but not doing anything about it.

Viganò, concluding that his former boss had singled him out as the devil in disguise, complained in his next statement that Francis “compared me to the great accuser, Satan, who sows scandal and division in the Church, though without ever uttering my name”.

On Sunday, a top Vatican official issued a scathing open letter accusing Viganò of mounting a “political frame job devoid of real foundation” and contesting his accusations against the pope point by point.

Francis is so convinced that Satan is ultimately to blame for both the sexual abuse scandals and the divisions within the Church that he has enlisted the aid of spiritual big gun – St. Michael the Archangel. Michael is mentioned several times in the Bible as the leader of the angels who ousted Lucifer, the fallen angel, from paradise.

Catholics are being asked to recite the rosary daily in October and conclude it with a prayer to St. Michael that was said after Mass until 1964 but then fell into disuse.

“St. Michael the Archangel, defend us in battle. Be our defense against the wickedness and snares of the devil. May God rebuke him, we humbly pray, and do thou, O Prince of heavenly hosts, by the power of God, thrust into hell Satan, and all evil spirits, who prowl about the world seeking the ruin of souls.”

Cardi B Kills her First Post-Baby Return with ‘I Like It’ Performance at AMAs!