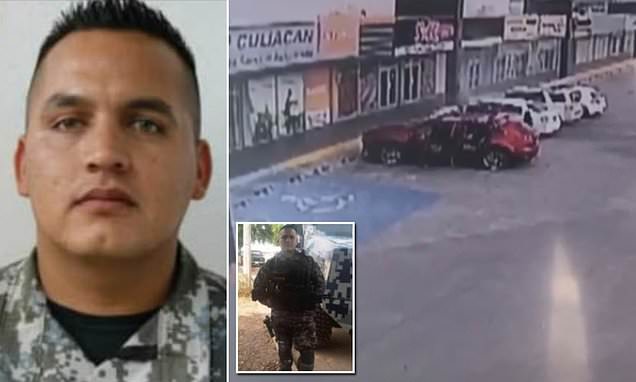 Apolice officer in Mexico who was involved in an operation supporting the arrests of the sons of notorious drug lord Joaquin “El Chapo” Guzman was killed Wednesday by hail...
by Raquel Jayson November 8, 2019 408 Views

Apolice officer in Mexico who was involved in an operation supporting the arrests of the sons of notorious drug lord Joaquin “El Chapo” Guzman was killed Wednesday by hail of more than 150 bullets.

The 30-year-old officer, named by police only as Eduardo N., was killed Wednesday by gunmen in Culiacan, Sinaloa. Eduardo was a high-level officer in Sinaloa’s State Preventive Police.

Mexican newspaper Excelsior shared CCTV footage of the killing, showing the officer parking his white car in a lot outside a shopping center. As he pulls into the lot, a red car carrying his killers appears behind, drawing up alongside the officer.

Armed men leap out, firing rapidly and from close range. Within 30 seconds the attackers had fired 155 shots, leapt back into their vehicle and were gone.

The murder may have been linked to the October 17 arrest of Ovidio Guzman Lopez—a son of El Chapo who in July was sentenced to life in prison by a U.S. court.

The arrest sparked major clashes between security forces and cartel gunmen in Culiacan, which brought the city to a standstill. Security forces eventually released Guzman in an effort to quell the fighting.

Eduardo was not involved in Guzman’s arrest, though was called in to assist the subsequent security operation.

Sinaloa’s Secretary of Public Security Cristobal Castaneda Camarillo said Eduardo was not scheduled to be working on the day of the arrest, but reported to duty given the grave situation.

Gun battles raged for hours as cartel fighters blocked off major roads with burning vehicles, pinned police down in defensive positions and even attacked blocks of flats where officers’ families were living. The government said at least eight people were killed.

Police made Guzman phone the gunmen to try and call off the assault. In a video released by the government, a soldier can be seen shouting at Guzman while gunfire rages in the background. “Tell your people to stop this,” he demanded while holding a mobile phone.

Guzman is then heard pleading, “Call it off, please, I’ve given myself up … Now stop it, calm down, there’s nothing to be done … Tell them to pull back, I don’t want this.”

The attack continued regardless, eventually prompting authorities to free the captive. Explaining the decision later, President Andres Manuel Lopez Obrador said, “This decision was taken to protect citizens. You cannot fight fire with fire.” He added, “We do not want deaths. We do not want war.”

DONNIE McCLURKIN RELEASES NEW SONG “ALL TO THE GLORY OF GOD”

Lil Pump bit by snake on set of music video and it was all caught on video: Watch